In the wake of Frightfest 2018, Signature Entertainment has teamed up with the festival organisers to release six of the titles that premiered there this year. According to Signature this forms Phase 1 of what is presumably a programme intended to provide us with further releases as well. So what did I think of this first batch? Well some are very good indeed and only one is not very good at all, which is a pretty good hit rate. Here is my personal ranking of the six, starting with the best and ending with the not best: 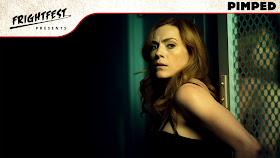 If Harold Pinter and David Lynch (or possibly Nicolas Winding Refn) decided to do a Robert Bloch-style psycho noir, the result could well be something like PIMPED. Bored Sarah (Ella Scott Lynch) goes out for a night on the town and meets Lewis (Benedict Samuel). Unknown to Sarah, Lewis procures girls for his socially dysfunctional rich friend Kenny (Robin Goldsworthy) to have sex with. Unknown to Lewis, Sarah has an imaginary friend who encourages her to kill. What happens when these individuals' two twisted worlds collide is explored with serious amounts of style in David Barker's feature debut. I wasn't expecting anything from this and I ended up loving it. The leads are extremely watchable and the ending is just right. One of the best of Frightfest 2018 and highly recommended. 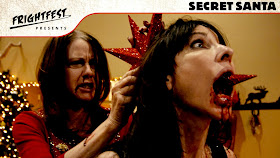 A Christmas family get-together degenerates rapidly into psycho loony murderous mayhem for reasons that eventually become explained in this utterly entertaining piece of daft splatter. Director Adam Marcus is best known for FRIDAY THE 13TH PART IX: JASON GOES TO HELL but this is much better and far more entertaining. The sharp script by Marcus and Debra Sullivan contains enough barbed wit to allow SECRET SANTA to be compared favourably to the best of John Waters. If the movies of Mr Waters, plus a healthy dose of splattery violence appeal then don't miss this. One of the bloodiest, craziest and most enjoyable films of Frightfest 2018 and an ideal Xmas treat for those who tend towards cynicism during the festive period.

In which we are witness to the life of our chatty (by voiceover) central character whose name we never learn. But then that's because he / she has the habit of stealing people's bodies (leaving the originals as dried out corpses) and living in them until they start to fall apart. Unfortunately that particular problem is starting to accelerate, meaning when the film starts the body switching is now almost on a daily basis. Also complicating matters is the fact that our lead is in love, and his / her repeated attempts to get together with the lady in question adds a satisfying complexity to this strange, original and thoughtful drama. 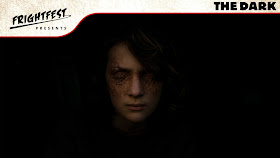 An even more serious offering is this, director Justin P Lange's feature debut that expands on his short film of the same name. Despite its often grim theme and scenes of bloodshed, there's something of fairy tale about THE DARK, featuring as it does two young leads and a myth about a beast living in the forest in which they find themselves being pursued. I'm being deliberately vague because this is a film that works best if you don't know too much about it going in, suffice to say that THE DARK features some excellent makeup effects, good performances and skilful direction that means Mr Lange is a talent to watch.

It's time for some giant animatronic monster pig on the loose fun with a cast of familiar genre faces. John Jarratt (WOLF CREEK & PICNIC AT HANGING ROCK) Bill Moseley (TCM 2, DEVIL'S REJECTS etc etc), Roger Ward (MAD MAX) and Steve Bisley (MAD MAX as well) are among the stars appearing in director Chris Sun's tale of a giant boar on the rampage in rural Australia. What could be smashing down fences and eating livestock? And locals? It soon turns out it's not the best time to go camping / drinking / having a family day out as the monster of the title has a field (sorry) day having a jolly old chomp. BOAR can't quite decide if it wants to treat its plot seriously or go full Joe Dante PIRANHA (my preferred option, of course) but you have to have time for any film where they've built a life-size gigantic pig for the action scenes rather than rely on too much CGI. 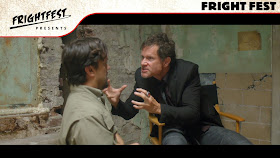 Or AMERICAN FRIGHT FEST as the title card would have it, presumably to distance itself from our dear old UK original. Here we have the mayor of a small American town proposing a novel way of generating income by turning the town's long-closed asylum into a horror amusement attraction 'directed'  by coke-addled horror has-been director Spencer Crowe (Dylan Walsh). On opening night what nobody (least of all the actors employed in the scary 'roles' as part of the attraction) realises is that earlier in the day Spencer caused an accident that resulted in the release of a couple of dangerous psychopathic criminals who are determined to become part of Fright Fest. Sound fun? Well it probably is but only if you're very very forgiving, because FRIGHT FEST is the only genuine dud in this batch of six films. Urgently in need of some of the electric shock therapy that gets dealt out in the movie, it's pretty bland and lifeless stuff that will have any but the least demanding horror fan looking at their watch by the thirty minute mark.

...and finally here are the proposed release dates for the movies. According to Signature this is when these movies will receive their 'Home Entertainment Release' which will presumably be VOD. I'll update this post with any additions or alterations as they are announced: