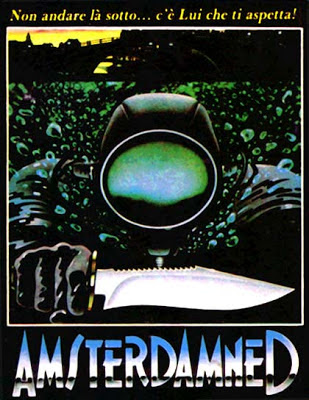 How could anyone resist a film with a title like that? Just re-released on the Shameless DVD label in the UK, this Dutch slasher movie could almost be considered a giallo, except instead of a black-gloved killer we have a black wet-suited diver in a gimp mask terrorising the canals of Amsterdam. The movie opens with the murder of a prostitute whose body is then discovered the next morning in the kind of hilariously grotesque setpiece that the League of Gentlemen would be envious of. Eighties fashion victim and tight blue underpant-wearing detective Huub Stapel is soon on the case along with his muscle bound yellow wetsuit (aaargggghhh!) attired sidekick, but they can’t stop the next murder. “He was a vegetarian,” says their completely mental and somewhat overenthusiastic pathologist colleague. “His stomach was full of the usual slop – you know – lentils and the like”. Eyewitnesses are similarly unhelpful. “That old lady said it was a big black monster with claws,” says Huub’s sidekick. “Then my mother-in-law had better have a good alibi” he quips in reply (and this after the two have just met each other for the first time in thirteen years with the exchange “You stole my girlfriend” “Don’t worry I won’t do that again.”).

More murders occur but who is the killer? Is it Huub’s sidekick who likes diving? Or his new girlfriend who likes diving? Or perhaps her psychiatrist who used to like diving but doesn’t anymore – or so he’d like us to believe? The fact that the killer’s identity is even better and more bonkers than I could possibly have hoped for is just one of the many reasons why this really is a splendid little horror film. Another is that it’s the only slasher movie I've ever seen to feature the most fantastic, thrilling, well-shot and hilarious speedboat chase around the canals of Amsterdam as a climax.
Director Dick Maas also made THE LIFT (which I’ve yet to see) and SAINT (which I have and which is a cracking Santa Claus horror picture) which premiered at FrightFest in 2011. AMSTERDAMNED is nearly two hours long but a witty script, endearing actors, and a director who really knows what he’s doing means the time just flies by.
Posted by John Llewellyn Probert at 9:47 am 1 comment: 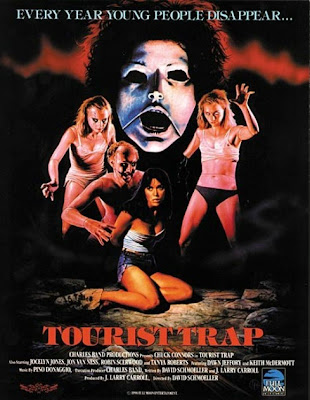 A peculiar mix of hillybilly-style slasher and House of Wax, David Schmoeller’s backwoods American romp has enough style, spookiness and outright weirdness to elevate it above a genre that at its time of release was soon to become as tired as the masked maniac in each of these pictures must have been after chasing victims, stringing them up, and managing cunning bouts of engineering to enable the bodies of all the victims to drop onto the final girl at appropriate moments.
Eileen and Woody are driving through the kind of deserted American countryside where it would probably be an awful idea to get a flat tyre, when naturally that’s what happens. Eileen waits with the car while their friends Becky, Jerry and Molly catch up in another vehicle. Woody goes in search of a gas station, only to find himself set upon by a roomful of mannequins that have come to life, as well as an assault of random flying objects, one of which eventually skewers him. The others find a tourist trap waxworks run by dungaree-suited Mr Slausen (Chuck Connors). As the friends are bumped off by either a masked killer or more animatronic dummies it becomes obvious that far from being not all there, there may be more than one person living in Mr Slausen’s head.
TOURIST TRAP has few of the elements that would soon become de rigeur for a slasher picture. It does have a bunch of teenage victims and an older tormentor in the shape of crazy Chuck Connors and his collection of scary masks and animatronic mannequins. It’s never a good idea to trust a man who keeps the body of his dead wife upright in a glass case surrounded by flashing lights and a melancholy musical accompaniment, and in that much our teen heroes deserve their fate.
But what exactly is their fate? The final scene makes little sense, with final girl Molly (Jocelyn Jones) driving down the highway, presumably having escaped, but in the company of mannequin versions of her friends. It’s strange little touches like this, as well as the whole opening murder of Woody, that makes TOURIST TRAP worth a look. Also of note is the music score by Pino Donaggio, who was kept very busy by low budget US filmmakers in this period. Apparently working on the score to Joe Dante’s PIRANHA at the time of TOURIST TRAP’S shooting, Donaggio was approached by Schmoeller who convinced him to provide a typically lush score with a somewhat peculiar clockwork-sounding main title theme that is evocative of the animatronic devices we are about to see. It’s an eccentric score for an eccentric film and while David Schmoeller worked in the horror genre several more times he never made anything quite as weird or special as this.
Posted by John Llewellyn Probert at 8:57 am 3 comments: