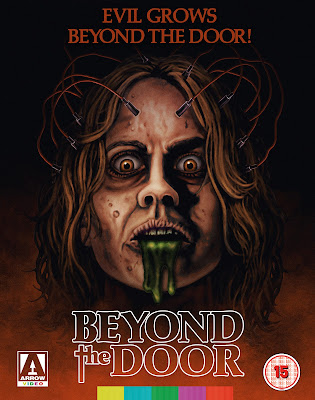 "Did the Devil Make Them Do It?"

Arrow really does go the extra mile to bring us an extras-packed edition of some ropey old Italian EXORCIST ripoff tat with their limited edition brand new 2K restoration Blu-ray release of Ovidio Assonitis' BEYOND THE DOOR aka CHI SEI? (the original Italian title, which means Who Are You?) aka THE DEVIL WITHIN HER (not to be confused with sleazy Joan Collins baby dwarf possession movie better known to trash fiends as I DON'T WANT TO BE BORN)  aka BEHIND THE DOOR aka TO SPERMA TOU ANTICHRISTOU (that's the Greek title). 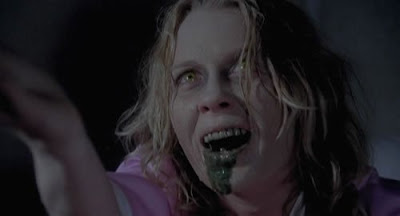 Juliet Mills tells record producer husband Gabriele Lavia (and his lovely hair) that she's inexplicably pregnant, and getting exponentially more pregnant each day. "Will my baby be born deformed?" she asks her doctor. Well yes it probably will be seeing as he's just X-Rayed her (this was before we all realised that doing such a thing could result in a short and angry medicine man destroying the local hospital in William Girdler's THE MANITOU). 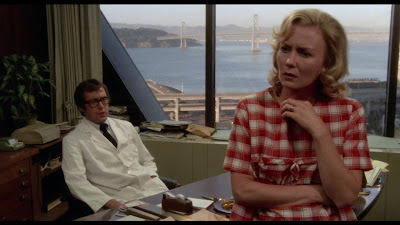 Not a lot happens that makes any sense, meaning we are firmly in the sub-genre of Italian cinema more or less pioneered by Riccardo Freda and friends and propagated by Lucio Fulci et al, where it's more important to evoke mood than be coherent. And oh there's a lot of mood in BEYOND THE DOOR. Some of it is odd, some of its laughable and occasionally some of it is unnerving. Richard Johnson lurks around as someone who has made some kind of deal with the devil who, by the way, thoughtfully introduces this in a weird pre-credits sequence that helps us to understand what follows not a jot. 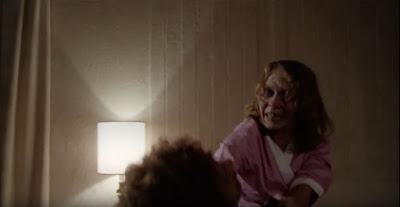 In many ways BEYOND THE DOOR could be seen as a precursor / the inspiration for Giulio Paradisi's THE VISITOR (1979), in which Mr Assonitis also had a hand. Juliet has two children. One is a little boy who constantly sucks pea soup with a straw out of Campbell's soup cans she's presumably punched a hole in the top of and who is so obsessed with the stuff he has a poster of a soup can on his bedroom wall. The other is a little girl who carries a stack of copies of the Coronet paperback of Erich Segal's Love Story round with her and talks as if her lines were written for someone rather older and when they cast the role nobody bothered to change her dialogue from petulant teenager to annoying tweenager. 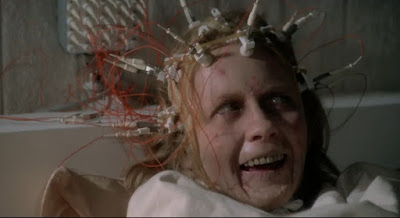 But there's more! Don't focus on Juliet when she runs out of that San Francisco health clinic - look to the left at that small boy trying so hard to push the door open! Marvel at that completely ineffective score and the lifeless dialogue scenes that desperately need music but don't have any, matched only by the bits where they obviously lost the sound altogether but kept the footage in anyway. It's all very, very strange. The ending makes no sense at all, but I suppose anyone who had stuck it out until then would be disappointed if it did.  BEYOND THE DOOR made a fortune so what do I know? Maybe 1970s audiences were forgiving and / or starved for this kind of thing. 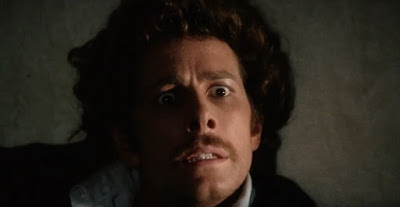 Arrow's extras are hugely impressive. If you're a fan it will take you a weekend to go through everything. Two commentary tracks -  Juliet Mills on one, Assonitis on the other; a stack of new interviews with the director, cinematographer, composer, camera operator and an audio one with star Gabriele Lavia; alternate opening titles - Italian, Japanese and VHS; trailers TV and radio spots; archival featurettes and interviews (including one with Richard Johnson) and an image gallery.
And that's just Disc One. 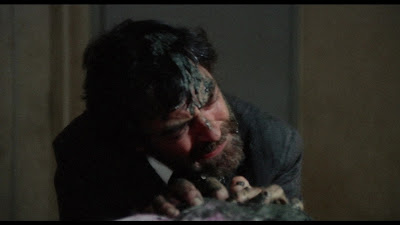 Disc Two has the alternate US theatrical version of the film, but the most surprising and welcome extra is a feature-length documentary on Italian EXORCIST ripoff movies, with interviews with key personnel involved as well as academics and experts. Other extras include archival interviews with stars Lavia and Mills. 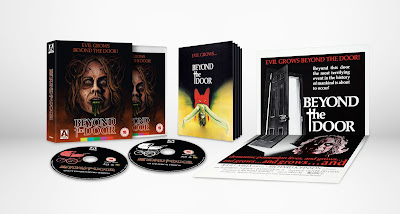 It's a remarkable package for a quite remarkable film. BEYOND THE DOOR obsessives get your orders in, because your dreams have just come true.

Ovidio Assonitis' BEYOND THE DOOR is out from Arrow Films in a limited edition (of 3000) two disc
Blu-ray set on Monday 30th March 2020
Posted by John Llewellyn Probert at 7:38 am No comments:

Email ThisBlogThis!Share to TwitterShare to FacebookShare to Pinterest
Labels: 1970s, Exorcism Movies, Italian Horrors, Trapped in the Room With It 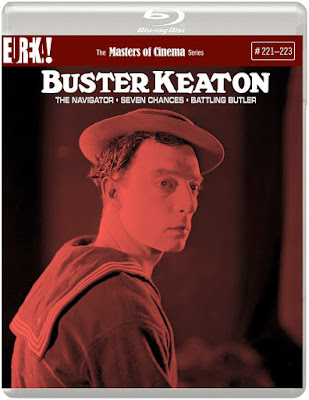 Eureka continues its essential work of ensuring there are as many Buster Keaton 4K restorations on Blu-ray on UK shelves as possible with the release of three more of his longer works. I previously reviewed Volume One in the series here and Eureka's impressive box set of Keaton's short work here. As with the previous volume this one comes with a 60 page book and a wealth of extras on the discs. So what do we get this time around? 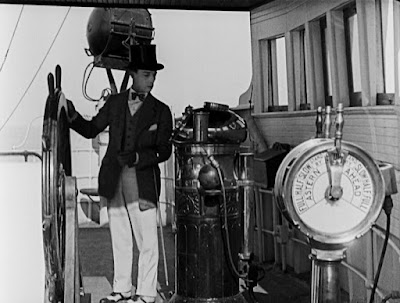 Coming after SHERLOCK JR, THE NAVIGATOR was the biggest hit of Keaton's career. He plays rich Rollo Treadway, who gets on the wrong boat after plans for a honeymoon in Honolulu go awry. However, his bride to be, Betsy (Kathryn McGuire) has also got on the same boat and together they find themselves adrift and alone, without a clue how to power the vessel, or even cook dinner. Encounters with cannibals and creatures of the deep do not help. 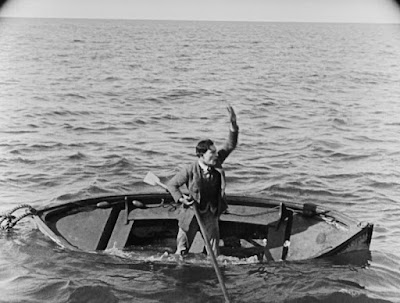 Extras include a commentary track by film historians Robert Arkus and Yair Solan, Boats Brides & Boxers -  a 34 minute video essay by David Cairns covering all three films in the set, and Of Buster, Boats, Other Seacfraft and Working on THE NAVIGATOR, a nine minute featurette by Bruce Lawton. 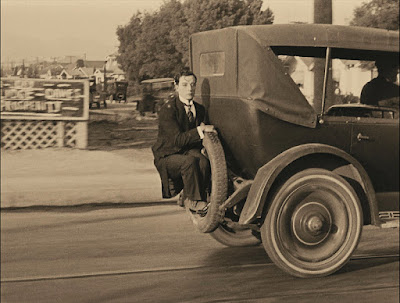 Buster is Jimmy Shannon, junior partner in a law firm that is horrifically in debt. His problems may be solved when he inherits seven million dollars.The only problem is he has to be married by the end of the day. A climax that involves Keaton being chased by hundreds of potential brides through a number of increasingly perilous-looking set-pieces makes SEVEN CHANCES possibly the highlight of the set. 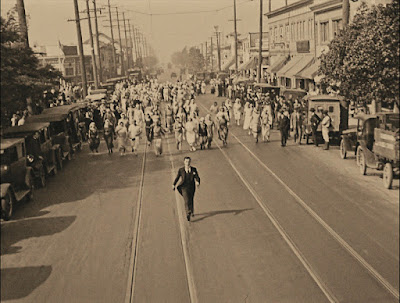 Extras include a commentary track from Joel Goss and Bruce Lawton and there's an extra twenty minute Keaton short, WHAT! NO SPINACH? as well. 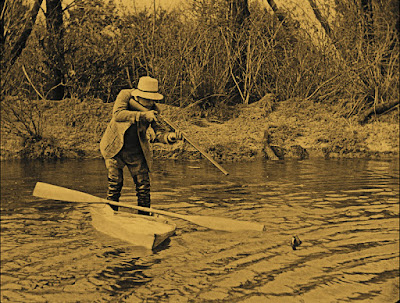 Keaton is rich spoiled dandy Alfred Butler, sent into the wilderness to 'be a man' by his father. With only his trusty manservant, a huge tent, several suit changes and enough posh gear to equip an army, Alfred discovers love in the mountains. However, the girl's family only agrees to allow him to marry after they are led to believe he is another Alfred Butler, prizewinning lightweight boxer who is shortly due to take on The Alabama Murderer. Apparently BATTLING BUTLER was one of Martin Scorsese's inspirations when making 1980's RAGING BULL. 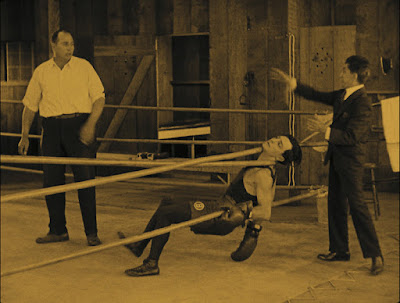 Extras on this disc are five different audio interviews with Buster Keaton adding up to three hours' worth of material, as well as the trailer for the film.

The accompanying book contains new writing on all three films and the whole thing comes in the kind of limited edition hardbound slipcase that this kind of set deserves. Another winner from Eureka,

Buster Keaton: Three Films Volume 2 is out on Blu-ray from Eureka on Monday 30th March 2020

Posted by John Llewellyn Probert at 8:49 am No comments: 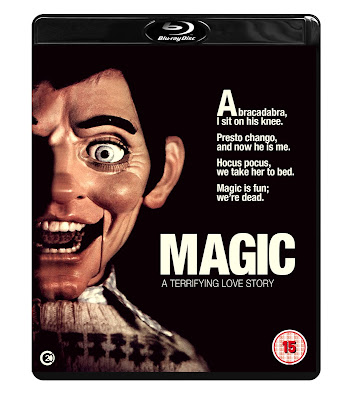 Richard Attenborough's film of William Goldman's novel gets a sparkling UK Blu-ray release courtesy of Second Sight.
Down on his luck magician Corky Withers (Anthony Hopkins) finds success when he incorporates ventriloquism into his act in the form of the foul-mouthed Fats (also voiced by Hopkins). Fame and national television beckon but Corky's not so keen on taking the necessary medical required by the TV network, despite the insistence of his agent Ben (Burgess Meredith). Panicking, Corky takes off for the town of his birth, not realising that taking Fats with him will lead to tragedy. 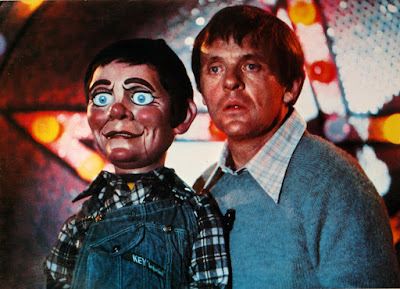 The  Michael Redgrave 'dummy' segment of the classic DEAD OF NIGHT is always mentioned in the same breath as MAGIC and it's easy to see why, but where the Ealing film's emphasis is on the isolated nightmare of a fragmenting mind, MAGIC opens up the idea to show the effect it has on those around the sufferer. The fact that this works so well is down to the lead performances, including Ann-Margret who plays Corky's lost love Peggy. Attenborough takes Corky away from the hustle and bustle of New York to somewhere so gloomy and wet anyone from Wales will swear Hopkins has actually gone all the way to his real place of birth. 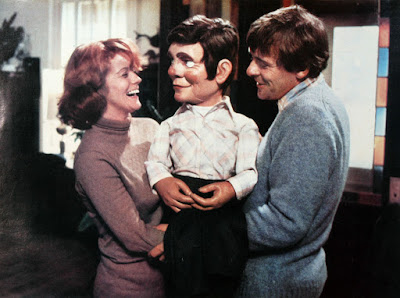 And Hopkins really is the star of MAGIC, delivering a subtle, nuanced, twitchy performance that increasingly teeters on the edge of barely repressed madness. You know he's going to crack but are not at all sure when it's going to happen. Thank goodness he was the star and not Klaus Kinski. 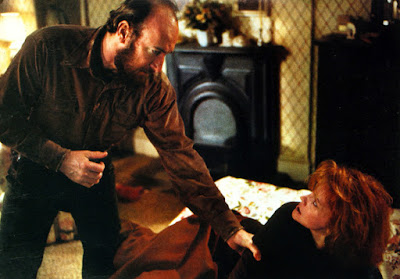 Disc extras include a revealing interview with William Goldman, archival video and radio interviews with Hopkins, a piece on cinematographer Victor Kemper and an Ann-Margret makeup test. Also included is Fats and Friends, a decent 30 minute featurette on ventriloquism (including its appearance in movies) by the man who was the consultant on MAGIC and who was often just out of shot operating Fats. 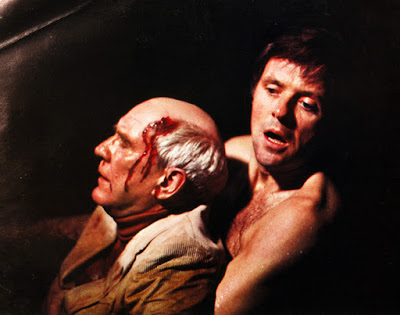 The transfer is excellent, by the way - MAGIC has never looked this good, and with the extras on board, Second Sight have given us the definitive package of Attenborough's film.

MAGIC is out on UK Blu-ray from Second Sight on Monday 23rd March 2020
Posted by John Llewellyn Probert at 8:01 am No comments: 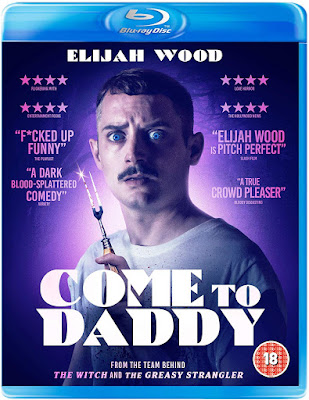 "Winning Directorial Debut from the Producer of ABCs of Death" 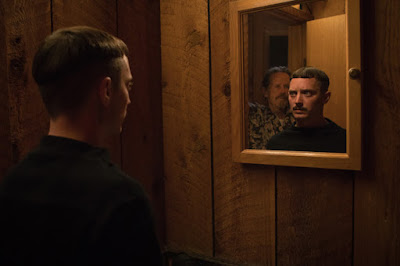 Urban hipster Norval (Elijah Wood) receives a letter from the father he hasn't seen since he was five inviting him to the man's remote Oregon home. When Norval gets there he is met with nothing but animosity, threats, and a refusal to discuss why his father has even invited him from a man superbly played by Stephen McHattie. 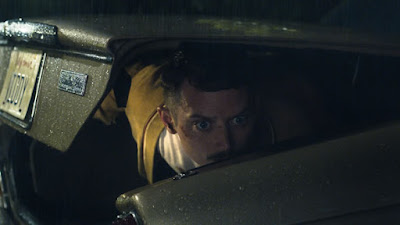 Then something happens that plunges Norval into a world I wasn't expecting at all & neither will you which is why I'm not going to say any more. Great performances, a quirky script from Toby Harvard (who co-wrote THE GREASY STRANGLER but don't let that put you off) and carried off with a serious amount of style from director Ant Timpson (the man behind THE ABCS OF DEATH) COME TO DADDY is as the 2019 Frightfest programme put it, a 'deliciously edgy stunner'. 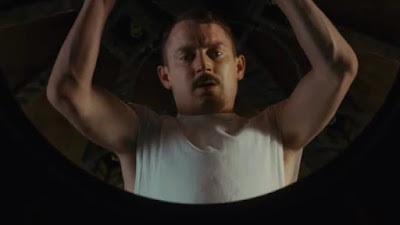 Extras on the Blu-ray (but not the DVD) include CRAB BOY, Ant Timpson's eleven minute bizarre black and white first short film. Is this the only movie to credit the creator of 'Crab Gloves'? You also get a Michael Smiley red carpet interview, and a far more indepth interview with Ant Timpson conducted by Paul McAvoy, where Timpson talks about, amongst other things, the extraordinary real-life situation that inspired his original idea. No commentary track unfortunately, but you do get 5.1 surround and 2.0 stereo sound options. 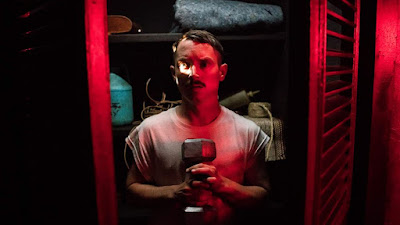 Ant Timpson's COME TO DADDY is available from Signature Entertainment's Frightfest Presents label on digital HD from 21st February 2020 and on UK Blu-ray and DVD from 2nd March 2020
Posted by John Llewellyn Probert at 9:02 am No comments: