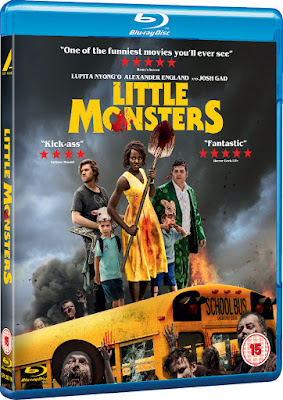 It's not the month (or year) to give up on Zom-Rom-Coms as Abe Forsythe's Australian entry into the subgenre (or is that sub-sub-subgenre?) gets a DVD, Blu-ray and digital download release from Altitude. 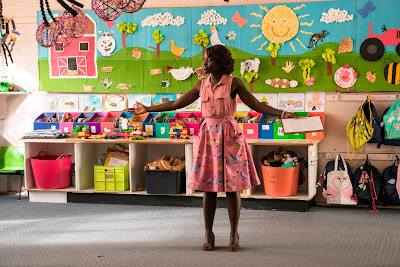 Unemployed terrible stadium rock / thrash metal busking guitarist Dave (Alexander England) leaves his estate agent girlfriend in an opening sequence so full of swearing and general relationship break-up hatred that it's almost worth the price of admission on its own. Dave ends up having to sleep on the couch of his older sister Tess (Kat Stewart). 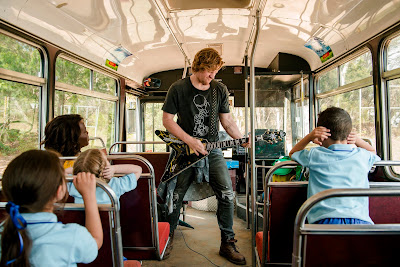 Tess has a five year old son, Felix (that rare thing in cinema, a likeable child performance, in this case from Diesel La Torraca). Dave takes Felix to school one day and becomes immediately enamoured of Felix's pretty teacher Miss Caroline (Lupita Nyong'o), so much so that when a fellow teacher has to back out of accompanying the kids on their school trip to a local animal park Dave volunteers to help out. 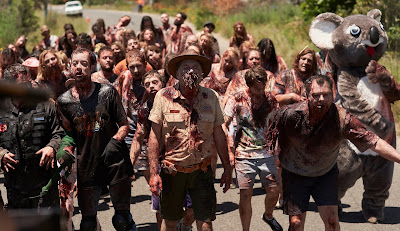 Much ukelele playing and singing of a certain Taylor Swift song on the bus later they arrive, unaware that the US Military Research Facility next door to the animal park has suffered a zombie outbreak. Chaos ensues and Dave, Miss Caroline and the kids end up trapped in the gift shop. 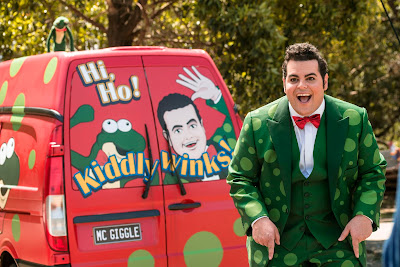 Starting off with high gear comedy that comes thick and fast, by the time LITTLE MONSTERS settles into its zombie siege plot it still has plenty of laughs to offer. The leads are likeable and funny and have great chemistry, and there's an excellent over the top slimy turn from Josh Gad as "No.1 Nickelodeon Children's Entertainer For Five Years Running" Teddy McGiggle.

Director Abe Forsythe has apparently been signed to the new reboot of ROBOCOP and after watching this I'd say that finally the future of law enforcement couldn't be in better hands. LITTLE MONSTERS is funny, charming, blood-splattered and a delight to watch. And it has a glove puppet frog. A great start to the year.

LITTLE MONSTERS is out on DVD, Blu-ray and Digital Download on Monday 10th February 2020

Posted by John Llewellyn Probert at 8:49 am No comments: 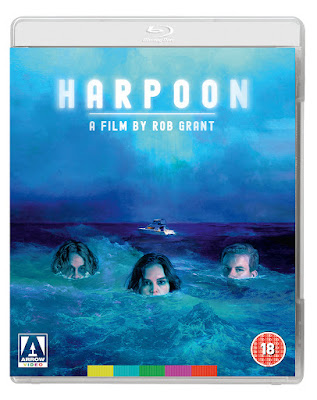 Three friends on a boat trip encounter deception, disaster and death in Rob Grant's tightly plotted HARPOON, now getting a Blu-ray release from Arrow.
Richard (Christopher Gray) is rich and has a terrible temper. Sasha (Emily Tyra) is Richard's long-suffering nurse girlfriend. Jonah (Munro Chambers) is Richard's much more poorly off best friend. When Richard intercepts a text message from Sasha to Jonah he immediately jumps to the conclusion that she and Jonah are having an affair and as a consequence beats Jonah up. But no! They were just discussing the purchase of Richard's birthday present - a harpoon gun. 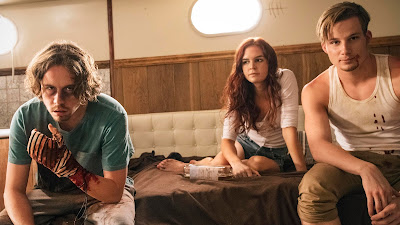 By way of an apology, Richard takes them for a day trip on his boat, where unfortunately for all three it turns out Jonah and Sasha have actually been seeing each other. Much smashing up of radio equipment and throwing off the boat of useful things later, and the three find themselves stranded at sea in a boat that doesn't work with only half a small pot of drinking water and a couple of mustard sachets for food. Richard is convinced someone will pick them up. No-one does. 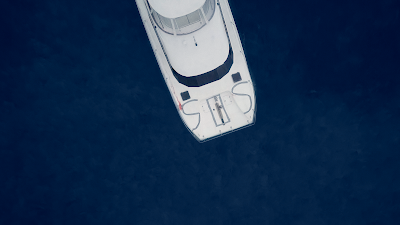 A three hander that never lets up for its 82-minute running time, HARPOON starts off deceptively cocksure, with a voice-over narration that could have overbalanced everything but which you realise as you go along is just right. Thinking you're in for a shouty comedy means that when events take a darker turn they're all the more effective, and the director's original pitch of 'Seinfeld meets KNIFE IN THE WATER' is a perfect description.
Arrow's Blu-ray comes packed with extras. It premiered at London's Frightfest last year and you can relive the experience with the intro and Q&A that took place there (and you get to hear my voice at one point - now you want the disc, don't you?). 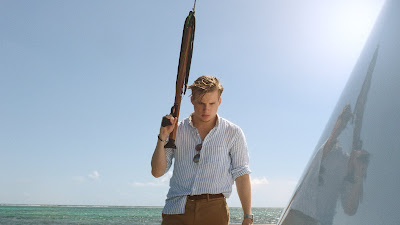 There are two commentary tracks. The first is with writer-director Grant and his two producers. Grant ingests magic mushrooms and goes solo for the 'Director's Psychedelic Commentary' which, considering that, is remarkably focused and far less deranged than you might be expecting. 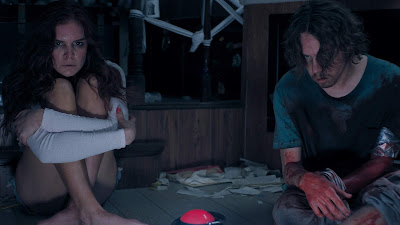 You also get a 30 minute making of, deleted scenes, B-roll footage (with commentary), Frightfest interviews, a trailer and reversible sleeve. The first pressing comes with a booklet with new writing on the film from Amy Simmons. HARPOON was one of the best movies of last year (it's on the HMC Top 20) and is fully deserving of this extras-packed presentation.

Rob Grant's HARPOON is out on Region B Blu-ray from Arrow on Monday 27th January 2020
Posted by John Llewellyn Probert at 10:23 am No comments: 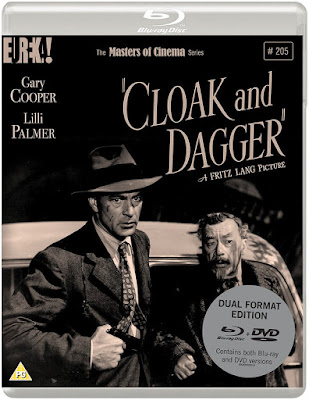 The film Fritz Lang made as his follow up to 1945's SCARLET STREET gets a UK dual format DVD & Blu-ray release courtesy of Eureka. 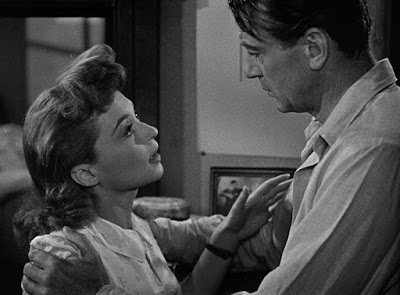 World War II. Alvah Jesper (Gary Cooper) is a nuclear physicist who gets recruited by America's Office of Strategic Services. He's sent to Switzerland as an undercover agent to meet up with former colleague Katarin Lodor (Helene Thimig) regarding the Nazis plan to construct an atomic bomb. 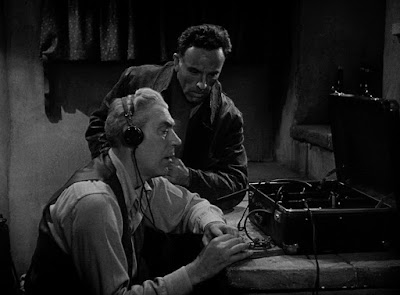 However, things go wrong when Katerin is killed and Alvah finds himself travelling to Italy to meet Dr Giovanni Polda (Vladimir Sokoloff) whose daughter has been kidnapped by the Nazis so that he will work for them. 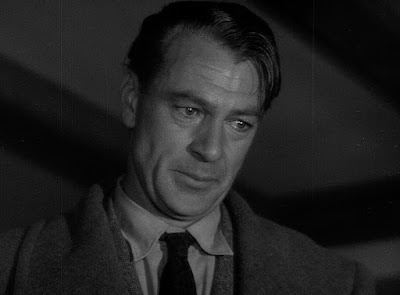 Alvah joins forces with resistance fighter Gina (Lilli Palmer in her first Hollywood role) and together they plan to smuggle Dr Polda out of Italy. But there are plenty of obstacles in their way. 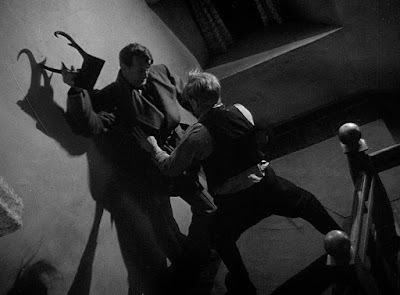 A stylish wartime espionage picture with Cooper and Palmer having great onscreen chemistry, CLOAK AND DAGGER was the plot template for 1984 Jim Abrahams / Zucker Brothers spoof TOP SECRET! Admittedly Gary Cooper's science professor does possess a somewhat unbelievable ability to beat up bad guys but treated as the piece of suspenseful action cinema it was intended as it still holds up as a fun ride. 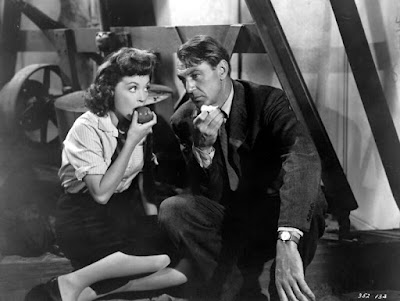 Eureka's disc gives us a brand new commentary track from Alexandra Heller-Nicholas, a new video essay from David Cairns, a 1946 radio adaptation of the story starring Lilli Palmer and Ronald Reagan, 11 hours (!) of Cloak and Dagger: The Radio Series and a booklet with new writing on the film from Samm Deighan.

Fritz Lang's CLOAK AND DAGGER is out from Eureka on dual format on Monday 27th January 2020
Posted by John Llewellyn Probert at 9:04 am No comments: 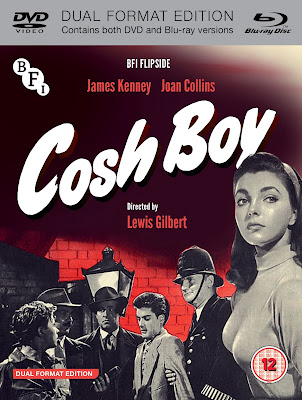 Lewis Gilbert's tale of juvenile delinquents causing mayhem in post-war London gets a dual format DVD and Blu-ray presentation as the 40th release in the BFI's tremendous Flipside series. 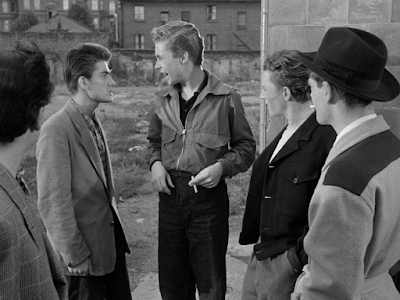 Teenager Roy (James Kenney) is a complete bastard. When he's not being rude to his granny, forgetting his mum's birthday or beating up old ladies to get their handbags he's ruthlessly seducing 16 year old Rene (Joan Collins) and driving her to attempting suicide when he finds out she's pregnant. He and his gang go on a series of crime sprees that escalate to the point where firearms are involved, and it's not long before Roy's entire world collapses in on him. 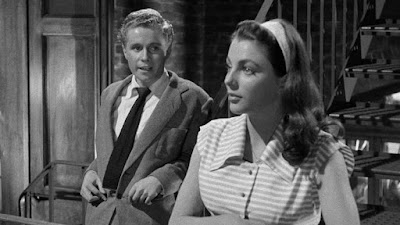 Opening with the kind of ballyhoo prologue statement that we'd still be seeing twenty years later in Pete Walker's 1973 HOUSE OF WHIPCORD, before we even get to the credits COSH BOY is warning us of the dangers that juvenile delinquency might escalate to in this country if strict discipline is not instigated. Of course translated that means 'You are about to see a smashing film', and COSH BOY is nothing if not salacious and edgy for its period. Indeed, while other BFI Flipside release from the era like BEAT GIRL now seem like harmless silliness, COSH BOY, for all its breathless 'ripped from today's headlines' X-certificate adult-entertainment content is still remarkably grim underneath, depicting a country that has lost so many of its men in the war that the younger generation, and as a consequence society as a whole, had been affected immensely as a result. 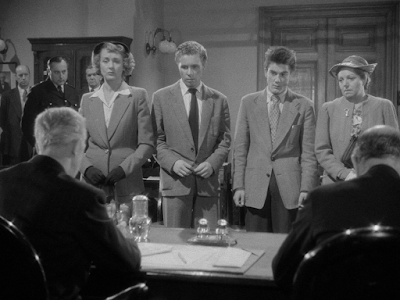 Hammer fans will note the presence of several key personnel in the credits. COSH BOY is photographed by Jack Asher, Anthony Nelson-Keyes was production supervisor and the music director is Phillip Martell. Perhaps most interesting  of all is the production design by Bernard Robinson, whose backstreet sets here echo some of the work he would later do for Hammer. 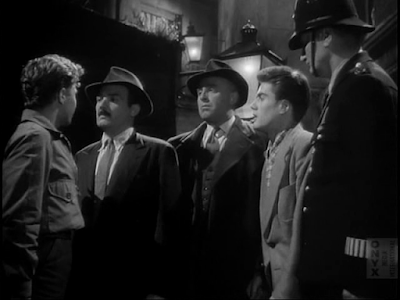 The BFI's HD transfer of COSH BOY looks excellent, with a clean, sparkling print. Extras include some Lewis Gilbert shorter subjects - THE TEN YEAR PLAN (1945 with Charles Hawtrey), JOHNNY ON THE RUN (1953 for the Children's Film Foundation) and musical comedy HARMONY LANE (1954).
You also get STRANGER IN THE CITY (1961) a short film from director Robert Hartford-Davis (CORRUPTION) about Soho, TEDDY BOYS (1956) and an interview with Ian Whitaker who plays one of the cosh boys. The first pressing also gets a smart little booklet with new writing on the film.

Lewis Gilbert's COSH BOY is out on Blu-ray and DVD from BFI Flipside on Monday 20th January 2020
Posted by John Llewellyn Probert at 9:11 am No comments: