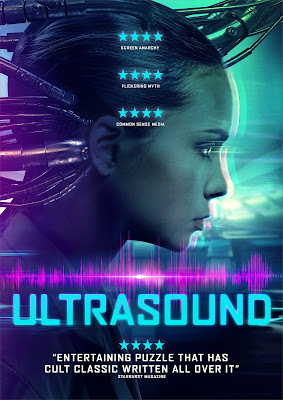 Director Rob Schroeder's movie of screenwriter Conor Steechschulte's adaptation of his own graphic novel Generous Bosom, which premiered at last year's London Frightfest, gets a digital release from Blue Finch. 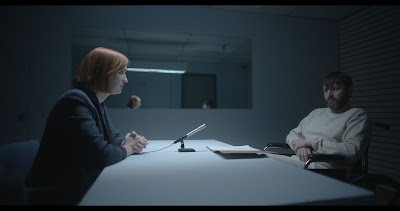 On his way home from a friend's wedding, Glen (Vincent Kartheiser) drives over some strategically-placed nails and finds himself making his way through the dark and the pouring rain to the house of Arthur (Bob Stephenson) and Arthur's wife Cyndi (Chelsea Lopez). Almost immediately things get weird as Arthur asks Glen to sleep with Cyndi, something Glen either does or at least believes that he does. Months later Arthur turns up at Glen's house and shows him video footage of a pregnant Cyndi. Now what's to be done about that? 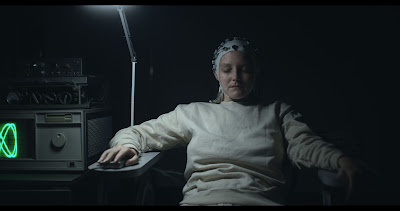 Meanwhile we are being introduced to a senatorial candidate who has his possibly pregnant lover holed up in a remote hideaway, and a research laboratory looking into the effects of sound on behaviour. Does it all tie together? It surely does and an early shot of breakfast things seemingly left out in the rain suggests that what Glen is experiencing at that early point in the story might not be what's actually happening. 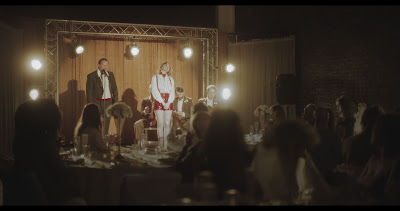 ULTRASOUND is the kind of film that's difficult to talk about too much without spoiling it. Rest assured that everything does pretty much fit together and, perhaps more importantly, the viewer is left to work out, and ruminate upon, all that has happened. It's thoughtful and ambitious and is perhaps more of a commentary on the times we live in than is first apparent. Here's the trailer:

Posted by John Llewellyn Probert at 9:23 am No comments: 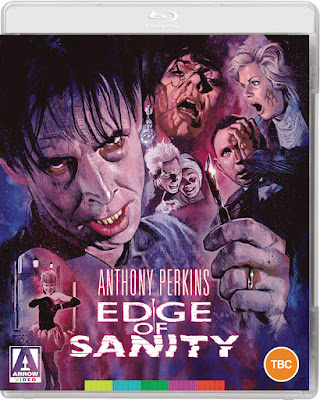 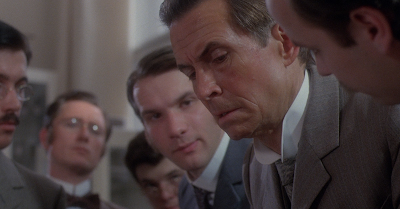 Dr Henry Jekyll (Anthony Perkins with a limp) is a physician who has developed a new kind of local anaesthetic. One night in the lab his test monkey accidently spills ether onto an open petri dish of it. A few sniffs later and Jekyll becomes Jack Hyde (Anthony Perkins without a limp but with white face makeup and looking like Cramps lead singer Lux Interior after one too many heavy nights). 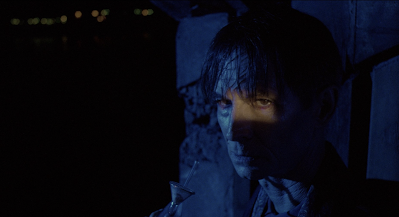 Jack Hyde wanders off into London and here's where the film starts to get interesting. Led down an alley by a girl wearing distinctly 1980s getup he finds himself in a Ken Russell-themed fetish club. Unable to satisfy his urges he ends up killing prostitutes. The police are baffled (but then it doesm't look as if it takes much). Jekyll's wife (Glynis Barber) finally works out what's going on but is it too late? 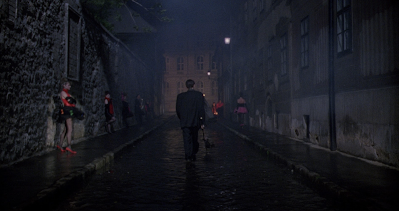 Much maligned on its original UK release in a severely truncated version, EDGE OF SANITY is a far more interesting, entertaining and accomplished picture than 1980s critics claimed and if you've steered clear of it for that reason (as I'll admit I had) than I urge you to give this one another go. Perkins is excellent in an performance of such over the top intensity one assumes he had so much fun doing that sort of thing for Ken Russell's CRIMES OF PASSION (1984) that he wanted to do the same thing all over again. 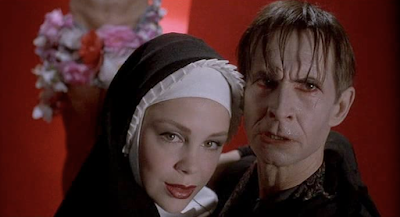 Production design and photography are equal highlights. Jekyll's lab looks (refreshingly) like no Victorian laboratory ever did - all white tile and bottles of blue fluid - and while Henry's days are lit blandly, Hyde's world is dayGlo Madonna video hell. As for the rest of the acting, Glynis Barber is fine in a pretty thankless role while David Lodge of COCKLESHELL HEROES (one for the Spike Milligan fans there) and numerous Robert Hartford-Davis projects turns in a brief role as Jekyll's lawyer. 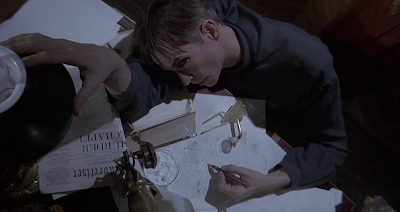 The special features on Arrow's disc also make this disc a must-have. First off is a commentary track by David Flint and Sean Hogan. Thankfully both are fans of the film so we get a wholly appreciative commentary that includes discussion of star Perkins, producer Harry Alan Towers, director Gerard Kikoïne and the filming locations. Any commentary that includes mention of both Jess Franco and Nabokov gets my attention and this is one that's essential listening for EuroHorror fans. 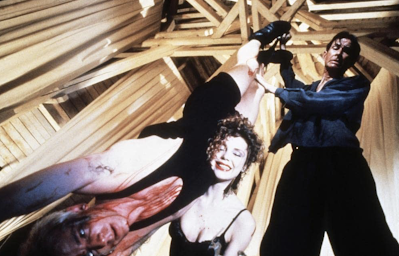 Stephen Thrower provides 26 minutes of appreciation and production history with his usual meticulous attention to detail as regards how the movie came to be. He also mentions Frederic Talgorn's music score which is indeed quite marvellous. Dr Clare Smith (author of Jack the Ripper in Film & Culture) provides an erudite talk about the film in relation to other presentations of Jack the Ripper in cinema. Edward's Edge is 12 minutes with producer Edward Simons who has some good stories to tell about how he placated Anthony Perkins at vital moments during the film's production. 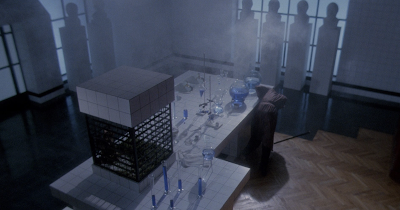 Finally, we get 45 minutes worth of interviews with director Gerard Kikoïne who has plenty of stories to tell about the French erotica genre in which he worked extensively, how he kept Oliver Reed under control (there's a book in all these Ollie stories that are surfacing on Blu-ray), and how he came to work on the film. M. Kikoïne comes across as an engaging, enthusiastic individual who seems to have enjoyed his offbeat career. An excellent package from Arrow and an essential purchase for EuroHorror fans.

Posted by John Llewellyn Probert at 8:08 am No comments: 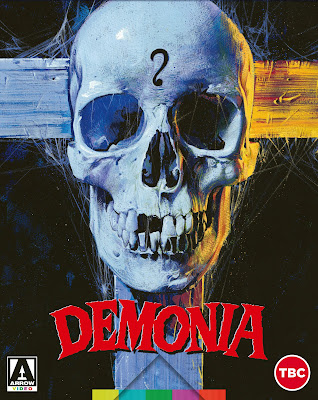 One of director Lucio Fulci's later films has been released in the UK on Blu-ray by Arrow in an extras-packed two disc set. The film itself is a bit of a half-arsed ghost nun saga but some of the extras on here will make it worth the purchase for Fulci fans. 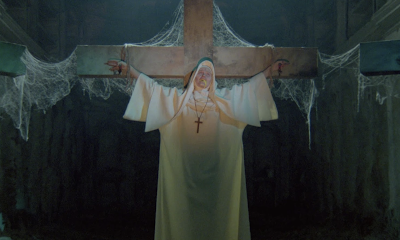 In fifteenth century Sicily, an angry mob drags five nuns to their deaths in the bowels of a monastery where the women are crucified and the chamber sealed up. Hundreds of years later, a very CITY OF THE LIVING DEAD seance causes Liza (Meg Register) to collapse the day before she's due to embark on an archaeology field trip to the very same are under the leadership of Professor Evans (Brett Halsey). 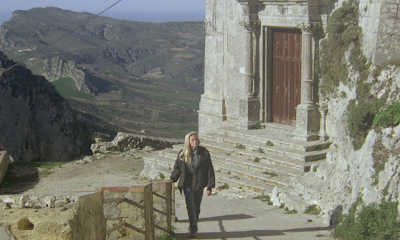 Once they arrive strange things start to happen. ZOMBIE FLESH EATERS star Al Cliver is killed by a speargun fired by a naked ghost lady who appears on his boat. Sadly nothing else in this film is quite as strange as this bit, as a somewhat garbled story unfolds in which, presumably, local descendants of the nun-killers are bumped off.

While it boasts a fantastic central location, some inspired shots, and a couple of dream sequences bordering on the Franco-esque, Lucio Fulci's DEMONIA nevertheless feels as if nobody's heart was really in this one. Like the archaeologists in this who never seem to get any work done, there's very much a sense that everyone's treading water. The murder are too few and far between, and too outrageous compared with the tone of the rest of the film, to be effective. 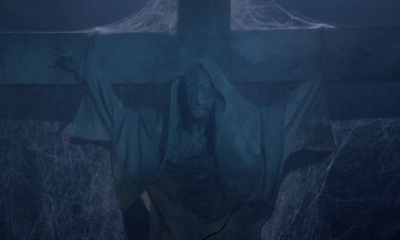 Arrow's Blu-ray comes with a Stephen Thrower commentary that, as you might expect from the man who wrote a book on Lucio Fulci that's so heavy you could probably perpetrate a Fulci-esque murder with it, tells you all you ever need to know about the film as well as the historical events that it's set against.

Holy Demons is 33 minutes with co-screenwriter and assistant director Antonio Tentori. Recorded over Zoom during Covid restrictions this is well-illustrated with clips and images as he talks about Fulci's career, DEMONIA's personnel and the film's shortcomings and the reasons behind them. In Of Skulls and Bones camera operator Sandor Grossi talks about the film's locations, the use of the fog filter, as well as Fulci's love of the zoom. Other bits and pieces include 10 minutes of on-set footage from a Fangoria video back in the day, and a four minute interview with Fulci conducted on the DEMONIA location. 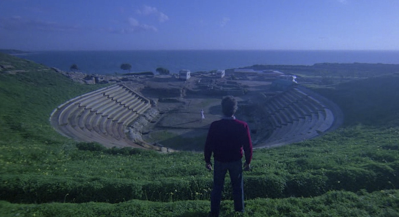 The second Blu-ray in the set is dedicated to Fulci Talks, an 84 minute interview with the man himself recorded in 1995. It's a fascinating insight into the man himself as he comments on his entire career, lists his favourite directors and his favourite parts from his own films. Add in some gorgeous packaging and this is a beautiful presentation set from Arrow that Fulci fans will want to check out. 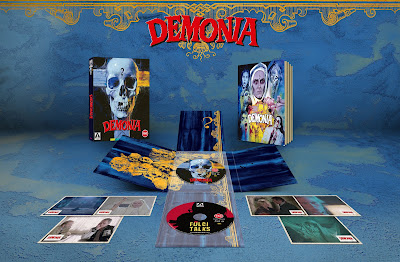 Posted by John Llewellyn Probert at 9:28 pm No comments: