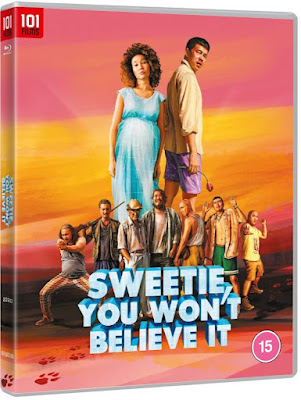 After its rollicking Frightfest premiere last year, where it was the favourite of quite a few who attended, Kazakhstan comedy horror SWEETIE YOU WON'T BELIEVE IT gets a Blu-ray and digital release from 101 Films. 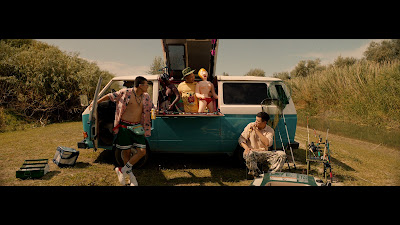 Dastan (Daniar Alshinov) wants to spend one last weekend of fun before the birth of his first child. So he and his two hapless idiot friends go on a fishing trip where they end up having to use defective inflatable sex dolls bundled together as a raft. On the way they inadvertently throw a bottleful of urine at some villains and, a short while later and after a trouser-losing incident, they witness the same villains execute a killing. Soon they're on the run, the body count is starting to rise, and who is that mysterious one-eyed man and what does he want? 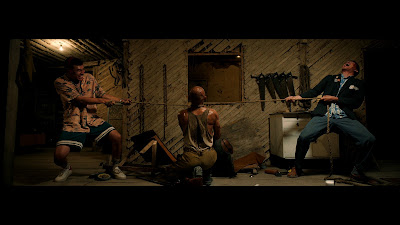 Billed as CARRY ON DELIVERANCE this is more like the comedy version of those ultra-bleak Australian or French films set in the back of beyond, with accompanying gruesome characters and situations to match, except they are played for (extremely effective) laughs - a bit like if THE LOVED ONES or a Pascal Laugier movie had been done as a comedy. 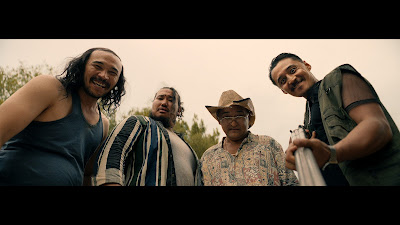 One lengthy suspenseful sequence works really well as both comedy and horror as you keep your fingers crossed a certain character doesn't break wind again. SWEETIE YOU WON'T BELIEVE IT is a real surprise - an unexpected delight that manages the difficult thing of creating scenes and situations that are as funny as they are horrific. Let's hope we get more of this sort of thing from the same team. 101's Blu-ray has the trailer you can watch below now, but no other extras.

Posted by John Llewellyn Probert at 9:15 am No comments: 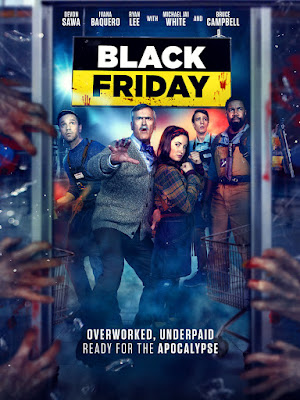 "Gore in the Store"

There's splatter, prosthetics and mayhem aplenty in BLACK FRIDAY, getting a digital release from Signature.

The staff of kids' superstore We Love Toys are getting ready for the annual Black Friday sale, not knowing that the night before, a blob of peculiar ooze has appeared and infected the night security man. 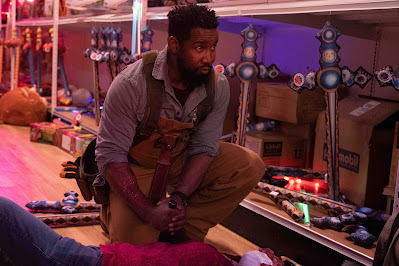 The doors open, the shoppers stampede in, and pretty soon everyone's turning into Robert Kurtzman-created monsters. Soon the few normal humans left find they have to resort to measures both extreme and extremely silly in an attempt to destroy the alien menace. 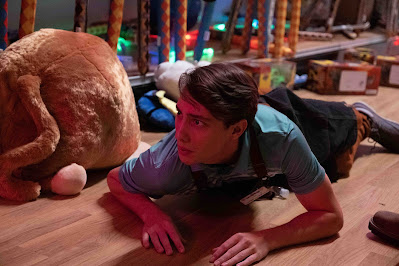 BLACK FRIDAY isn't a classic. There's nothing here that hasn't been done or seen before and for a film that purports to be a horror comedy the laugh factor could have done with being upped considerably, although recalled toy Dour Dennis the Depressed Teddy Bear is very funny - more of this sort of thing would have been most welcome. It's also lacking the frenetic sense of mounting jeopardy that better examples of this kind of subgenre (eg 2015's BLOODSUCKING BASTARDS / BLOODSUCKING BOSSES) achieve. 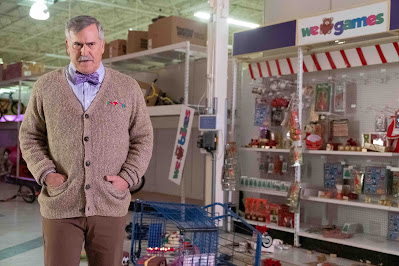 That said BLACK FRIDAY is a reasonable timewaster with a cast of genre favourites including, Devon Sawa (FINAL DESTINATION), Michael Jai White (BLACK DYNAMITE), Ivana Baquero (PAN'S LABYRINTH) and Bruce Campbell (so much stuff but I'll just put EVIL DEAD) plus Seth Green as the voice of Dour Dennis. It's the kind of movie that used to go down a storm at horror film festivals in the late 1980s, usually in the 1am slot when it was just the thing you needed so you didn't have to keep propping your eyelids open with cocktail sticks. Recommended for a bit of undemanding Friday night fun. 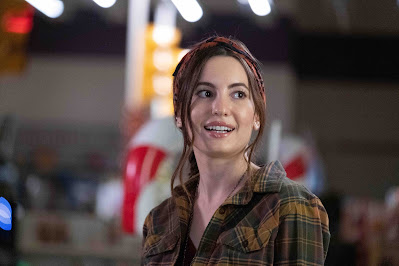 BLACK FRIDAY is out on digital from Signature on Friday 11 February 2022. Here's the trailer:

Posted by John Llewellyn Probert at 9:54 pm No comments: 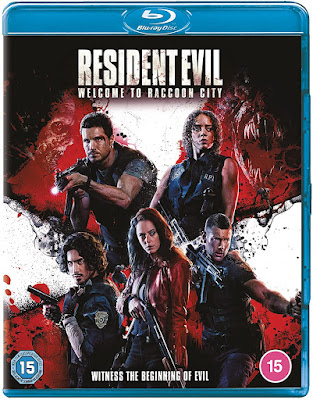 Of course it had to happen. When I reviewed RESIDENT EVIL 6: THE FINAL CHAPTER back in 2017 there was indeed very much a sense that this series, based on 'the highest-grossing video game franchise of all time', had come to a definite end. These days, however, old franchises aren't allowed to die gracefully. Instead they get rebooted, and if HALLOWEEN and SCREAM can do it, to name but two, then why not RESIDENT EVIL?

So for this seventh film we're back in 1998, and in case you miss that date caption there's lots of music and plenty of technological devices from the period shoehorned in so that teenaged future archaeologists can gasp at the sight of Palm Pilots and pagers actually being used by living people.

Racoon City, home of the Umbrella Corporation, is now slowly dying, with most company employees and townsfolk already gone. Then a mysterious leak at the local plant turns most of those left into flesh hungry zombies and it's up to the few non-zombified survivors to fight for their lives.

There are some familiar faces in RESIDENT EVIL: WELCOME TO RACOON CITY including Kaya Scodelario (best known to readers here for playing the lead in Alexandre Aja's alligators on the rampage picture CRAWL) and TV's Tom Hopper (Umbrella Academy and Black Sails). There's a familiar director behind the camera as well. Johannes Roberts is best known for mediocre child back from the grave movie THE OTHER SIDE OF THE DOOR, mediocre shark movies 47 METERS DOWN and its sequel, and mediocre home invasion picture THE STRANGERS: PREY AT NIGHT.

For someone with a bit of a track record with directing modern-day exploitation movies Mr Roberts still hasn't got the hang of how to make this kind of stuff worthwhile and entertaining viewing. Elements from the Resident Evil games are present and correct but it's all unforgivably at the expense of plot and pacing. A scene where a petrol tanker crashes is wasted and ends up being laughable, and there are numerous scenes where tweaks to the dialogue would have added immensely to the virtually non-existent characterisations. Sad to say, but RESIDENT EVIL: WELCOME TO RACOON CITY, is a bit of a comedown from the highly entertaining RESIDENT EVIL 6: THE FINAL CHAPTER.

Sony's Blu-ray contains three short featurettes that last just over ten minutes in total but that's it for extras.

RESIDENT EVIL: WELCOME TO RACOON CITY is out on Digital Rental, 4K UHD, Blu-ray , and DVD on Monday 7th February 2022. It's already out to download and keep.

Posted by John Llewellyn Probert at 8:02 am No comments: