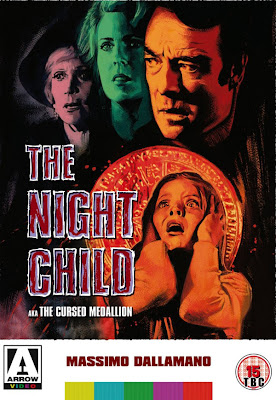 We’ve been having a bit of a Massimo Dallamano season here at Probert Towers. His WHAT HAVE YOU DONE TO SOLANGE is a classic, and his 1970 remake of DORIAN GRAY for Harry Alan Towers isn’t half bad, either. SUPER BITCH is as daft a EuroCrimes thriller as you could hope for and while I’ve yet to get round to VENUS IN FURS, he’s further solidified his reputation as a film-maker of note for me with THE NIGHT CHILD. Misleadingly advertised as an Italian EXORCIST / OMEN rip off, THE CURSED MEDALLION (as it was otherwise known) comes across more like a weird Italian version of DON”T LOOK NOW that doesn’t quite make sense, but then it isn’t supposed to.

Richard Johnson, who apparently loved making films in Italy, at least until he worked for Lucio Fulci, plays Michael Williams, a fine art documentary film maker who works for the BBC. He sets off for the Italian town of Spoleto where apparently an unusual painting of the devil and a little girl has been uncovered. His daughter Emily (Nicoletta Elmi, the go-to child for every Italian horror of the time period) goes with him. Mum isn’t around as she perished mysteriously in a fire, but Emily’s nanny accompanies them. Williams gives his daughter a medallion and after that the child starts to act strangely as deaths begin to occur around her that may or may not be influenced by the painting. 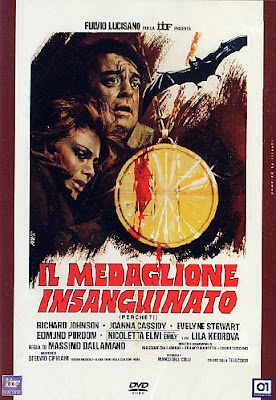 THE NIGHT CHILD is a real curio from Italian film land. Beautifully shot, well acted, and with a few scenes that are deliciously, atmospherically scary, it’s well worth catching up with if you like your horror languid and slow-building. There’s not a lot of action, and not a lot of murders either, but the film slowly develops such an atmosphere of oddness that by the time you get to the end you’re not questioning the strange things that have happened. Indeed, like quite a bit of Italian horror THE NIGHT CHILD doesn’t make a lot of sense or offer any explanations, but the difference here is that it does all these things in the right way, such that you feel the ambiguities and weirdness are all intentional. As well as some gorgeous cinematography and good performances, Stelvio Cipriani’s score is very good as well. The booklet that comes with Arrow’s DVD suggests it’s a film that lies between Mario Bava’s LISA AND THE DEVIL and the weird nightmare landscape of Fulci’s THE BEYOND (although without the ultra-violence) and I would go along with that. A neglected piece of quality EuroHorror cinema that’s definitely worth a look.
Posted by John Llewellyn Probert at 6:35 pm No comments: Proof, as if it were ever needed on this site, that a film doesn’t have to make a whole lot of sense to be a whole lot of fun, here’s a 1973 EuroCrimes exploitation flick that originally went under the title "Si può essere più bastardi dell'ispettore Cliff?" I can’t find a decent translation of that online anywhere but it has the words ‘Bastard’ and ‘Inspector Cliff’ in there somewhere that suggests it might be a DIRTY HARRY ripoff but with Inspector ‘Bastard’ Cliff instead. Certainly the film takes pains to call the title character (played very much in Clint mode by Ivan Rassimov) a bastard as often as possible so that might have been the intention. Other titles for this Massimo Dallamano directed little crime opus include BLUE MOVIE BLACKMAIL (which makes sense), MAFIA JUNCTION (which kind of makes sense) and the title it goes under on its DVD release from Arrow Films, SUPER BITCH, which makes no sense at all until you realise it’s the film’s re-release title from when it was shovelled out onto VHS for the delectation of Stephanie Beacham fans everywhere after she’d just made it big in TV spin-off series DYNASTY: THE COLBYS. The series also starred Charlton Heston, but a slew of obscure Heston re-releases did not occur at the same time, partly because of rights issues but mainly because Mr Heston did not end up nude in any of them. Whatever its title, the plot of SUPER BITCH (let’s call it that shall we as it’s quicker to type) does take a fair old bit of following. Patricia Hayes, player of a million Cockney tea ladies, cleaning ladies, and bag ladies in British sitcoms not worth revisiting unless you have some kind of masochistic taste streak, is cast here as a Turkish drug Lord who is trying to get a consignment of drugs shifted from Beirut to New York. A London-based escort agency is trying to do the same thing. In the middle of all of this is Cliff (Ivan Rassimov) an undercover policeman and complete bastard who isn’t above arranging for villains to be machine-gunned to death in out of the way English farms if they’re in his way. Cliff’s having it off with the escort agency’s star attraction Joanne (Stephanie Beacham) who is also involved in the drug trafficking.
I’ll leave it there for plot because most of this film is taken up with double and triple crossing, extremely violent murders that outdo movies like THE SWEENEY, and Stephanie Beacham naked, when she’s not wearing a sexy skimpy bunny costume with rabbit ears. Yes a bunny costume. With rabbit ears. For anyone interested (and I bet there are quite a few out there) this occurs very early on in the proceedings presumably to helpfully suggest that if you’re taking any of this film seriously you really should stop now. If that’s not enough Miss Beacham’s hair changes length and style from virtually scene to scene, suggesting that this film was made in at least two and possibly three different time periods but seeing as no-one making this seems to be bothered about that, then neither should you. Finally there’s the cast. Look out for Camille Keaton, Michael Sheard getting his head blown off graphically in a park, Gareth Thomas getting pushed by Bastard Cliff, and Cec Linder (the original Dr Roney from the BBC’s QUATERMASS AND THE PIT) in another bunny costume. For fans of Euro daftness SUPER BITCH is worth every penny of what Arrow Video is currently asking for it, and to top it all you get a Graham Humphreys cover as well. Marvellous.
Posted by John Llewellyn Probert at 8:58 am No comments: