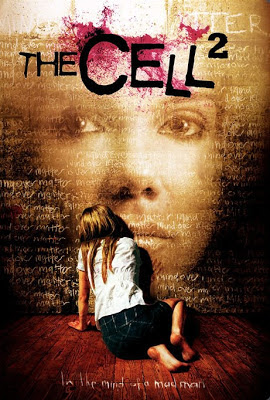 The Cell 2 is one of those 'pseudosequels' so staggeringly unrelated to its original that the only reason it bears the title is to part you from your hard-earned cash, merely to leave you with that vague and slightly depressing sense of despondency that you will never learn.
When is an eighty nine minute film not an eighty nine minute film? When it lasts for seventy eight minutes and then pads out the remaining eleven by means of an endless credit crawl interspersed with shots of mountains, a behind the scenes shot of a car stunt that wasn’t very interesting to begin with, and a decidedly minor helicopter stunt where the gentleman concerned half-heartedly high-fives a random member of the crew afterwards once he remembers that he’s being filmed.
The Cell 2 is a travesty of a movie in every sense of the word, but just in case you can’t quite grasp how terrible the implication of my use of that description is, here are a few well chosen words to illustrate just what I mean.
There’s a killer on the loose who kidnaps young girls, then flatlines them and then brings them back to life. Repeatedly. Quite exactly why we are never told, but that’s okay – the only reason I know that’s his modus operandi is because I read it on the back of the box – the film never makes it very clear. Neither is it explained why he has been given the nickname ‘The Cusp’. Perhaps he was a dentist in a past life. He certainly wasn’t a doctor, because despite the film taking pains to make out he has medical training he can’t take a pulse properly and when he defibrillates his victims he puts the paddles in the wrong place.
On his trail is a hunky testicle-squeezing alpha male sheriff whose niece is the latest kidnap victim, and ‘Beautiful psychic investigator’ (it says on the box) Maya Catenada. Maya was a previous victim who escaped but whose ordeal left her with psychic powers. It also must have made her so painfully shy that she went and hid under a sunlamp for six months when she wasn’t at the ‘Excess Blush ‘N’ Gloss’ beauticians. Maya’s not very good at saving victims. In fact at the start of the film most of them seemed to have died before the police could intervene, so quite why they let her carry on ‘helping’ them I have no idea.
The original ‘The Cell’ starred Jennifer Lopez as a psychologist who spent most of the time in the dream world of a serial killer. In The Cell 2 the rich dream reality created by Tarsem Singh is replaced by a narrow corridor of the electrical department of the local John Lewis, with our acting-challenged heroine picking up different sized television screens to try and work out what’s going on. And while we’re on the subject of electrical goods, our killer has somehow managed to equip an entire hideout with electrical generators and cardiac bypass gear the size of a fridge freezer which he must have somehow obtained, transported to his hideout, and installed without anyone noticing. In the cheap and cheerful exploitation movies of the seventies this wouldn’t have been a problem because one just did not need to explain such things, but like so many movies today The Cell 2 tries to be so earnest about its intentions to be a thriller that it just can’t get away with such contrivances. Mind you that’s not the worst. At one point a black clad bouffante-haired medallion wearing FBI agent gets murdered with the most obviously fake rubber axe since Christopher Lee did in Anoushka Hempel with a fake rubber knife in Hammer’s Scars of Dracula. That, coupled with the seriously short running time means that while it’s over quickly, it’s never quickly enough. Don’t just avoid this, run away from it. And if it comes after you hit it. With a real axe.
Posted by John Llewellyn Probert at 9:15 am No comments:

Email ThisBlogThis!Share to TwitterShare to FacebookShare to Pinterest
Labels: 2000s, Films You Should Never See, Trapped in the Room With It 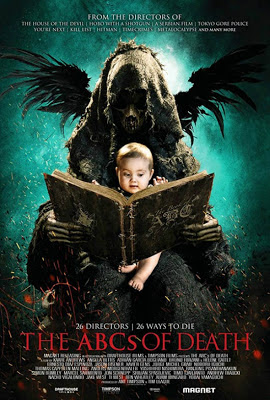 Shocking, controversial, hilarious, touching, horrible, stylish, clever -   there are probably as many complimentary adjectives to describe ambitious anthology movie THE ABCS OF DEATH as there are segments to it. What can be said about the movie as a whole is that, unbelievably, it works, both as a compendium picture, and as a fascinating snapshot of the current state of contemporary horror cinema. Parts of it may be too much for some people, parts of it may be too silly, parts of it may be too obscene, and in quite a few segments there is a worrying obsession with the toilet that works better in some stories than others, but overall the movie is well worth sticking with to the end.
ABCs OF DEATH consists of 26 short films, by 26 different directors,  crammed into a running time of just over two hours. The remit by the producers was simple: each director was allocated a letter of the alphabet and asked to make a short film related to that letter with a budget of not more than £5000. Taking this into account, ABCS OF DEATH could quite easily have been an uneven disaster of staggering proportions. That it has turned out to be the exact opposite is as delightful as it is surprising, with the standard of the shorts being very high indeed. Indeed, only a couple of segments fail to move you in some way, which is no small achievement. Each episode begins and ends with the colour red, with the ending also telling you the title of the short and the director responsible, so you get to learn straight away whose work you’ve just been watching. There is neither the space nor the time here to go into all the individual stories in detail, and I’m not going to reveal any of the titles because finding out what each letter stands for in the context of each story is part of the fun, but special mentions must go to to Jake West, Simon Rumley, Xavier Gens, Ben Wheatley, Adam Wingard, Ti West, Nacho Vigalondo, Marcel Sarmiento and Banjong Pisanthanakun, all of whom produced entries I absolutely loved. Lee Hardcastle’s claymation piece is probably the best use of the worryingly recurring toilet and toilet habits theme and manages to be both hilarious and terrifying while also being the only successful horror film I’m aware of to finish with a close up of a potty. A SERBIAN FILM’s Srdjan Spasojevic supplies my absolute favourite segment of the lot, and his is the one I’m most looking forward to seeing again when I give this movie another look. There are also a number of contributions from Japanese film-makers, quite a few of whom seem to be obsessed with young ladies breaking wind or young men engaged in other habits that might be described as rather less than tasteful, all to a point of excess that exceeds ludicrousness, and the final segment of the film, once seen, is not easily forgotten.

I was genuinely and pleasantly surprised by ABCS OF DEATH. I expected the film to have a couple of highlights at best, but it turned out to be quite a tour de force by a collective of exciting film-makers, almost all of whose visions were never less than interesting. I can highly recommend it, and I'm going to keep my fingers crossed that if the promised MORE ABCS OF DEATH materialises, it will keep up the very high standard set by the original.
Posted by John Llewellyn Probert at 10:00 pm 2 comments: