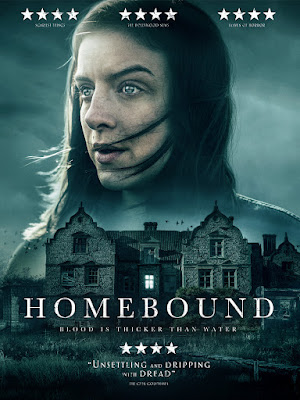 Following its UK premiere at Glasgow Frightfest, Sebastian Godwin's rather decent 'mad family living in an old country house' picture is getting a cinema and digital release from Blue Finch. 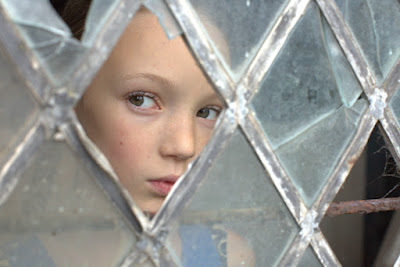 Recently married Holly (Aisling Loftus) is taken by new husband Richard (Tom Goodman-Hill) to the isolated rambling old family home to meet his three children and his ex-wife, who hasn't been answering her phone and isn't there when they arrive. The three children are present, though, and rather strange they are too. There's no food in the house but the kids think nothing of helping their father catch and kill a goose. Holly quickly begins to realise that she may have ended up in the middle of a very worrying situation indeed, and she still hasn't checked out the cellar. 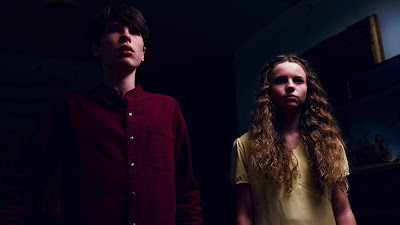 Clocking in at a scant 71 minutes, HOMEBOUND is nevertheless something of a delight, mixing elements of Ian McEwan (The Cement Garden) and the better episodes of old UK horror TV shows like Hammer House of Horror and Thriller, as well as the nastier European horror comics of the 1970s, the kind where an innocent girl would end up at the hands of lunatics in an isolated country location. 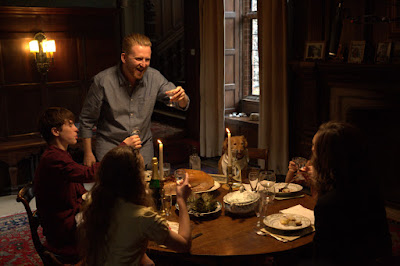 Well directed (and sad to say that's actually quite the rarity amongst the modern British horror cinema currently cluttering up supermarket shelves), with decent acting and an unnerving score, HOMEBOUND is a very respectable first feature effort indeed. Highly recommended for fans of Great British Horror. Here's the trailer:

Posted by John Llewellyn Probert at 9:41 am No comments: 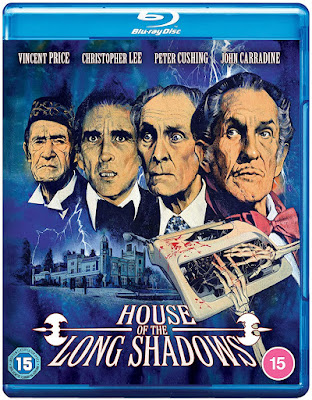 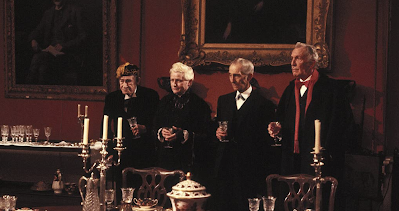 Getting all those elements together might have seemed a bit daunting for even the most capable of producers. Menahem Golan and Yoram Globus of the Cannon Group didn't exactly have a track record for producing quality cinema at the time, but they were very good at the one thing producers need to be - separating investors from their money. Unfortunately on the whole the films they produced made vast losses due to Cannon's uncanny ability to give the public pretty much what it didn’t really want on a regular basis - at least until all those investors realised what was going on. 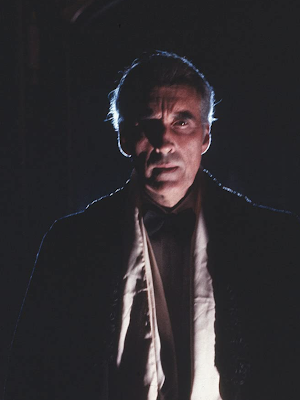 And that’s one of the problems with HOUSE OF THE LONG SHADOWS. It’s an old dark house thriller. Unfortunately this kind of picture went out of fashion in the early 1940s and never came back. Sadly Walker’s proposed project to Cannon about a murderous aborted foetus back from the dead and looking for revenge was rejected by Golan in favour of a ‘proper horror film’. Writing these words I’m even sadder now than when I learned of the project that DELIVER US FROM EVIL (what a great title)  that was also due to be written by Armstrong never reached the screen. Instead we have HOUSE OF THE LONG SHADOWS, written very quickly by Armstrong apparently in two weeks and unfortunately it does show, sadly taking ages to get going. 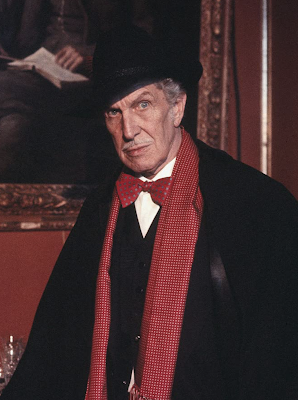 Once it does, and the old horror stars are reassembled, each after having their own superb visual introduction, the film is a delight. In the last half an hour or so there are some well-orchestrated nasty murders and you can tell that this is where Walker’s heart is. Sadly the opening half, documenting writer Arnaz’s bet with publisher Richard Todd (presumably driving Walker’s trademark Rolls Royce at the beginning) that he can write a great gothic novel in the tradition of Wuthering Heights isn’t just slow but rambling and uninspired as well. Only Norman Rossington as a deliciously melodramatic Welsh railway station master is worth watching or listening to, and Arnaz and Julie Peasgood as the young leads just don’t have the charisma of the stars of 1930s vehicles such as Barbara Stanwyck or Dick Powell. 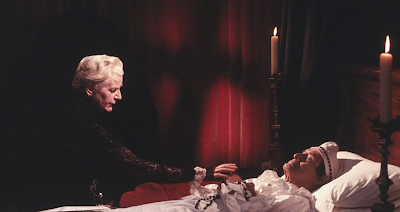 One can’t be too hard on HOUSE OF THE LONG SHADOWS, though, as it’s a film that by rights shouldn’t even have existed in the Jason Voorhees / Michael Myers dominated horror cinema of the early 1980s. The leads are an absolute joy, with Vincent Price getting to do what he was always best at (and getting to call Christopher Lee a bitch which must be a cinematic once and only), Mr Lee doing his very best arrogant and slightly miffed fish out of water bit, Cushing playing around with one of his ‘weak character’ roles - a bit like CREEPING FLESH’s Emmanuel Hildern but without the brains or reckless abandon, and John Carradine doing a nice job of being the slightly incensed elderly master of the house. Sheila Keith is just wonderful as well and her performance here only makes it all the more regrettable that this was to be her last appearance in a horror subject until the Amicus spoof episode of Steve Coogan’s Dr Terrible’s House of Horrible (And Now The Fearing). The bit players aren’t bad either, with Benny Hill regular Louise English as the pretty girl who gets her face burned off by acid and Richard Hunter in the typical Walker male role of henpecked weakling of husband. 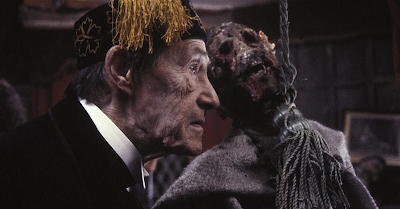 Even Richard Hartley does a creditable job trying to sound like Walker’s regular composer Stanley Myers doing haunted house music, and the location itself is nicely spooky. Apparently the house belonged to a friend of FLESH & BLOOD SHOW screenwriter Alfred Shaughnessy. 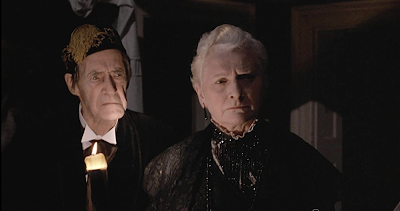 Fabulous Films' print looks about the same as the Final Cut version from a few years ago (although obviously Blu-ray does help it to make the image look a bit cleaner). Extras include Derek Pykett's feature-length documentary House of the Long Shadows - Revisited, which here is a little bit longer that the previous release. The commentary track with Pykett and Pete Walker has been ported over, and you also get a brand new featurette - Pete Walker's House of Horror which is a new interview with the director that lasts about fifteen minutes. Let's have a trailer, shall we?

Posted by John Llewellyn Probert at 9:45 am No comments: 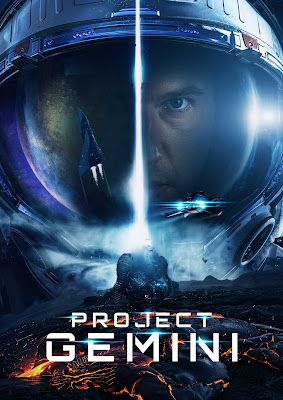 Oh yes, we're in dodgy SF movie territory indeed with PROJECT GEMINI, a Russian-Cypriot co-production that's strong on CGI effects but lacking in pretty much everything else.

The film kicks off with a somewhat flatly delivered info dump revealing a plague is killing the earth's vegetation and the planet has reached crisis point. The only way humankind can survive is to travel to a distant solar system and terraform a new planet using some kind of life-generating sphere archaeologists have found two of in a cave somewhere and which are thought to be responsible for life starting on earth. Or something.

Off our intrepid crew of seven men and one woman shoot into space. They pass through a rift (or something) and end up in the wrong place. The captain accuses his navigator of putting in the wrong coordinates and asks him to 'go and check the engine', which the navigator does before killing himself, presumably from embarrassment at either his mistake or more likely from being in this film. Meanwhile the Mysterious Ancient Sphere they have brought with them has been leaking some weird goo that promises to turn into a gloopy alien but actually doesn't.

And that's only the start of what's wrong with PROJECT GEMINI, a film that boasts breathtaking CGI but that's about it for the positives. Acting is leaden and not helped at all by ponderous dubbing. Characterisation is non-existent to the point that each person in this could be a chicken with a dubbed on voice and it couldn't possibly be any worse. The plot is perfunctory and the dialogue sounds like what you'd get from five year olds playing spacemen during the school lunch hour. In fact so poor is it all that it had me hankering for the good old days of the 1960s when an enterprising US distributor could have bought this, chopped out everything but the effects and filmed some new material to slot in around it. Wondering what that could have been is about the most entertainment to be had from PROJECT GEMINI.

Posted by John Llewellyn Probert at 8:27 am No comments:

Email ThisBlogThis!Share to TwitterShare to FacebookShare to Pinterest
Labels: 2020s, Trapped in the Room With It 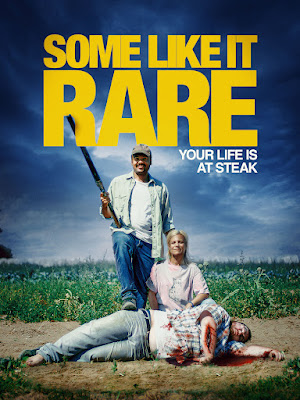 "Everything Tastes Better With Vegans"

Sophie (Marina Fois) and Vincent (co-writer and director Eboué) run a small butcher's shop. Business isn't good and their marriage is in a state of collapse. In fact the last thing they need is a raid by vegan activists, especially when Vincent accidentally kills one of them. The disposal of the body results in a new taste sensation they dub 'Iranian pork' and which quickly becomes the talk of the town. But when the stock runs out they are faced with a new problem: should they refill and where are they going to get the vegans from?

Visitors to this site may well be familiar with Paul Bartel's 1982 EATING RAOUL, a rather wonderful little black comedy in which Bartel and Mary Woronov play a married couple who want to open a restaurant and fund it by advertising kinky sex services and then killing their customers. Well SOME LIKE IT RARE is basically the same idea but with vegans instead of swingers. It also happens to be almost as funny, with our couple going to increasingly bizarre lengths to obtain their special meat.

Blood-splattered, guaranteed to offend certain groups, and often very funny, SOME LIKE IT RARE gets maximum Michelin stars (or their horror equivalent) and is likely to be one of the top horror comedies of the year. Here's the trailer:

Posted by John Llewellyn Probert at 8:38 am No comments: 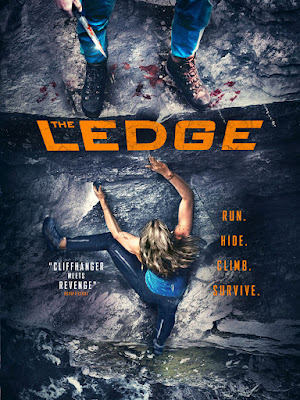 Following its UK premiere at this year's Glasgow Frightfest, Signature are releasing Howard J Ford's THE LEDGE on Digital and DVD.

We're in Italy in the Dolomite mountains. Two American girls are on holiday with the intention of doing some serious climbing. Four American men just happen to arrive and move into the chalet next to them. There only appear to be two chalets, or if there are more we certainly don't see any evidence of any other tourists.

That night the girls are invited to a fireside party and things go horribly wrong, with one of them being brutally murdered and the other capturing it all on tape. But she's spotted and the chase is on, the difference here being that the chase is up a cliff.

And that's the raison d'être behind THE LEDGE, a film that shines during these beautifully-shot, frequently tense sequences. Unfortunately the rest of the film doesn't live up to these highlights. Characterisation is minimal, dialogue is frequently clunky (and at points laughable) and the acting can't save it because it's pretty much of the same calibre as the writing.

It's a shame because if you can get through the rather awkward and contrived first act, once the chase is on THE LEDGE has some really decent suspense sequences, and the film only slows down when we have to go back to characters talking. But if you can put up with that and fancy a bit of tension and some amazing landscape photography then THE LEDGE isn't such a bad way of spending 80 minutes. Here's the trailer:

Posted by John Llewellyn Probert at 8:44 am No comments: