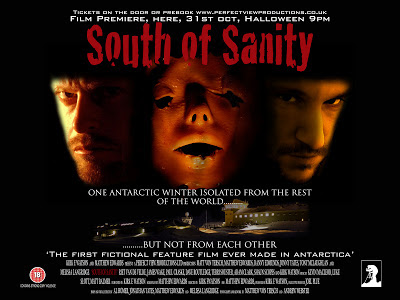 There has been a welter of micro-budget horror pictures released straight to DVD over the last couple of years. Shot on video and often featuring a lack of acting, editing and directorial skills that could easily outdo Jess Franco at his absolute worst, almost all of these can be dismissed as being the work of over-enthusiastic but woefully undertalented and inexperienced amateurs. I’m not going to name and shame here as that’s not the purpose of this site. Only very occasionally does one of these films turn out to be worth watching. The last I remember was TEARS OF KALI (also reviewed on this site) but another that’s well worth a look if you’re the kind of forgiving horror fan I am is SOUTH OF SANITY.
At Routledge research station in Antarctica, someone is murdering their way through the fourteen members of the research team isolated there. The killer wears black leather gloves (hooray!) a scary rubber mask, and is careful to ensure each victim dies in a different, horrible and creative way, just like in the best slasher movies. Who is the killer? Is it one of the team? Has someone broken into the camp? Is it a vengeful spirit?
I’m not going to say any more than that because that’s really all you need to know.  Despite it’s British pedigree, SOUTH OF SANITY actually was filmed entirely in Antarctica, by a research team based there who needed something to fill their spare time. The fact that it turned out so well is a testament to the creativity and skill of those involved. The acting ranges from acceptable to the need to be quite forgiving, but once the movie gets going horror fans who have had to endure far worse will appreciate that at the heart of this is a very decent little horror picture. The genuinely isolated locations add immensely to the atmosphere, and all directors Kirk F Watson and Matthew Edwards really need to do to create a sense of claustrophobia indoors is just point the camera. Where their skills come to the fore is in the setup and editing of the murders, which all come across as being filmed by people who know how to do horror and do it well.
SOUTH OF SANITY reminds me in spirit of the best of Roger Corman or William Castle - it has a fine gimmick to draw you in with its Antarctic setting, and once you’ve paid your ticket you stay to the end because it actually turns out to be a lot of scary fun. There’s a suitably bonkers explanation for what’s been happening, as well as an ending that’s appropriately bleak. Corman always said he made LITTLE SHOPPE OF HORRORS because he intended to play tennis but it was raining. SOUTH OF SANITY got made presumably because it was more fun than another game of Scrabble. Well done for picking up the camera, chaps.
Posted by John Llewellyn Probert at 1:08 pm No comments: 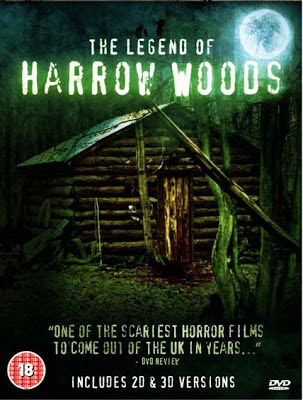 A colleague of mine who shall remain nameless to avoid besmirching his taste in film recently lent me a movie called THE LEGEND OF HARROW WOODS, following a discussion I had in Manchester with one of the film’s stars, Robin Askwith, which piqued my interest. Mr Askwith, a veteran of numerous low budget British curiosities including HORROR HOSPITAL, TOWER OF EVIL and LET'S GET LAID now appears in more upmarket television fare such as Eastenders and Benidorm. His memories of the movie did not include the title, which is not surprising as even from the extras on the DVD it’s apparent that, since being made at some uncertain time last decade, the film has undergone numerous title changes including ALONE IN THE DARK, EVIL CALLS, THE DEVIL'S DISCIPLE and THE RAVEN PART 2. It’s “directed” by Richard Driscoll, a name I shall now never forget, and stars Mr Askwith along with Rik Mayall, Jason Donovan and Norman Wisdom. I cannot possibly comment but a quick trawl of the internet has raised the suggestion that the reason for the numerous title changes is that these and other cast members have yet to be fully (or even partly) financially reimbursed for their efforts. Christopher Walken’s name is on the credits too. He doesn’t actually appear in the film, but his voice does, quoting "The Raven" endlessly and with a voice distortion filter so extreme it’s difficult to tell if it’s actually him, or indeed if it’s actually Poe’s poem. Again, I understand from internet sources that Mr Walken wished to have his name removed from the project and perhaps it was from one of the other versions but it seems to be in place here.
You will notice that so far I have not mentioned the plot. This is for two reasons. One is that I’m still not really sure what the film was about, and the other is that even trying to remember this film is giving me a horrid case of indigestion. The film starts with a group of jerkily-filmed actors travelling off to Harrow Woods where a witch called Lenore was burned several hundred years ago. People wander around for a bit and every now and then there’s a weird optical effect of an eye with a raven in the middle of it that’s probably there to justify the 3D. Yes 3D. I’m not going to say any more about that. There are a lot of sepia flashbacks to what looks like a hugely inferior ripoff of THE SHINING. Norman Wisdom appears as a toilet attendant, then Rik Mayall appears as the same character and says all the same dialogue all over again. There’s a weird orgy bit close to the end that may be ripping off EYES WIDE SHUT but by then my brain was starting to consider how to get out of my skull and away from all of this so again I can’t be sure. All I can be sure of is this is 78 minutes that no-one should ever have to be subjected to. It’s awful. Properly awful. The camerawork veers between static and so shaky I assumed it was all being done on a camcorder, so when I saw on the extras that Mr Driscoll actually had a full crew working on this I wondered how on earth it was possible to make something look so bad. Even Herschell Gordon Lewis and David Friedman did a better job on their 1963 movie BLOOD FEAST and there was only the two of them working the camera and the sound. The sound in Harrow Woods was probably recorded beneath ten mattresses, put through a distortion filter, run through a mixing desk left in the hands of a bored five year old and then played very quietly while a much louder music track was added on top.
Is Mr Driscoll the British Jess Franco? Absolutely not. Mr Franco has a few fans who can find something of interest in his work, and he has been known to make a  reasonably competent film on a very good day. Until I did some research for this column I had quite forgotten the hostility of the crowd reaction at a film festival to Mr Driscoll’s first film, THE COMIC, back in the 1990s. I understand he has made other films in the meantime and, unlike either the works of Jess Franco and Ed Wood, I have absolutely no intention of watching any of them.
Posted by John Llewellyn Probert at 9:33 am 1 comment:

Email ThisBlogThis!Share to TwitterShare to FacebookShare to Pinterest
Labels: 2010s, Films You Should Never See, Trapped in the Room With It
Newer Posts Older Posts Home
Subscribe to: Posts (Atom)