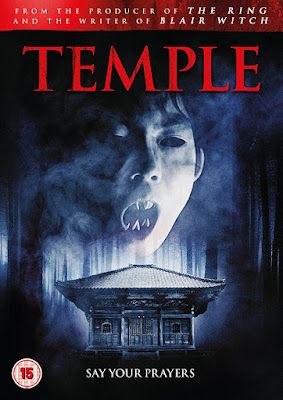 And I don’t mean one of the good ones. The latest movie from writer Simon Barrett (THE GUEST, BLAIR WITCH, some of the worst bits of the VHS movies) gets a UK DVD release from Thunderbird. 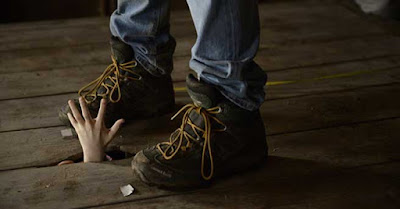 Kate (Natalia Warner) is writing her thesis on ancient Japanese temples even though she looks as if she’s constantly auditioning to host MTV (is that even a thing any more?). She speaks no Japanese and has one of those fixed smiles with too many teeth that very quickly start to look creepy in a risus sardonicus tetanus kind of way. She comes to Japan to meet up with her boyfriend James (Brandon Skienar) who boasts hipster hair, torn jeans that are too tight, and absolutely no ability at speaking Japanese either. That’s why Kate has brought along life long platonic heterosexual male friend (pardon?) Christopher (Logan Huffman) to do all the work while she and James wrap themselves around each other in front of him.

They discover a handwritten manuscript in a shop. It depicts a temple. The store owner tells them the temple is evil. Kate thinks it would be the ideal place to use as the starting point for her thesis. Let’s hope her work isn’t funded with public money because this really isn’t the best use of it. The shopkeeper refuses to sell them the book. Christopher comes back later. The shopkeeper has gone to be replaced by creepy ghostly GRUDGE boy who lets Christopher have the book. Christopher suspects nothing. The audience is already way ahead of everybody (including the film-makers).
They travel to the remote village where the temple is. Villagers behave like extras in a Hammer film, ie their acting is stratospherically better than either Kate or James (Christopher’s not too bad). They stay at the inn where considerate Kate has sex with James in front of platonic lifelong best friend Christopher. 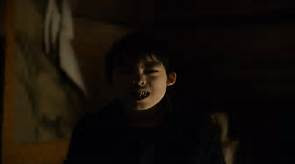 Next day GRUDGE boy appears and leads them to the temple. There’s a creepy statue outside it. Will they end up staying till after dark for no good reason? Will GRUDGE boy turn out to be GRUDGE boy? Will there be some running around handheld camera antics before the inevitable ‘is that it?’ conclusion that these 75 minute movies seem to mistakenly think is okay for a modern audience to spend its hard earned cash on?
TEMPLE is especially disappointing because there are the bare bones of a good scary story here that deserve better scripting. The setting is great and the bit parts are effective and well acted, but this is another of those films where 80% of the running time details cardboard cut out characters doing boring things and mouthing sub soap opera dialogue, all of which could be dealt with in the opening five minutes to allow more of the film to be devoted to the meat of the scary stuff that the film-makers obviously don’t know how to handle or develop.
Thunderbird’s disc has no extras to speak of. Not one of this year's best.

TEMPLE is out on DVD from Thunderbird Releasing on 4th September 2017
Posted by John Llewellyn Probert at 9:31 am

Email ThisBlogThis!Share to TwitterShare to FacebookShare to Pinterest
Labels: 2010s, Trapped in the Room With It