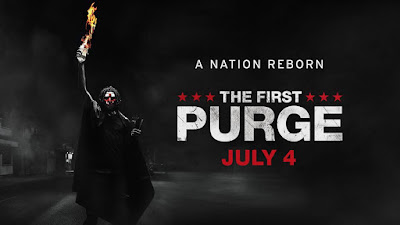 So there I was bemoaning the lack of political subtext in modern popular horror while simultaneously mourning the seemingly lost art of exploitation showmanship when what should come along but this, the fourth in James DeMonaco's series of films that started with THE PURGE back in 2013.

The previous movie, THE PURGE: ELECTION YEAR (2016) offered, along with the expected catalogue of brutal slayings and biting satire, some elements of hope and optimism at its finale. Where else for its writer to go, then, (Gerard McMurray replaces Mr DeMonaco as director this time around) than back to the beginning to show us how the annual twelve hour period of legal murder in an America of the future came to be?

During a period of political and economic strife not dissimilar to that occurring currently, both Republican and Democrat parties are beaten in elections by the New Founding Fathers who propose a radical experiment to provide people with an outlet for their rage, whilst also facilitating the widespread killing of large numbers of poor people the financially strapped government is far too in debt to support.

Slightly mad behavioural scientist Marisa Tomei (exuding the brittle sexiness of a Bond villainess with her bleach-blonde hair and jet black trouser suit) comes up with the idea of using New York's Staten Island as a test site, offering anyone who wishes to 'participate' $5000 for their trouble. If they survive the night, of course. The fact that the area is mainly home to low income ethnic minority families is, of course, the whole point.

Whereas THE PURGE: ELECTION YEAR bounced along with a kind of BRONX WARRIORS Enzo G Castellari-like sense of exploitation fun, THE FIRST PURGE feels like a more serious beast altogether. But then, we are living in different, and far more worrying, times than even two years ago. That's not to say THE FIRST PURGE isn't entertaining - the tower block climax feels like a cross between Gareth Evans' 2011 THE RAID and the bit at the start of George A Romero's DAWN OF THE DEAD where the SWAT team start killing everyone in the tenement building.

Gerard McMurray's style is more downbeat and action-orientated than James DeMonaco's and some of the scenes of empty streets just before the purge is due to start evoke a pleasing John Carpenter vibe (and composer Kevin Lax gives us some nice synth lines to go along with it). 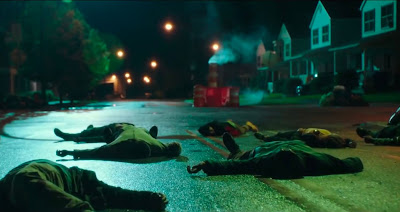 How does THE FIRST PURGE compare with the others in the series? Well, the first three films felt more like a bit of nonsensical speculative, satirical fun. THE FIRST PURGE feels more political, and far more no-nonsense, in its attempt to get its message across. Is that because of the film itself or the times we're living in? Oh, and releasing it on the fourth of July is a masterstroke. Well done Universal.

THE FIRST PURGE is out in cinemas (in both the UK & the USA in case you were wondering) from today, Wednesday 4th July 2018
Posted by John Llewellyn Probert at 10:30 pm