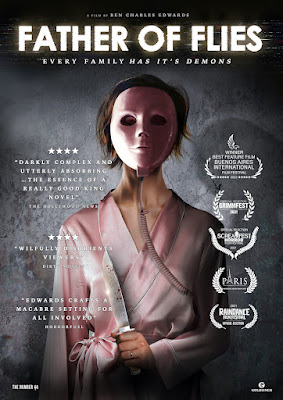 Two children live with their father in an isolated house in the forest. There's the implication that their mother is now in a mental institution. The father, Richard (Nicholas Tucci) has a new lover, Coral (Camilla Rutherford) who has moved in and is pregnant. Teenaged daughter Donna (Page Ruth) acts out while younger son Michael (Keaton Tetlow) starts having visions of something lurking in the house. One night the mother, Linda (Sandra Andreis) returns for her children. Or does she? And why does Coral wear that strange mask? And only intermittently? What's actually going on? Are things unfolding in real time, or is an event from the past now haunting the present?

I don't have any answers because FATHER OF FLIES doesn't seem to either. The fractured narrative suggests a disaster that happened in the past but what's happening in the present just doesn't tie up with it. There's certainly a strong vibe of the traditional fairy tale here (house in the woods, wicked stepmother, father has to go away on a trip) and at at least two points the television is showing documentaries about how cuckoos and parasitic insects usurp a household to replace it with their own young.

Ultimately, the reason to watch FATHER OF FLIES is because of its imagery which is strange, scary and deliciously disturbing. If Ben Charles Edwards had sorted his narrative out, or at least made it a bit clearer, then this could have been a minor classic, but at least by the end the title makes sense. As it is we have a film with plenty of weird stuff that doesn't really add up, but does make for a cracking trailer. And here it is:

Posted by John Llewellyn Probert at 8:46 am