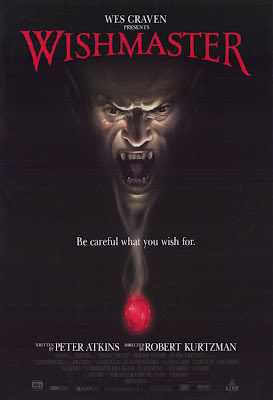 Probably the last decent gasp of a certain generation of horror cinema, I’d not seen THE WISHMASTER since its original cinema release, and on a repeat viewing recently I was actually surprised it was made so late on, as it feels very 80s indeed. It’s absolutely not great cinema, but if the old-fashioned Weird Tales (i.e. circa 1930s) had still been going I’d like to think this is the kind of story they would have published. In fact this is definitely a movie for fans of the kind of fun pulpy horror at which that magazine excelled in its heyday.
After an explanatory title card read out by PHANTASM’s Angus Scrimm, we kick off in Persia in the twelfth century where a Djinn is busy granting the wishes of the Emperor. Said wishes seem to involve a number of Screaming Mad George-style body horror effects (actually executed by KNB). A helpful wizard is able to trap the djinn in an amber jewel before the all-important third wish can be granted that will allow the djinn dominion over the world. He remains trapped there until eccentric millionaire collector Robert Englund buys the statues it’s been buried in. Unfortunately a drunken crane operator ensues that the statue gets smashed at the docks. The jewel is pinched, sold on and eventually split open by a ‘jewel analyser’ (I suppose) with the result that the djinn is free again, this time in the form of gravelly voiced Andrew Divoff who is keen to grant someone three wishes so his prophecy can come true.
Plotwise WISHMASTER is reasonably diverting and quite a lot of fun, but where the film really comes into its own is as a movie for horror fans both old and new, especially those who might get a kick out of the aforementioned Weird Tales updating with a host of familiar faces. Peter Atkins fills his screenplay with characters named after famous pulp horror and SF authors (Beaumont, Derleth, Merritt, Finney) and there’s a character called Aickman in there as well. Director Robert Kurtzman follows suit by peppering the film with various guest star turns by actors famous for their horror roles in films of the last couple of decades including NIGHTMARE ON ELM STREET’s Englund, Kane Hodder (FRIDAY THE 13TH PARTS VII to X but criminally not FREDDY vs JASON), Reggie Bannister (PHANTASM I - IV), and Tony Todd (CANDYMAN I-III and the FINAL DESTINATION series). The film also has posits the novel idea of the djinn being unable to harm anyone except by what they wish for, leading to a couple of amusing sight gags that work well. The opening credits also reads a little bit like a high school reunion of 1980s horror with not just Atkins (HELLRAISER 2 - 4) but Harry Manfredini (FRIDAY THE 13th) composing the music and Jacques Haitkin (ELM STREET 1 & 2) as director photography. WISHMASTER is low-budget horror fun with plenty of blood and a pleasingly retro feel that’s well worth ninety minutes if you’re in the mood for a dose of light horror from people who know what they’re doing.
Posted by John Llewellyn Probert at 1:00 pm

Email ThisBlogThis!Share to TwitterShare to FacebookShare to Pinterest
Labels: 1990s