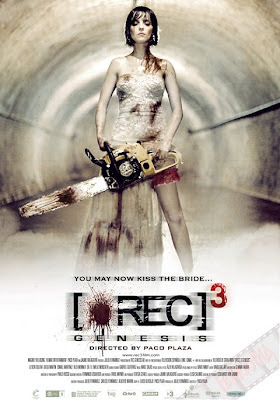 To put this review of REC 3 into context I should first state that I loved the original REC. In fact my review of it is on this site. I should also state that I really didn’t like REC 2, which substituted much of the first film’s manic kineticism and gleeful sense of anarchy for a bit too much wandering around dark corridors and attempts at quasi-religious po-faced explanation that detracted from the sheer terror of the original REC’s final scene. Much of the reason the first film worked so well for me and the second didn’t was, oddly enough, REC’s emphasis of style over substance. It wasn’t important why the events were happening, they just were, and in such a gloriously fast-paced way that even after multiple viewings I still come out of the original feeling exhausted and deliriously thrilled.
I loved REC 3.
The sense of anarchy is back - what better place to have zombies smash up than a wedding? The feeling of random violent horror is back as well, but this time there’s some comedy and a lot of romance and the whole mix works perfectly. In fact REC 3 may be one of the most romantic horror films I have ever seen, and whether or not that works for you within the context of a zombie horror picture will very much determine whether or not REC 3 is going to be your kind of thing.
Kicking off in typical ‘wedding video’ style with childhood pictures of the bride and bridegroom, REC 3 continues the handheld video recording format of the first two films as we find ourselves at the wedding of Koldo (Diego Martin) and Clara (Leticia Dolera), which is being filmed by Koldo’s cousin Adrian. We get through the marriage ceremony and the reception, learning along the way that one of the guests has been bitten by a dog earlier in the day. It’s not long before guests are being attacked and Koldo ends up trapped in the kitchen with a couple of other guests and Adrian, who is still filming. A very sly dig at the found footage format results in Adrian’s camera being stamped on, the title card of the film coming up (is this the longest pre-credits sequence ever?) and the film switching to Steadicam-filmed widescreen, which in itself has been the subject of a gag earlier on as well. Koldo is now separated from Clara and the rest of the film documents their attempts to find each other, avoiding zombie hordes along the way.
There are some delicious jokes and comedy moments in REC 3 that don’t detract from the horror one bit. A children’s entertainer whose costume consists of a massive sponge emphasises that he’s playing ‘John Sponge’ and not ‘that other children’s character you mustn’t mention’ and one of the characters isn’t a guest at all but has turned up to check on music royalties. At one point Koldo takes the armour from a nearby church display of St George and sets out with his Sancho Panza-inspired comedy sidekick who is funny for just the right length of time before he is dragged off and killed.
There are a lot of very fine touches, including the zombies all being reflected in mirrors as the creature from the original, and televisions on at the wedding are playing news coverage from the first film. The change from handheld home video to standard widescreen format is absolutely the right thing to do and prevents the film from becoming contrived.
So in case you haven’t yet realised, I really, really liked REC 3. It’s clearly a film made by a man in love, both with the genre and with the lead actress who just happens to be his wife. By turns terrifying, funny and incredibly touching, here at Probert Towers REC 3 is destined to become one of our favourite feelgood horror films of all time. There should be more like it.

Posted by John Llewellyn Probert at 10:44 am