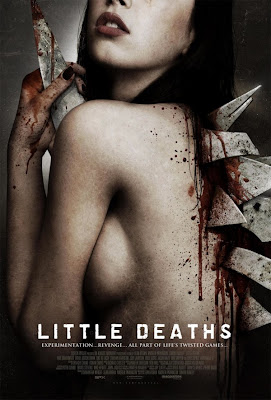 I picked up a DVD of this movie on a recent visit to the US, where, in an example of the schizophrenic attitude to censorship that seems to exist over there, the profile of the girl’s breast on the cover is covered up by a banner proudly proclaiming that the film you are about to see is ‘Unrated’.
I’d not heard of LITTLE DEATHS and it doesn’t seem to be available in a UK release version, which made me quite surprised to discover that it was a British film. With the wealth of poorly shot, badly acted, cobbled together straight to DVD rubbish that’s on the shelves these days, perhaps what was even more surprising than that was that LITTLE DEATHS is really very good. While the budget is obviously low, the film is professionally made, slickly shot, and well acted, already elevating  it way above most of the random movie acquisitions at the House of Mortal Cinema.
But the best thing about LITTLE DEATHS is that it’s what I would describe as proper horror.
There were a number of times when I was left staring at the screen thinking ‘I can’t believe they just did what they did’, and it’s been a long time since I’ve watched something sufficiently perverse and horrifying that I know I would never have come up with in a million years.
Of course there’s a danger I’m overselling this one before I’ve even told you what it’s about. LITTLE DEATHS is an anthology horror movie, consisting of three short stories from three different writer-directors. There’s no overall framework, and the stories aren’t connected in any way, other than through the themes of perverse sex and outrageous horror. The first, Sean Hogan’s ‘House and Home’ is probably the most straightforward, in which an attractive, affluent, God-fearing couple invite young homeless girls home to sexually abuse, only for it backfire on them quite spectacularly. The second ‘Mutant Tool’, by Andrew Parkinson, is even more outrageous than what it says on the tin. Somewhere in a secret laboratory a man with the biggest penis ever committed to celluloid (and that includes Frank Henenlotter’s BAD BIOLOGY) is being kept prisoner for medical experiments. Quite what the purpose of these are is never explained and the story is a bizarre and unsettling little piece that leaves you open-mouthed. Simon Rumley rounds things off with ‘Bitch’. A young woman is terrified of dogs and deals with this phobia by having her boyfriend act like a dog (including wearing an appropriate mask) during their ‘leisure time’. When she upsets him he devises a terrible means of punishment that rounds off the movie perfectly and perversely.
It’s a long time since I’ve seen a horror movie that’s horrific for the right reasons, and the fact that LITTLE DEATHS was such a random acquisition from a Best Buy store probably made the experience sweeter still, but it’s definitely worth a watch by fans of extreme British horror, who I would direct to Amazon where copies still seem to be available.
Posted by John Llewellyn Probert at 9:01 am