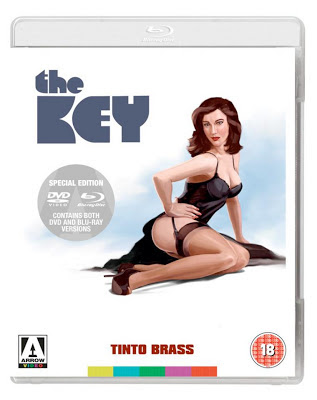 European erotica of the 1970s and 1980s was a strange and varied beast, ranging from the actually quite good (Just Jaeckin’s STORY OF O) to the downright depressingly dreadful (Jess Franco and Joe D’Amato you know we’re pointing at you here).  Often effectively blurring the lines between art house and exploitation, it’s not surprising that many of the directors who made these movies also worked in the EuroHorror genre as well which, to be honest, is the only reason I have ever tended to want to watch them. Probably the best EuroHorror/Erotica crossover is Walerian Borowczyk’s IMMORAL TALES of which perhaps more another time. For now, courtesy of Arrow Video, who have sent me review copies of some of their latest releases, it’s time to talk about Tinto Brass.
“Where there’s muck there’s usually Mr Brass” I remember reading in a popular video magazine of the early 1980s, which is probably hardly surprising seeing as CALIGULA (1979) was still unobtainable in this country in anything but a severely truncated form at that time. Because Mr Brass has never made any horror films I haven’t made that much of an effort to seek out his work. THE KEY (1983) is now available from Arrow in a pristine Blu-ray transfer and uncut, for all those of you who want to see how far softcore European erotica could go in the hands of a competent director. It was Brass’s first major film since his ‘Principal Photography’ credit for CALIGULA. Apparently his later films are more overtly erotic and we shall see as I have ALL LADIES DO IT to review as well.
THE KEY is set in Venice in 1940, with the rise of Italian fascism a constant presence in the background. Frank Finlay stars as English professor Nino Rolfe. Apparently he announced in the press of the time that he was embarrassed by his appearance in this. He then went onto do the Just and Right Thing of starring in Tobe Hooper’s LIFEFORCE (1985) about which much, much more another time. Nino is married to Teresa (Stefania Sandrelli) who is younger than him. She’s also rather  sexually repressed and he’s unable to bring her out of herself by his admittedly poor attempts at turning her on by wearing stripey pyjamas and baggy white T-shirts to bed. He writes his frustrations down in a diary, leaving the key to the drawer where he “hides” it in plain sight for her to find. When she does, she starts to keep her own diary as well. Things take a turn for the slightly odd when he starts to take pictures of her naked while she’s asleep (or pretending to be) and gets their daughter’s lover Laszlo (Franco Branciaroli) to develop them. Because this a EuroFilm there’s quite a bit of dubbing involved in this movie, as one might expect, and on the whole it’s pretty good except for Franco, who sounds as if his voice artist recorded all his lines in a very large, empty galvanised shed. Teresa begins an affair with Laszlo that is encourage by Nino. Nino has a stroke and dies, and the film ends with his funeral as there is an announcement on the radio that Italy is now at war. The credits roll to what I can only describe as the incongruously jolly strains of a saxophone version of Bavarian oompah band music.
THE KEY is an interesting film. The sense of period is spot on, the acting is very good for a movie of this type, and occasionally Brass manages some interesting and creative camera setups, mainly (and unsurprisingly) in the sex scenes. As I said above, Brass is a competent director, and he occasionally shows flair, but for me he lacks the stylish sexual mise-en-scene of Radley Metzger or the photographer’s eye for composition of Just Jaeckin. THE KEY isn’t a bad film by any means, but it’s far more a period piece with the occasional bit of sex in it than the all-out fest of depravity those unfamiliar with Brass’ work may be expecting from having only heard about CALIGULA. Ennio Morricone did the music and he has a lot of fun playing on themes by Strauss and Schoenberg to produce a score that is much lighter than a lot of his work.
Arrow’s transfer is top notch and, as I said above, uncut. There are both English and Italian dialogue options, a trailer, a booklet about the movie by Brass scholar Alexander Tuschinski, a reversible sleeve and finally an inlaid postcard for Arrow’s forthcoming Blu-ray release of LIFEFORCE!
Posted by John Llewellyn Probert at 9:11 am