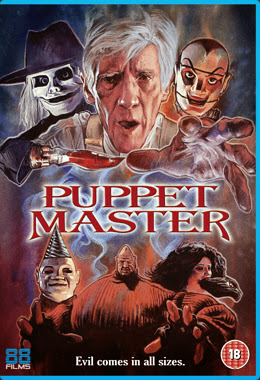 British company 88 Films seems to be making a bid to be the Entertainment In Video for the DVD generation. For those who don’t know, EV (as it was called) was the company responsible for releasing each and every Charles Band Empire production on VHS in the UK back in the 1980s. I’m not sure if 88 have the rights to the Empire catalogue, but they certainly have an awful lot of films made by Full Moon, the company Band formed after Empire went under. I’ve already reviewed their exceptional release of Stuart Gordon’s CASTLE FREAK that contains Band’s THE EVIL CLERGYMAN as an extra, and I’ll be covering some more 88 Full Moon releases in due course.
But now to PUPPET MASTER, a film which has given rise to, at the last count, nine sequels (yes I said nine) as well as crossing over to other Full Moon films like DEMONIC TOYS (which I’ve already covered). So the question is, is the original PUPPET MASTER a blisteringly brilliant piece of horror cinema or is Charles Band just getting the absolute maximum value for money (and then some) out of David Allen’s funny little creations? 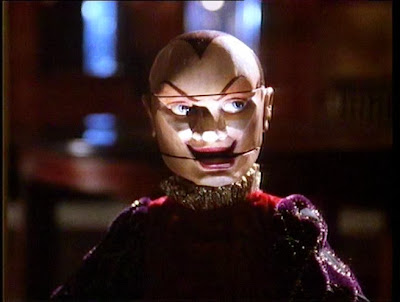 It’s 1939. At the Bodega Bay hotel in California, master puppeteer Andre Toulon (William Hickey) has discovered the ancient Egyptian method of being able to imbue his inanimate puppets with life. But the Nazis are after the secret and as they break down the door to his hotel room he shoots himself.

The present day (well, 1989). A group of psychics are contacted by their colleague, Neil Gallagher, who has found Toulon’s final hiding place. They include Paul Le Mat and his amazing hair, lovely Irene INFERNO Miracle and her stuffed dog, and Matt Roe and Kathryn O’Reilly as a pair of researchers who have psychic experiences through sex (one assumes it’s very unlikely they will make it to the end of the film as soon as we meet them). They converge on the hotel only to find that Gallagher’s dead and Toulon’s puppets are still very much alive. People get killed by the puppets, there’s a twist, and the stuffed dog comes back to life. The end. 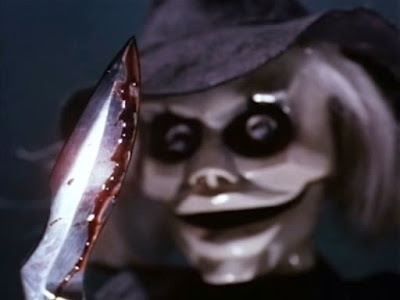 PUPPET MASTER isn’t at all bad, and the puppets are a lot of imaginative fun, with the leech woman being especially unsettling (where do all those leeches come from anyway?). The film was originally intended for cinema release before going straight to VHS in 1990. In his introduction Band explains that this version is the first time the 1.85:1 master has been used since the film was made and so if you’re a fan of the film, this is definitely the version to get.
88 Films’ release is a widescreen transfer as stated above. It also includes two commentary tracks, one from Charles Band and another from Justin Kerswell and Calum Waddell. There’s also a making of featurette and the Full Moon Trailer Park which features promos for another ten films. This is actually a very nice package and if you’re a fan of PUPPET MASTER, or wanting to discover it for the first time, this is the version to get.

Posted by John Llewellyn Probert at 8:08 am