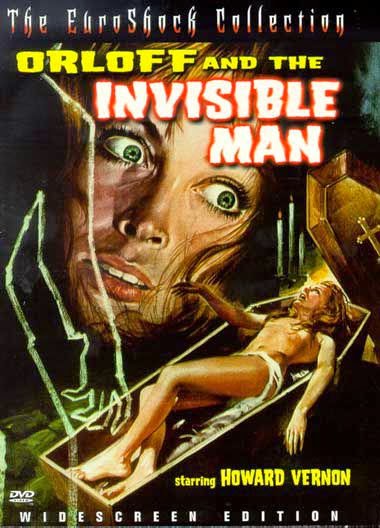 It’s been too long since we’ve had a Jess Franco review on here. I’d been missing the world of crash zooms, jarring editing and naked young ladies boasting what one kindly presumes are merkins made from badgers, and I’m pleased to say I was amply rewarded with all three in the shape of ORLOFF & THE INVISIBLE MAN. What completely surprised me was that this movie wasn't directed by Mr Franco at all, but by Pierre Chevalier. I have to say, though, that M. Chevalier has managed a splendid job of making something that could be considered worthy of being considered a Franco film.
We are somewhere in eighteenth century Europe (I’m guessing). The weather is grim and wet, usually due to actual rain but sometimes, in a rare and impressive attempt to provide some continuity, due to a watering can just out of shot being poured from above the camera. This dreary gothic milieu is further augmented by a hero with a red satin-lined cloak, a serving girl with no bra on, and a rickety old coach that gets stuck in the mud. Putting an interesting spin on the proceedings (and goodness me they do rather need it) is a somewhat peculiar jazz score that seems to consist of various instrumentalists plucking and blowing notes at random with little thought for what their colleagues are up to. Sometimes everyone just gives up and snaps their fingers, presumably to gain the attention of whoever was providing them with the hallucinogenic drugs that made them think what they were producing was actually music. 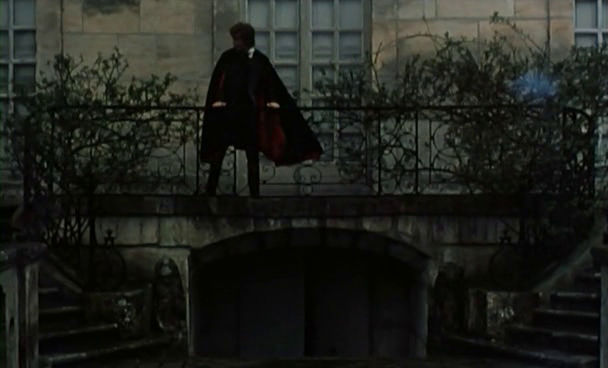 But on to the plot. Handsome young Dr Garondet (F Valladares) is asked to come to the castle of Professor Orloff (Howard Vernon). Leaving the dreary rain-drenched village where he lives proves to be difficult, however, as none of the locals are willing to take him near the place. He eventually gets there under his own steam, only to find himself in a Monty Pythonesque exchange with a manservant before encountering a maid who appears to be busy doing some colouring in on the kitchen table. There then follows the kind of stilted dialogue exchange that will have many an amateur dramatics enthusiast weeping, and if you want more of this we only have to wait until the doctor meets Cecile (Brigitte Carval). She’s Orloff’s daughter and is in the habit of staring off into space a lot while she describes things that have happened to her that are way outside the special effects budget of this. 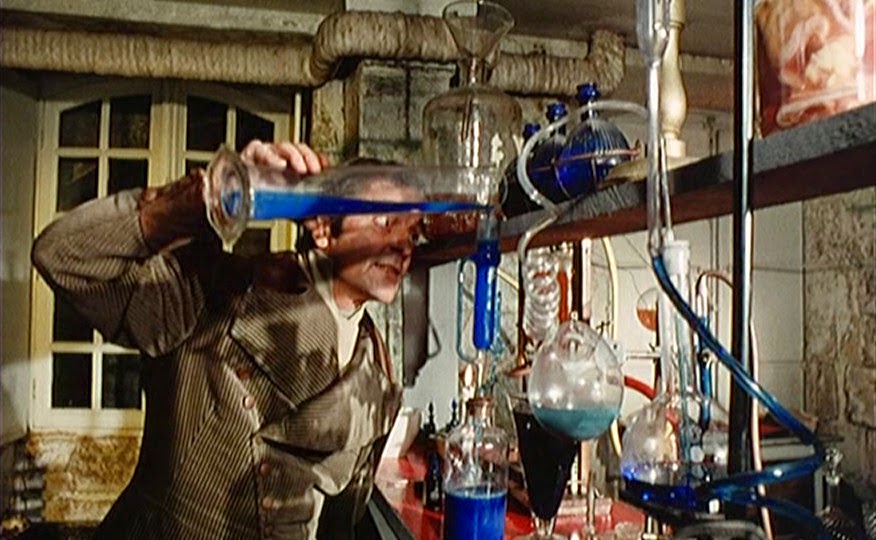 Garondet finally meets Orloff, and before you can say ‘I hope we get a crash zoom on that stuffed owl on his desk’ we have because it’s flashback time! Apparently Cecile died and was put in the family crypt, where two of Orloff’s servants broke in to steal her jewellery. She came back to life, got stabbed, but made it back to the house, whereupon the bloke thief was imprisoned while his partner, pausing only in her desperate, frenetic escape from Orloff’s hounds to try on all the jewellery she’d stolen while sitting by the river, got beaten for her efforts. 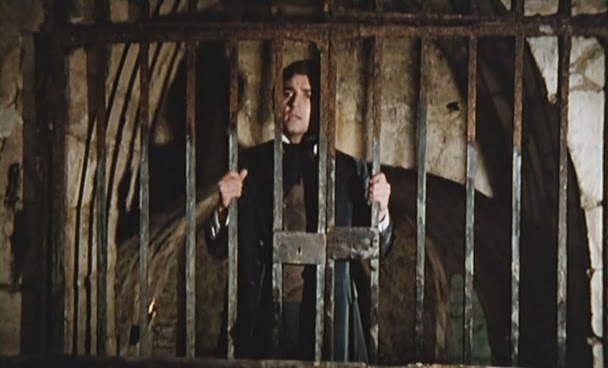 Then it’s back to the owl. Orloff has created an invisible man who can serve drinks and bump into furniture. He’s also capable of chasing serving girls around and (because this is a Franco film after all) tearing all their clothes off and ravishing them in a scene which goes on and on and on and on.
The doctor gets locked in the dungeon but he escapes. Cecile gets undressed and reveals that her merkin is made from two badgers. The invisible man becomes visible, leading to the revelation that when Orloff rendered him invisible he forgot to make him take his fancy dress gorilla costume off first. Well, science is difficult sometimes and a mad scientist can’t be expected to remember everything. The doctor bonks semi-visible-gorilla-man on the head and he and Cecile escape. The castle burns. Something else happens that doesn’t make much sense. The end.
The print of ORLOFF & THE INVISIBLE MAN that I saw lasted 76 minutes and even that seemed a long time. Oddly enough, while it drags and the acting is on the whole dreadful, it’s nowhere near as bad as the worst Jess Franco film I have ever seen. There are a couple of instances here where the director is trying to set up an interesting shot, and perhaps if he had had another half an hour allocated to his shooting schedule he might have actually achieved it. The camera isn’t always static (it is quite a bit, though) and the locations are interesting, but that’s about it. In case the casual visitor to this site is wondering - ORLOFF & THE INVISIBLE MAN is one for hardened fanatics of this sort of thing only. You have been warned.

The print of ORLOFF & THE INVISIBLE MAN used for this review was part of Image Entertainment’s 4 DVD Orloff box set that’s currently on sale in US discount stores for around $9. It’s up to you to decide if that’s a bargain or not.
Posted by John Llewellyn Probert at 8:48 am

Email ThisBlogThis!Share to TwitterShare to FacebookShare to Pinterest
Labels: 1970s, Trapped in the Room With It