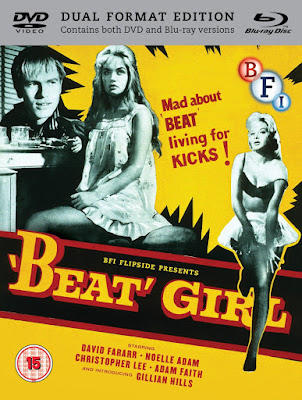 "Straight from the fridge, man!"

Oh yes, the BFI continues its ‘Flipside’ series of films demonstrating the more curious aspects of British cinema with this ‘bad little rich girl’ slice of black and white exploitation from 1959 filled with dialogue just like that.
Spoilt, petulant, pouty Jennifer (Gillian Hills) is upset when her father (David Farrar) returns to the horrid minimalist apartment building where they live (and which he designed) with his spanking new French wife (Noelle Adam). Her father’s attention diverted from being devoted all to her, Jennifer flounces off to her gang of beatnik friends which include Shirley Anne Field (another posh girl gone bad, or at least it sounds like it), Adam Faith (who could be a robot that’s wandered in from a Twilight Zone episode. Think about it if you watch this. I’m convinced the guitar he carried with him all the time was some kind of battery pack or alien communicator or something), Peter McEnery (coughing alcoholic - I mean his character, not the actor) and Oliver Reed (hooray!).

They spend their nights grooving in a basement dive to the quite splendid, menace-laden and dangerous-sounding pop tunes of John Barry. The place they dance at is just over the road from Christopher Lee’s strip club. I know. Anyway, it’s called Les Girls (presumably for added appeal to those punters who can’t speak French) and boasts good old Norman Mitchell on the door and the always excellent Nigel Green as  the chap whose job it is to push the strippers on to the stage.

It turns out Jennifer’s new stepmother has A Bit of a Past. This gives Jenny the excuse to be even more annoying as she bops in Chislehurst Caves way before INSEMINOID found itself down there (Adam Faith had probably already journeyed to the future to see it, of course), and takes everyone back to her place after a game of chicken (I mean car racing, not some weird 1950s British perversion involving poultry but now I wish that’s what happened). Father’s annoyed, Jennifer runs off AGAIN and Christopher Lee says he’ll take her to Paris in return for the usual. Mr Lee grumbled like hell about being in Hammer’s THE MUMMY that same year but he should really have been complaining about having to be in stuff like this.
Bad stuff happens. The End.

Well I’m not going to give it away, am I? BEAT GIRL is utter trash. It’s curious trash, certainly, but there’s nothing here for anyone other than those interested in the low-budget exploitation pictures of this period. The BFI’s booklet has a bit on director Edmond T Greville that tries to make him out to be worthy of reappraisal. The only other film of his I’ve seen is his 1960 THE HANDS OF ORLAC and neither that nor this really makes me want to see anything else. Although, I have to say if you scratch the surface of BEAT GIRL Mr Greville he does seem to have a fondness for ladies’ bottoms (and who doesn’t?). That, combined with the fact that the whole film could be read as a propaganda tale - all Jennifer is really calling out for is to be put over someone’s knee - and perhaps you have the beginning and end of the spank suspense subgenre.
The BFI’s dual disc set gives us as much of BEAT GIRL as anyone could probably want, with three versions of the film, a new Gillian Hills interview, and some short extras. BEAUTY IN BRIEF and GOODNIGHT WITH SABRINA are both brief British glamour films from the 1950s and as as terrible as any sane person might suspect. The highlight of the disk for any BritHorror fan is going to be CROSSROADS, a twenty minute tale of supernatural revenge starring Christopher Lee and Ferdy Mayne that wouldn’t have been out of place in an Amicus anthology.
Did I like BEAT GIRL? Well, it was certainly interesting to see quite a few familiar faces in the peculiar setting of 1950s BritMovie Beat ‘N’ Sleazeland. And I have to say, I AM still humming that John Barry theme. Another interesting Flipside release.