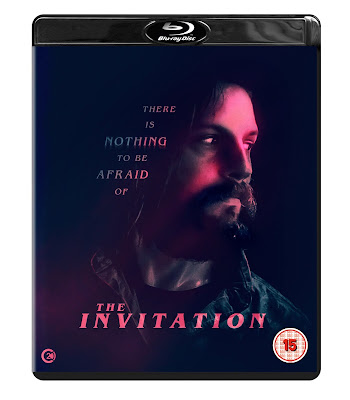 One of the best films of 2015 (and quite possibly this decade) gets an extras-packed whistles and bells Blu-ray release courtesy of Second Sight.
When Will (Logan Marshall-Green) accepts a dinner invitation from his ex-wife Eden (Tammy Blanchard) at the house in LA that once belonged to both of them, he doesn't realise that the tragic history they share isn't the only horror he and his new girlfriend Kira (Emayatzy Corinealdi) are going to have to face.

Because the party isn't just for Eden and her new partner David (Michiel Huisman) or for their friends. The guests include the sinister Pruitt (John Carroll Lynch) and the worryingly brittle Sadie (Lindsay Burdge), two of the people Eden and David met during a retreat that they claim helped them to deal with grief. As the party progresses and tensions start to build it becomes clear not everyone might last the night. In fact no-one might.

A superb thriller that starts off relatively relaxed but quickly starts to ratchet up the tension until by the third act you want to push yourself away from the screen and the events that are unfolding, THE INVITATION is one of those rare low budget movies where everything works perfectly. The performances (especially Marshall-Green) are affecting, the script is clever and the sound design complements the onscreen action to make things even more uncomfortable. The star, though, has to be director Karyn Kusama. Who would have thought the director of AEON FLUX would make something as surprisingly excellent as this? Kusama's direction of the ensemble cast feels effortless, which in itself is a testament to her skill at slowly ratcheting up the tension while allowing each of the many speaking parts to breathe. 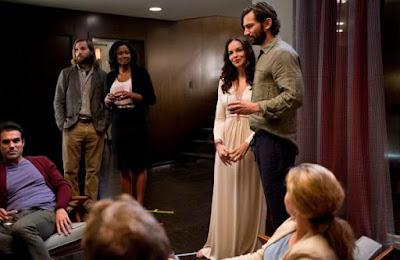 Second Sight's Blu-ray carries over the Region A discs extras - a commentary track from Kusama and screenwriters Phil Hay and Matt Manfredi plus a making of - while providing use with over 90 minutes of new ones. There's a new 33 minute interview with the director, another with producer Nick Spicer, yet another with the screenwriters and finally Lindsay Burdge talks about playing the part of Sadie.

It's been a long time in coming to the UK but finally THE INVITATION has the presentation it very much deserves. Pop it in the player and just feel that mounting unease. An excellent package from Second Sight and highly recommended.

Karyn Kusama's THE INVITATION is out on Blu-ray from Second Sight on Monday 4th November 2019
Posted by John Llewellyn Probert at 8:55 am