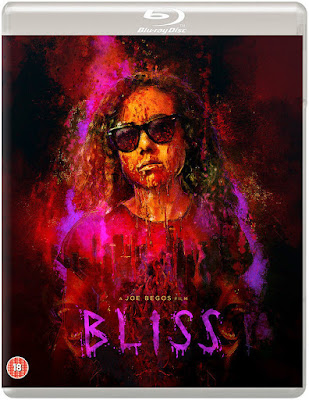 "A Nightmarish Visual & Aural Assault on the Senses"

I mean that as a good thing, by the way. In fact quite possibly a brilliant thing. Joe Begos' exhausting, exhilarating, cathartic take on art, drug addiction, vampirism and so much more gets a UK Blu-Ray release from Eureka.

Blocked artist Dezzy Donahue (Dora Madison) is going through a bad patch. Struggling with her latest work, dumped by her agent and behind on the rent, instead of sorting out her life she spends her nights in a haze of drunken drug and sex-fuelled debauchery. Somewhere along the way, she's given something that might (or might not) turn her into a vampire.

Whether it's the drugs, the blood, or something else, suddenly Dezzy can paint again and she starts work on what she is convinced will become her masterwork, even if everyone she knows is going to end up as bloody casualties of her newfound addiction as a result. 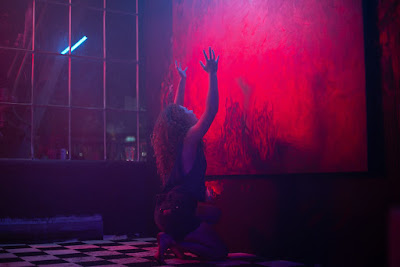 With a pounding soundtrack (which sounds great on Eureka's 5.1 mix), enough camera craziness to make Gasper Noé jealous and a tremendously assured visual sense of the artsy sleazy world Dezzy operates in, BLISS only lasts 80 minutes but that's quite long enough to spend with your breath held and every muscle tensed. It's such an assault on the senses that anyone despondent about the lack of colour and intensity of experience offered by the SUSPIRIA remake would be well advised to check this one out. 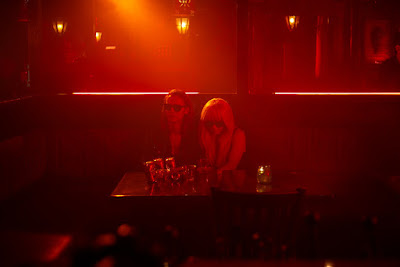 Reminiscent of the work of Abel Ferrara and early Penelope Spheeris, BLISS has the original EVIL DEAD's sense of ferociousness in its no-holds-barred take-no-prisoners approach to its storytelling. Dezzy's artwork, once complete, is a hellish joy all its own to behold, like something from Lovecraft filtered through the lens of MANDY.

Eureka's Blu-ray offers three commentary tracks. Samm Deighan and Kat Ellinger offer a detailed contextualisation of the film both in terms of vampire cinema and modern horror film. Joe Begos and Dora Madison provide a laid back but information commentary on the making of the film, backed up by the third commentary track which features Begos, producer Josh Ethier and the FX team. There's also a deleted scene and a trailer.

Finally, if you get the limited edition (1000 copies) there's also an O Card slipcase with laminated finish and a booklet featuring new writing on the film from Alexandra Heller-Nichols & an interview with Joe Begos.

Posted by John Llewellyn Probert at 8:56 am