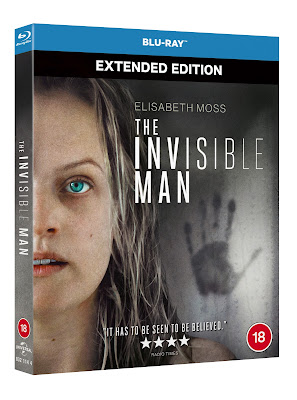 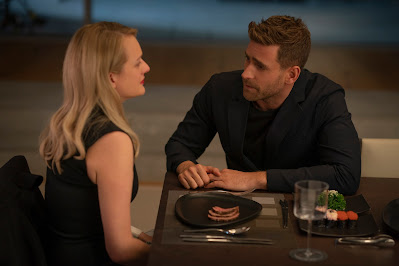 Cecilia Kass (Elizabeth Moss) escapes her abusive relationship with rich optics company founder Adrian (Oliver Jackson-Cohen) only to learn two weeks later that he has apparently committed suicide. Adrian's lawyer brother Tom (Michael Dorman) informs Cecilia that Adrian has left his fortune to her, to be paid at regular intervals provided she commits no crime and is not declared insane.

It's not long before strange things begin to happen. Cecilia goes for a job interview and her portfolio has disappeared. Her sister Emily (Harriet Dyer) claims Cecilia has sent her a hateful email. And why does it feel as if there's frequently someone watching her? 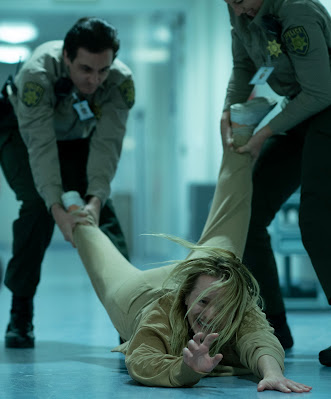 Jettisoning everything from the H G Wells source novel (the poor old author doesn't even get a credit) except for the concept - which is now due to a piece of advanced tech rather that a drug - and the surname Griffin for the man who wields it, Leigh Whannell's film is a splendid updating of a concept that hasn't been filmed seriously since a couple of short-lived TV series of the 1970s (one with David McCallum, the other - Gemini Man - with Ben Murphy).

Combining elements of the stalker thriller with sequences suggestive of John Carpenter at his most HALLOWEEN-esque, the entire endeavour is rounded off a treat by a superb central performance by Moss, who anchors the whole film and makes it believable. The action sequences are as well constructed as one might expect from the director of the excellent UPGRADE and if you're a fan of the Whannell-written SAW series look out for a special in-joke just for you at around the 90 minute mark.

Extras on Universal's Blu-ray include 14 minutes of deleted scenes, a ten minute featurette with Leigh Whannell and shorter pieces on Elizabeth Moss and the other actors. There's also a feature-length commentary by Whannell but this was not provided for review.

Leigh Whannell's THE INVISIBLE MAN is out on digital for purchase on Friday 19th June 2020 and 4KUHD, Blu-ray and DVD from Monday 29th June 2020.
Posted by John Llewellyn Probert at 9:11 am