Two new DVD release from Signature Entertainment have dropped through the HMC letterbox this week so here are a few words about both: 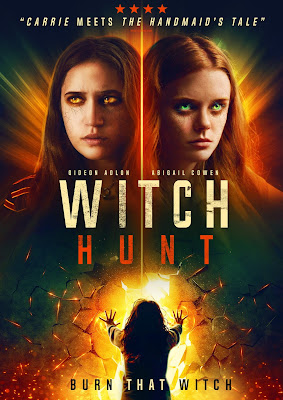 In the present day United States in a parallel universe amendments to the constitution have meant that witchcraft remains a punishable offence. The ability to cast spells seems to be only something women can do and so it's teenaged girls who are subjected to prick testing and ducking in their school swimming pool in between lessons. Convicted witches are burned at the stake. But there's an underground that exists to get those with magical abilities smuggled across the border to Mexico. Martha (Elizabeth Mitchell from THE PURGE 3) runs a safe house for accused witches but the authorities are on to her, the situation made all the worse because her daughter Claire (Gideon Adlon) might be exhibiting magical abilities herself.

Very much in the style of THE HANDMAID'S TALE, Elle Callahan's film delivers it's anti-persecution message with broad strokes in a film where any and every white man is a villain. It's well made with nice characterisations even if it is all a bit heavy handed, and if nothing else it's yielded some amusing imdb "reviews" from the very people designed to be rubbed up the wrong away by this sort of thing. Anyway, here's the trailer: 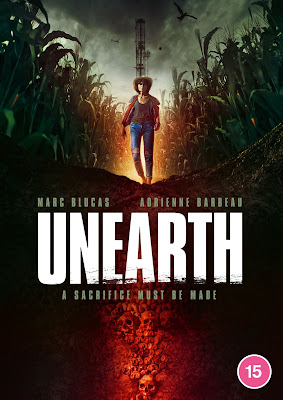 Ecohorror meets body horror in UNEARTH, which got its UK premiere at last year's Grimmfest. A fracking company comes to a small American town and should spell the answer for two feuding farm families who have hit hard times. Unfortunately the drilling releases something nasty that's been lying dormant in caves deep underground.

UNEARTH is rather slow-paced but that, plus a cast that features some familiar faces including BUFFY's Marc Blucas and toplining Adrienne Barbeau in the kind of role she's probably been waiting for her entire career, gives what is basically a human interest story time and space to develop. Don't go in expecting something action-packed and what you'll find is a decent little ecological horror picture that went down well at Grimmfest and is now getting a deserved DVD release. Here's the trailer for it:

Both WITCH HUNT and UNEARTH are now out on DVD and Digital platforms from Signature Entertainment.

Posted by John Llewellyn Probert at 8:41 am