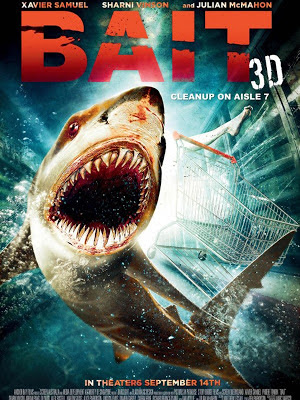 This Australian rip off of SNAKES ON A PLANE should really be called SHARKS IN A SUPERMARKET and who knows, in some territories that demand more accurate titlings perhaps that’s what it’s called. Sadly the line ‘I’ve had enough of these motherfucking sharks in this motherfucking supermarket’ isn’t in evidence, which is a shame, as otherwise it would easily win best trashy movie dialogue of the year. Many of the other elements of David R Ellis’ Corman homage are all present and correct, though, and if you had a thoroughly chucklesome time with Samuel L Jackson and the gang in that, the chances are you’ll have a ball with this too - I know I did.
Xavier Samuel (from THE LOVED ONES, a properly good Australian horror picture) plays Josh, a former lifeguard who, because of some pre-credits shark based trauma now earns a living stacking shelves in the local Oceania supermarket. Life in this supermarket appears to be rarely dull, as all the cliched characters you seem to get in monster movies like this shop there. It’s an especially bad day for Josh because his girlfriend Tina (Sharni Vinson) who left him for foreign shores after he decided to live in a filthy flat and lost his ability to spoon coffee into a mug properly has returned from the Exotic Foreign Land of Singapore (which happens to be a coproducer of BAIT 3D) with her hunky Singaporean boyfriend in tow. Scarcely do they have the chance to exchange smouldering glances across a crowded baking products aisle (Josh and Tina I mean, although the alternative might have been even more fun) than vicious hardened B-movie criminal Julian McMahon is carrying out a one-man holdup, cunningly disguising himself as a customer by wheeling a trolley for all of two seconds before abandoning the subtlety route and pulling his weapon out (I know I know but a film like this positively begs you to have whatever fun with it you can).
Josh’s day couldn’t possibly get any worse, could it? Well before you can say ‘What’s that coming over the hill?’ a MASSIVE tidal wave has swept through the town and the supermarket, submerging most of its quality goods and letting in a couple of sharks for good measure. Most of the cast (I won’t say stars as that would be a bit too charitable) get trapped on the upper floor of the supermarket and have to spend their time jumping from frozen meat counter to frozen meat counter while they try to think up ways to avoid / trap / get eaten by the shark. And oh my do they come up with some incredibly silly ones that I shall leave you to find out for yourself.
Just in case this film isn’t a whole load of enough stupid already there are also a group of secondary characters trapped in the downstairs car park, including the horror standbys Bickering Couple and Annoying Small Dog. Some of the dialogue here is priceless, and I actually mean that in a good way. When a joke about fake Gucci shoes has you smiling while an improbably enormous killer fish ambles past the characters delivering the dialogue you know you’re having a good time with a very silly film.
BAIT 3D is very silly indeed. It is also much, much better than what I was expecting to see. Fans of sub-par rubbish like the recent spate of Roger Corman SyFy movies like DINOCROC vs SUPERGATOR and of course the now immortal drive-in cheesiness of SNAKES ON A PLANE will have a great time with it. I also have it on good authority that a sequel script is currently being ironed out - I kid you not. Apparently BAIT 2 will be set in a school that suffers the same treatment as the supermarket here. On the basis of how much fun I had with original, the makers of BAIT 2: SCHOOL OF SHARKS can have my price of admission right now. But only if they use that title.
Posted by John Llewellyn Probert at 1:09 pm