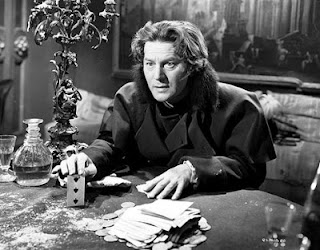 It’s time for a bit of class at House of Mortal Cinema. Thorold Dickinson’s film of Alexander Pushkin’s short story is something that had entirely passed me by until it was flagged up on Facebook recently as being a ghost story worth seeking out. It certainly is that, but it’s also an extremely well made, cleverly shot film that’s well worth 91 minutes of any film aficionado’s time, with a couple of turns by future stars of BritHorror to make things even more fun.
Anton Walbrook is Herman Suvorin, a lowly Captain in the engineers of the St Petersburg Russian army of 1806. Obsessed with the card game of Faro (the rules are explained in the film and it’s very easy) he refuses to play unless he can be guaranteed to win. Seeing as Faro is purely a game of chance this seems impossible, until he wanders into what looks like a 1920s German expressionist movie version of an Amicus anthology movie bookshop, complete with devilish-looking proprietor and books to match. He picks up the one about selling one’s soul for gain and reads the tale of how, many years ago, the Countess Ranevskaya (the mighty Edith Evans in 1806 time) sold her soul to win at that very same card game so that the money stolen by one of her many lovers could be returned before her husband found out. The Countess just happens to be very much alive and living in St Petersburg. Suvorin hatches a scheme to make contact with the old woman, but it all goes wrong and she dies as a result. Later he’s visited by her ghost who reveals how to win at the card game but only at a price.
There’s a lot to love about THE QUEEN OF SPADES. The first half an hour is pure gothic horror, the second act may have you wondering if it’s going to get scary again but then it does, in spades (sorry), and by the time the film is over I was wondering why on earth I had never heard of it before. The production design is stunning and, as mentioned above the photography makes many of the scenes feel as if they are from a film shot thirty years earlier. The cast is uniformly excellent, with Walbrook and Evans playing their very best unrestrained gothic. The rest of the cast includes a wealth of faces who would become familiar to Brit Horror fans including Ronald Howard (CURSE OF THE MUMMY’S TOMB), Yvonne Mitchell (DEMONS OF THE MIND), Anthony Dawson (CURSE OF THE WEREWOLF), Miles Malleson (DEAD OF NIGHT & many others), Michael Medwin (NIGHT MUST FALL and lots of British TV) and if you look closely you’ll spot Hammer’s favourite landlord, George Woodbridge (Mr PIPKINS himself) as a footman.
The real star of QUEEN OF SPADES, though, is director Thorold Dickinson, Bristol born and a director of apparently international standing. Some of his framing, camera setups and overlays are just marvellous, to the extent that if they were seen in a film today they might be considered impressive: a shadow ‘ghost writes’ a letter; a spider’s web is superimposed on the face of a female victim about to be ensnared in a trap, and the way in which the ghost’s visit is enacted are all wonderful moments in a movie that rewards repeat viewings. An unexpected treat.
Posted by John Llewellyn Probert at 9:30 am