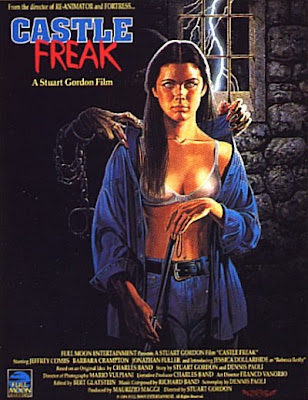 Stuart Gordon does Jess Franco in this exploitative, curiously tasteless item from 1995, now given a new lease of life on Blu-ray in the UK courtesy of 88 Films.

Apparently inspired by the pairing of a Charles Band brainwave (basically the title and a poster of a hunchback flogging a chained up girl) and Gordon’s desire to film H P Lovecraft’s classic short story The Outsider, CASTLE FREAK will certainly satisfy those audience members watching it in the hope of seeing some of the former. Those shelling out their money to watch it on the basis of the Blu-ray poster art (a blind girl in her bra being threatened by an unseen monster, reproduced here so you don’t have to go searching for it) will likewise find that the movie delivers on that score, too. So what’s it all about?
Ex-alcoholic and accidental five-year-old-son murderer and teenaged daughter-blinder John Reilly (Jeffrey Combs) inherits an Italian castle after it turns out he’s apparently a distant relative of the reclusive duchess who lived there. He moves there with the aforementioned still-living daughter Rebecca (Jessica Dollarhide), and wife Susan (Barbara Crampton) who still hates him for his pissed-up child-killing / mutilating activities while out driving one night. John finds a flogger under the duchess’ bed while Rebecca goes off for a wander, only to be led by a ginger cat to a cell where a mutilated monster of a human being has been kept prisoner by the duchess. The cat gets eaten and Becky’s claims that there is someone else in the castle with them fall on deaf ears.
Susan still insists on she and John having separate bedrooms so John finally finds himself yielding to the bottle once more. There’s J&B on the shelf at the local tavern but they serve him Jack Daniels, despite the fact that CASTLE FREAK is almost a 1990s version of the 1970s EuroHorrors where the J&B ran in rivers and semi-naked girls ran away from deformed monsters just they will in this film in a bit.
Once he’s drunk the entire bottle it’s the traditional EuroHorror Take An Italian Prostitute Back To Your Castle Moment, which he duly does. After a bit of drunken fumbling and the consumption of more wine he’s had enough and said lady of the night is left to make her own way home. She doesn’t get very far, however, as the titular beastie is lurking nearby to pounce on her, chain her up, and indulge in a bit of tasteless cannibalism of frankly Jess Franco proportions, although admittedly better filmed. 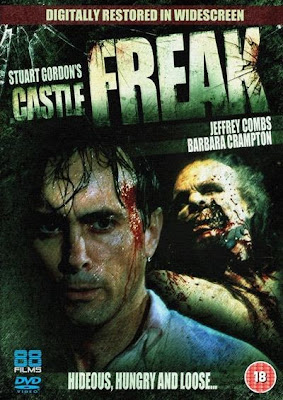 This, of course, means trouble for John as when she fails to turn up for work the next morning (or whatever it is small Italian village prostitutes get up to in the daytime in these films) the police think he’s killed her. It also doesn’t help that the chief of police has had a baby with her (this must be a very small village indeed). John gets arrested just as he’s in the process of proving that the duchess’ son didn’t die when he was five, that he isn’t buried in the family crypt and that he is - horrors! - still skulking around the castle after years of being beaten by his mother (you’ll find out why when you watch the film). There’s only just time for John to escape from police custody and save his wife and daughter from the creature in a death plunge that kills him as well. The End.
Like I said above, CASTLE FREAK is a curious film. It lacks the verve and style of Gordon’s Lovecraft adaptations like REANIMATOR and DAGON, despite having a script by his regular collaborator Dennis Paoli. Instead the whole thing feels a bit rushed and a bit insubstantial, with some unpleasant murders thrown in to give us a reason to be repelled by the monster (a great performance by Jonathan Fuller, by the way). It’s mainly a film for aficionados of Stuart Gordon and his stars, but anyone who loves the sleazy EuroHorrors of the 1970s will definitely get a kick out of it as well.
88 Films have put together a lovely package here. The Blu-ray transfer has some dirt on the source print and the image is quite grainy, but I suspect this film is never going to look beautiful. There’s a short interview with Gordon on the extras, along with trailers and a featurette on the making of the film. The real coup here, however is the inclusion of Charles Band’s short film THE EVIL CLERGYMAN as an extra. Made in 1987 and intended as part of an anthology film, it hasn’t been seen in over 20 years. It’s almost worth the price of the disc in itself (and US fans have had to fork out for this short on its own so we should count ourselves lucky), which is why I’m going to give it its own write-up. With this, the extras, and CASTLE FREAK itself, the whole thing makes for an excellent evening’s exploitation entertainment.