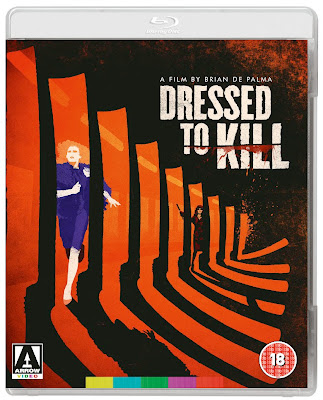 Before I begin this review proper I’ll make an admission: DRESSED TO KILL is my favourite Brian de Palma film. Some prefer SCARFACE, others think CARRIE is his horror highpoint, and THE UNTOUCHABLES the absolute pinnacle of his career. But for me it’s DRESSED TO KILL that I can watch over and over, and for a multitude of reasons. Bearing this in mind I was already excited when I received the news that Arrow Films were bringing this little masterpiece out on Blu-ray, and with a horde of extras as well. And this package doesn’t disappoint.
Nice, likeable, middle-aged housewife Kate Miller (Angie Dickinson) lives a dull, unfulfilled, middle-class New York life. She is married to Mike (Fred Weber in what must be one of the most thankless roles in cinema), who provides her with a boring sex life. She also has a teenaged son, Peter (Keith Gordon), who is something of an electronics whizz. One morning, after an appointment with her psychiatrist Dr Robert Elliott (Michael Caine) Kate pays a visit to a museum (it’s actually the Philadelphia Museum of Art on the inside). There she meets a man who takes her back to his place for a bit of afternoon bedroom shenanigans. Getting ready to leave, she finds a letter notifying the chap of having a venereal disease (were New York clinics always this sensitive about breaking bad news? In capitals, no less!). Leaving the building she’s attacked in the elevator by a woman wielding a razor and her bleeding, dying body is discovered by call girl Liz (Nancy Allen) who becomes the killer’s next intended victim. 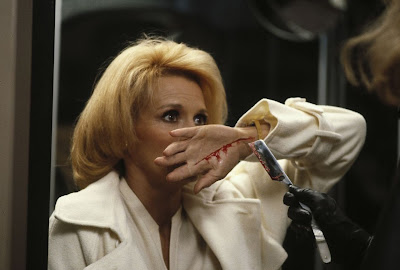 Most people know how DRESSED TO KILL pans out, but in case you don’t I’m not going to reveal any more, suffice to say that this is Hollywood cinema at its most stylish, operatic, and (dare I say it but I’m going to anyway) giallo. When it was originally released DRESSED TO KILL came in for a lot of criticism for being overly misogynistic. Even when I first saw it, at the tender age of 14, I wondered how critics could view a film so superficially. Angie Dickinson’s murder in the lift is supremely horrible - in fact it’s one of the great operatic moments of horror cinema - but one of the reasons for this is because we’ve come to like and sympathise with her beforehand. In fact, if anything it’s men who get a rough portrayal in this movie. The male characters in the world of DRESSED TO KILL are either beer-swilling useless insensitives (poor old Ted), geeks (Peter), STD-infected lotharios (the chap from the museum) or nutters (guess who). Women come out of this better than men, but at the end of the day, and in the world of the giallo (because it is, come on, of course it is) the individual characters don’t matter as much as the overall style of the piece. And what style! It’s a testament to de Palma’s skill as a film-maker that DRESSED TO A KILL is a film that doesn’t stand up to repeat viewing from a logical viewpoint (the film cheats all over the place, often so blatantly you can’t help but see de Palma evincing a cheeky grin while doing do) but nevertheless it’s a film you have to see several times to appreciate the sheer technical accomplishment of the piece, as well as the many subtleties that you may miss the first time around. 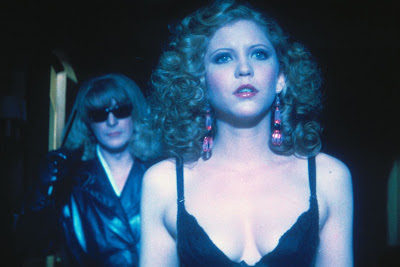 Like I said above, despite all its problems of narrative logic, and the way it does several naughty things that can’t even be described as sleight of camera to distract, deceive and manipulate the viewer, DRESSED TO KILL remains one of my favourite films, mainly because de Palma’s style is so arresting and so mesmerising. There are other factors too, however. The acting from Dickinson, Allen, and Keith Gordon is very good indeed, and pretty much lets us forgive Michael Caine who does feel a bit out of place in this (although I can’t think who would have been better in the role - another curious DRESSED TO KILL dichotomy!). As mentioned above, the elevator murder remains an operatic triumph of direction, editing and music. Pino Donaggio’s work deserves special mention because it really is one of the best dramatic scores composed for a film of this type. Criticised by those with nothing better to do at the time as being a pale imitation of Bernard Herrman’s score for PSYCHO, Donaggio’s music actually goes well beyond that. While the scraping strings of PSYCHO’s shower murder are imitated in the elevator scene, Donaggio underpins them with woodwind to create an effect that, if anything, feels even more violent and over the top, in keeping with the operatic nature of de Palma’s film.
Arrow Films’ Blu-ray of DRESSED TO KILL has been remastered by MGM studios, but anyone expecting revelatory new image quality might be a bit disappointed. The museum scenes (and the art in them) now look crystal clear but I suspect the original photography of many of the darker sequences is always going to look a bit grainy. The good news is that the uncut version of de Palma’s movie is now available for the first time in the UK. 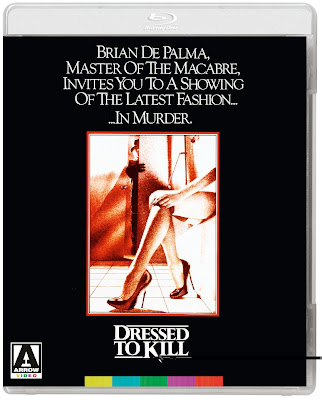 Extras are many and bountiful. Ported over from the old MGM release are the documentary ‘The Making of DRESSED TO KILL’, a featurette on how the film had to be changed to avoid an American X rating, and a comparison of the unrated, R (ie 18) rated and television versions of the film. Anyone who caught DRESSED TO KILL on its premiere screening on ITV in the 1980s will no doubt cringe at the memory of the awful TV version and it’s all here for you to feel horrified by all over again.
A short appreciation by Keith Gordon on the old disc has been left off to make way for a swathe of new material, including lengthy interviews with stars Angie Dickinson, Nancy Allen, and Keith Gordon. There’s also a new interview with producer George Litto. A piece from Pino Donaggio would have been nice but I could probably never have too many extras for this film. As usual we get trailers, a picture gallery, a reversible sleeve with new artwork and the original poster art, and a booklet with a new essay by Maitland McDonagh.
Arrow’s DRESSED TO KILL package is just splendid, and an essential purchase for fans of this gorgeously shot, melodramatic suspense thriller.

DRESSED TO KILL will be released on Blu-ray by Arrow Video on Monday 29th July 2013
Posted by John Llewellyn Probert at 6:43 am