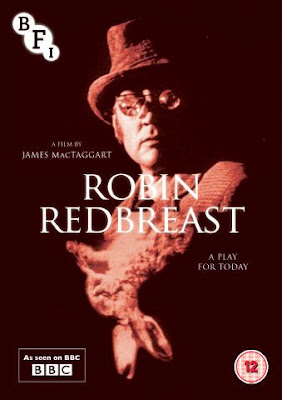 The 1970s were responsible for a number of memorably scary British television programmes.Some of these, including Nigel Kneale’s THE STONE TAPE (1972) and the GHOST STORIES FOR CHRISTMAS series, are well known and currently available on DVD. However, there are still many obscure and little heard of titles that have yet to secure any kind of DVD or Blu-ray release. The BFI is doing a fine job of rectifying the situation, and ROBIN REDBREAST, a folk horror tale from BBC1’s PLAY FOR TODAY series, is just such an example.
Posh television script editor Norah Palmer (Anna Cropper) suffers a bad relationship break-up and decides to move away from her city life and city friends, relocating to a refurbished farm house in the country. She find the locals eccentric but welcoming. These include Mr Fisher (Bernard Hepton) a keen amateur archaeologist in tweeds, and Mrs Vigo (Freda Bamford, who could have given Sheila Keith a run for her money in any Pete Walker picture but especially HOUSE OF WHIPCORD) who becomes Norah’s rather stern and scary housekeeper. During a walk in the woods one day she comes across young, toned and attractive Rob (Andrew Bradford) wearing little but a skimpy thong and practising karate with a handy tree stump. There are mice in the attic and it turns out Rob is the local pest controller. Once he's sorted out Norah’s mouse problem she invites him round for dinner and, after a series of peculiar coincidences including Rob receiving a blow to the head and Norah’s contraceptive device disappearing, they end up in bed together and Norah ends up pregnant. With her car failing to start and her phone out of order, it soon becomes apparent that the the locals aren’t willing to let Norah leave. Exactly why provides the satisfying and disturbing denouement and of course I’m not going to reveal it here. 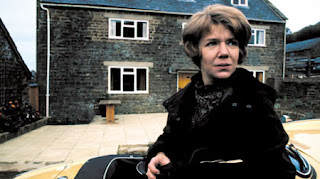 ROBIN REDBREAST is an interesting and disquieting folk horror piece from a time when television production was very different from the way it is now. BBC1’s PLAY FOR TODAY provided a platform for writers to have original one-off projects filmed. It ran from 1970 to 1984, producing over 300 pieces of original drama, and was eventually axed so the money could be spent on EASTENDERS instead. With that number of original plays to its name, it’s no surprise that every now and then PLAY FOR TODAY was going to touch on horror, and ROBIN REDBREAST was one of its earliest attempts. There are lots of things to commend it - a sharp script by John Bowen, and some excellent character performances, especially by Bernard Hepton and Freda Bamford. It’s bound to be a matter of opinion, but unfortunately I found Anna Cropper to be the least appealing and most annoying lead character in a period horror piece I think I have ever seen. Her performance as a shrill upper class TV script editor almost threatens to disrupt the mood of the piece, but luckily ROBIN REDBREAST is just a bit too good and a bit too weird for her to overbalance it entirely. 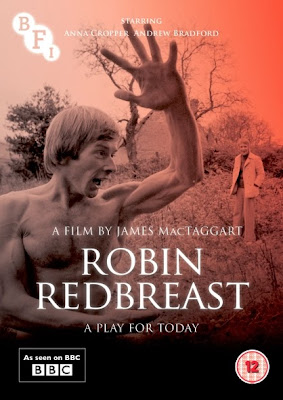 The play was originally broadcast in colour but, like so many productions from the time the original was wiped, leaving nothing but an archival 16mm black and white telerecording, which is what we are presented with here. As one might expect, the image is grainy and quite a bit fuzzy at times. It doesn’t spoil the story but now you know. Extras include a twelve minute interview with writer John Bowen, a 1937 short film, AROUND THE VILLAGE GREEN, illustrating the changing economic and social history of village life, and a booklet with essays on the programme, writer John Bowen, and director James MacTaggart.
Fans of early 1970s British horror will get the most out of ROBIN REDBREAST. It’s reminiscent of films like THE WICKER MAN and Nigel Kneale’s BEASTS TV episode BABY in its depiction of a chill, uncaring countryside where greater forces are at work than we dare to think about. It’s languished in the archives for far too long, and let’s hope there’s more of this sort of thing due for release soon.

ROBIN REDBREAST is due out from the BFI on DVD on
the 28th October, 2013
Posted by John Llewellyn Probert at 6:52 am