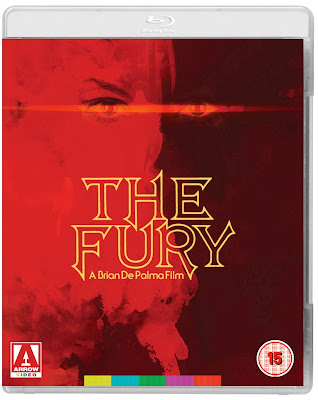 While on holiday in the middle east, Peter Sandza (Kirk Douglas) is witness to the kidnapping of his son Robin (Andrew Stevens) while his friend Ben Childress (John Cassavetes) looks on. It soon becomes apparent that Robin, who has psychic powers, has been abducted by a US government department run by Childress who are trying to turn young people with telekinetic powers into deadly weapons. While Sandza searches for his son, another young woman, Gillian (Amy Irving) realises she can causes her classmates noses to bleed with just a thought, and soon she becomes the target of the shady government agency as well. As Robin becomes more destructive and more insane as a result of incessant testing, the film reaches a climax at the isolated country house where he is being held prisoner. 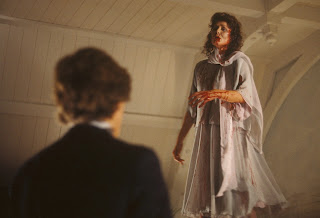 Sandwiched between CARRIE (1976) and DRESSED TO KILL (1980), THE FURY cannot help but come off as the least of de Palma’s three horror projects. There are moments of genius (Amy Irving’s flashback to Andrew Stevens’ pursuit), spectacle (the fairground scene), and gloriously operatic violence (Fiona Lewis’ demise is especially cruel and memorable). Somehow, however, these moments don’t make for an overly satisfying whole. The film begins with an action packed scene in an exotic locale, and whereas in a James Bond picture this sort of thing works, in a film like THE FURY it just feels as if we’ve walked in halfway through the story, and the lack of character development or identification prior to the mayhem makes what happens far less effective. There are far too many lengthy dialogue scenes featuring people sitting around tables, and no matter how de Palma moves his camera he can’t make any of them terribly interesting. The climactic killing of the evil villain by Amy Irving is quite spectacular, but it feels tacked on, as if the studio had told de Palma to ‘go back and film an ending to top CARRIE’. 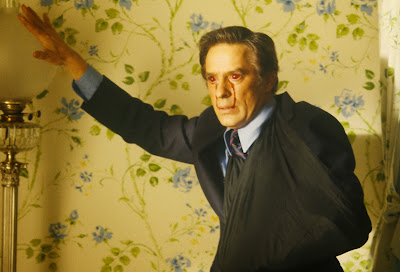 THE FURY isn’t a dead loss by any means, but it does have quite a few problems, Coming in the wake of THE OMEN and a host of other movies about evil children with remarkable powers, THE FURY keeps its scary (and increasingly insane) teenager out of the picture for most of the running time to concentrate on Kirk Douglas’ quest. While it’s always a pleasure to watch Mr Douglas work, the film really suffers from this being his story, and not that of Andrew Stevens’ character. 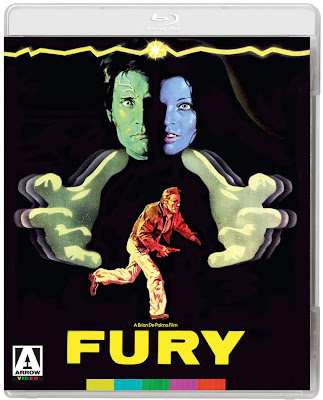 Arrow’s Blu-ray presentation of Brian de Palma’s THE FURY is second to none, offering a package that’s far superior to the Twilight Time Region A release that’s currently available stateside. As well as offering a gorgeous remastered print, the disc has a wealth of extras unavailable on other editions. First up is ‘Blood On The Lens’ - an interview with cinematographer Richard H Kline, in which he discusses what it was like to work with the director, and how he convinced de Palma to rely less on storyboards and try rehearsals instead. ‘Spinning Tales’ offers an interview with Fiona Lewis, star of quirky cult classics such as Ken Russell’s LISZTOMANIA, Andrew Sinclair’s BLUE BLOOD and , of course, Robert Fuest’s DR PHIBES RISES AGAIN. She talks about the filming of THE FURY, and in particular of one scene that was cut by the film-makers for being too extreme after she had filmed in 24 times and ended up black and blue as a result. Sam Irvin was an intern on THE FURY, and he’s interviewed about the film’s locations. Irvin’s short film DOUBLE NEGATIVE is also included on the disc. Described as ‘a valentine to de Palma’ it’s actually a lot of fun and well worth watching. I’d love to know if film producers Max and Milt (played by William Finley and Wayne Knight) were named after Amicus main men Max J Rosenberg and Milton Subotsky. Rounding out Arrow’s package are some original archive interviews from the time with de Palma, producer Frank Yablans, Amy Irving and Carrie Snodgress. There’s also a booklet with new writing on the film, and an interview with John Farris about his and de Palma’s unrealised film version of Alfred Bester’s The Demolished Man.

Arrow Films are releasing Brian de Palma's THE FURY on Region B Blu-ray on 28th October 2013
Posted by John Llewellyn Probert at 9:06 am