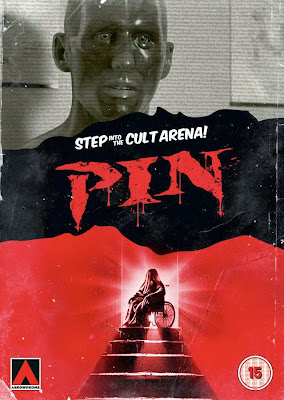 “Brother, sister, madness, sin. Now the terror can begin.” I still remember the tagline from Andrew Neiderman’s pulp horror novel of the early 1980s. That, and the fact that there was what looked like a half-dissected corpse on the cover. ‘I wonder if this latest Arrowdrome release is a film version of that book?’ I mused half-jokingly when I received word of this, and goodness me - it is! Made in 1988 and seemingly dropped immediately into depths so obscure even I had never heard of it, Sandor Stern’s PIN doesn’t exactly exhibit much directorial flair, but the whacky plot, played quite amazingly straight, more than makes up for it.
Leon and Ursula Linden are two weird siblings who live with their cleaning-obsessed mother and potty doctor father in a great big house. Dad (Terry O’Quinn) has a life-sized anatomical dummy in his doctor’s office that he uses ‘to explain things to patients with’. The dummy has been named Pin by the children, has no skin, a moveable head and, in one scene involving a nurse that wouldn’t be out of place in a Joe D’Amato or John Waters picture, we discover that he is anatomically correct, er, downstairs as well. I have no idea what you would use such a dummy for in a doctor’s office, and Dr Linden’s actual specialty is somewhat glossed over, although at one point in the film he does perform an abortion on his own daughter, so perhaps his area of expertise is lack of ethics. And where would we trash film aficionados be without that particular discipline? 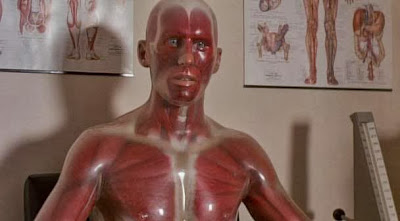 When they’re approaching puberty, Doctor Linden uses Pin to explain the facts of life to them via a ventriloquist act so completely barmy this one scene alone makes PIN worth watching. Following this the two kids retire to their room where little Ursula reads girlie mags while little Leon contemplates a wind up musical ballerina. I didn’t say the facts of life bit was the only barmy scene, did I?
The children grow up, Ursula gets into trouble but Dad sorts it out. Leon becomes more and more attached to Pin. When Mum and Dad are killed in a car crash Leon rescues Pin from where he had been sitting in the back seat (don’t ask), takes him home and dresses him in his father’s clothes. Ursula tries to lead a sane life but when Auntie Dorothy comes and incurs Pin’s dislike (according to Leon) she becomes Pin’s latest victim. 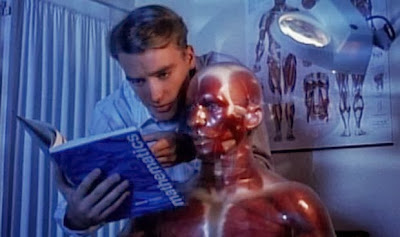 Despite its flat and uninspired 1980s TV movie-like direction, PIN is so enjoyably crackers that anyone who likes outrageous nonsense will be more than willing to forgive the absence of style. The acting isn’t bad either, with a standout performance from David Hewlett as the increasingly potty Leon. It was produced by Pierre David and at one point Leon takes a girl to the cinema to watch that most romantic of movies, David Cronenberg’s SCANNERS (also produced by David). 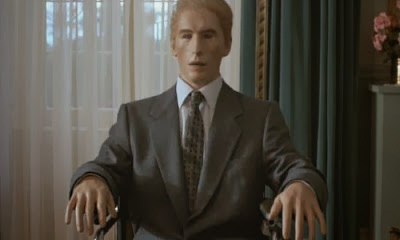 PIN is obscure, completely bonkers, and far better than you might expect it to be. Definitely in the tradition of weird dummy movies like Richard Attenborough’s MAGIC, Lindsay Shonteff’s DEVIL DOLL and, of course, Ealing’s DEAD OF NIGHT, if you liked any of those you’ll probably get a kick out of PIN as well.

PIN is an Arrowdrome release on DVD and is out now
Posted by John Llewellyn Probert at 9:44 am