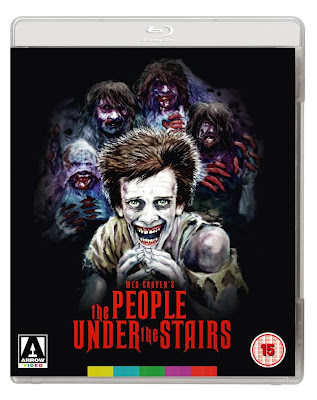 Out of all his contemporaries (Cronenberg, Carpenter, Romero, et al) Wes Craven is the director with by far the most chequered career. For every HILLS HAVE EYES, NIGHTMARE ON ELM STREET or SCREAM there’s been some right ropey old rubbish like CHILLER, DEADLY FRIEND and most recently the frighteningly dreadful MY SOUL TO TAKE (2010). THE PEOPLE UNDER THE STAIRS (1991) isn’t terrible Craven, but it’s nowhere near as good as the high points in his career either. Arrow Films have just released it on a lovely Blu-ray edition with plenty of extras, so if you’re a fan of this, now’s the time to pick it up.
Poindexter “Fool” Williams (Brandon Adams) is a young lad who lives with his family in a ghetto from which they are soon to be evicted by evil landlords the Robesons (Everett McGill and Wendy Robie). Encouraged by the rumour that the Robesons have a large cache of gold hidden somewhere about their crumbling, rambling property Leroy (Ving Rhames) convinces Fool to aid him and his equally dodgy chum Spenser (Jeremy Roberts) in breaking into the place and searching for the loot. Once inside Leroy and Spencer meet grisly ends and Fool discovers that the Robesons have a cellarful of ‘adopted’ children, the latest of which, Alice (A J Langer), has yet to be relegated to the place under the stairs for misbehaving. 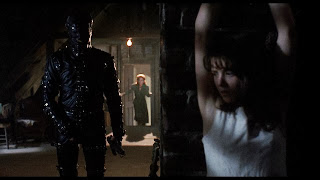 A curious mixture of Craven’s recurrent theme of horror being just round the corner in your own neighbourhood and some over the top knockabout comedy, PEOPLE UNDER THE STAIRS feels less like a horror film and more like a kids’ adventure movie into which some gore scenes have been added. I first saw it on its original cinema release and it didn’t work for me then. Twenty two years hasn’t changed my opinion, but I do know there are a lot of people out there who love this film so I shall leave it to them to extol its virtues. 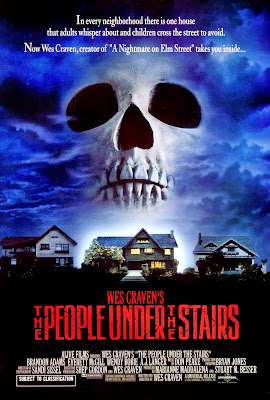 Arrow have done their usual tip top job with the Blu-ray transfer and there is a decent collection of extras as well. First up is an audio commentary track from star Brandon Adams moderated by Calum Waddell. Adams is chatty and the track is worth a listen. Wes Craven talks for about twenty five minutes on the making of the movie in Fear, Freud and Class Warfare. In Behind Closed Doors actress A J Langer reflects on the making of the film and in Silent But Deadly actor Sean Whalen does the same. The final featurette on the disc is Under the Floorboards, in which screenwriter Jeffrey Reddick (creator of the FINAL DESTINATION series of films) talks about his changing attitudes to THE PEOPLE UNDER THE STAIRS as he has grown up, and the movie’s influence on horror cinema. There’s also a trailer and some original cover art to complete the package.

Posted by John Llewellyn Probert at 7:17 am