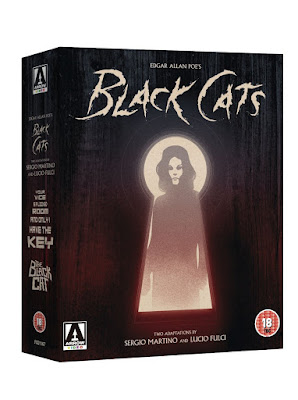 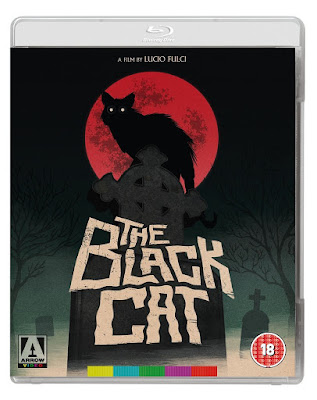 Here we go with the second in Arrow’s Black Cat Box Set of Italian films inspired by Edgar Allan Poe’s classic tale of horror. This time it’s the turn of Lucio Fulci to show us what he can do with the story, dragging regular director of photography Sergio Salvati and actors Al ‘I’m in everything’ Cliver and Daniela ‘I bet I die horribly in this’ Doria along with the rest of his gang to a sleepy English village to make his own version of THE BLACK CAT.

So what’s it all about? Ah, well as with so much Italian horror of the period THE BLACK CAT isn’t terribly easy to summarise, but basically bonkers Patrick Magee uses his powerful mind to take over a cat who does some murders for him for the most ridiculous of reasons (‘Don’t try to understand,’ says Magee at one point, and we should respect that) and then rebels against its master, particularly after he tries to hang it. It’s actually not a bad film at all with that curious Euro-horror view of England as a place of open tombs in the middle of fields and fog-strewn graveyards (beautifully lit by the way).

There’s some marvellous dialogue (“Could be worse,” says Detective David Warbeck to Sergeant Al at one point, “It could be chicken rustling”), and Daniela Doria does indeed once again end up naked and horribly dead, this time by suffocation and then being eaten by rats.  Most amazing of all is Fulci’s direction of the cat which is quite incredibly good for a low budget film, especially if anyone remembers what a balls-up Denis Heroux did with multiple moggies in THE UNCANNY. You will believe a cat can unlock a door! Pino Donaggio’s music score is great, and reminiscent of the other impressive work he was doing at the time with conductor Natale Massara for THE HOWLING & DRESSED TO KILL.

Arrow’s Blu-ray presentation is glorious - a huge improvement on the previous Shameless DVD release which was itself a revelation to those of us who had only previously seen THE BLACK CAT in its pan-and-scan VTC VHS tape incarnation which was all close-ups of people’s noses and scenes where you had absolutely no idea what was going on. The image here is just perfect, and you get both Italian and English language soundtrack options.

Stephen Thrower leads off with the extras, giving us an informative talking head piece on the making of the movie, how it fits into Fulci’s filmography, and some useful information on the personnel involved. We stick with Mr Thrower for ‘In the Paw Prints of the Black Cat’ where he visits some of the locations used in the film as they are today. There’s also a new interview with cast member Dagmar Lassandar and an archive interview with the late David Warbeck. You also get an audio commentary from Chris Alexander, a trailer and a reversible sleeve. A lovely presentation of this unjustly neglected Fulci movie from Arrow.