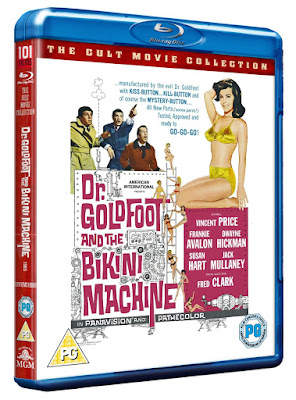 "Exactly what you'd expect from a title like that"

Just after GOLDFINGER (1964) but way before AUSTIN POWERS: GOLDMEMBER there was this cheerful children’s adventure picture from the AIP stable, now given a new UK Blu-ray release courtesy of 101 Films.

The villainous Dr Goldfoot (Vincent Price - hooray!) plans to become incredibly rich through a fiendish plan only possible in 1960s spy spoofs. He has created an army of beautiful, golden bikini-clad robots whom he intends to marry off to the world’s richest men. On his case quite by accident are the men from SIC (the Security Intelligence Council). Or at least Craig Gamble (Frankie Avalon) is. His boss and father (Fred Clark) doesn’t believe him and is too busy banging his head on lampshades and falling out of the window because it’s that kind of film.

Robot Diane (Susan Hart) seduces millionaire Todd Armstrong (Dwayne Hickman) and together Craig and Todd track the shenanigans to Dr Goldfoot’s mansion. Imprisoned and taken to the dungeons, they encounter a number of ‘star’ cameos whom nobody these days is likely to recognise, before Todd ends up in the climax to AIP’s PIT & THE PENDULUM - complete with recycled stock footage! You’d expect it to end there but instead we get a jolly good natured car / trolleycar / motorcycle / etc etc chase through the streets of San Francisco, with Price dressed splendidly in a big floppy hat, before we get to the end, which was probably funny at the time but reminded me of Mario Bava’s LISA & THE DEVIL.

DR GOLDFOOT & THE BIKINI MACHINE is very much of its time, and is mainly going to be of interest to Vincent Price fans (and he’s simply marvellous in it) and AIP scholars, who will relish the bits of stock footage that pop up, and the production design of Price’s castle (from Corman/Poe regular Daniel Haller). That said, it’s actually rather charming in a kids’ TV kind of way. The entire thing is daft and the comedy never gets above RENTAGHOST level, but the ninety minutes breeze past more quickly than you might expect.

101’s transfer offers the film in its original 2.35:1 aspect ratio despite what it says on the back. The image does look slightly stretched (as does the Kino Lorber Region A release of this) but it’s not really bad enough to impair your viewing pleasure. There are no extras, which is a shame because the Kino release has a David del Valle commentary track that presumably couldn’t be licensed.

Undoubtedly a strong influence on the Mike Myers AUSTIN POWERS movies, if you’re a fan of 1960s US drive-in pictures, or just love Vincent Price (and who doesn’t?) DR GOLDFOOT & THE BIKINI MACHINE is worth a look to see a different side of the master of horror.

AIP's DR GOLDFOOT & THE BIKINI MACHINE was released on UK Blu-ray and DVD by 101 Films on 25th January 2016
Posted by John Llewellyn Probert at 9:13 am