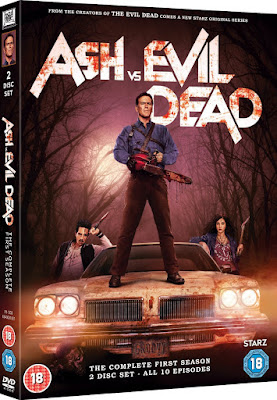 And yes indeed it is, as the continuation to Sam Raimi’s classic EVIL DEAD trilogy, with Bruce Campbell all present and correct as “hero” Ash, gets a UK DVD release courtesy of 20th Century Fox.
It’s been thirty years since the events of ARMY OF DARKNESS, and never mind which ending to that film you saw or prefer (the supermarket one or the post apocalypse one) Ash is now working at the US equivalent of B&Q and living in an Airstream trailer in what might just be a clever reference to the first film’s HILLS HAVE EYES gag (Sam Raimi and Wes Craven used to swap references in each others’ movies). 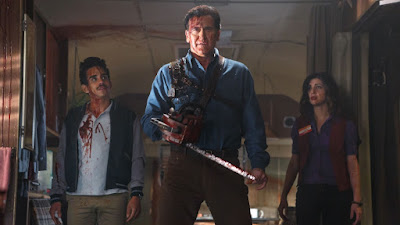 Ash is still just as stupid, though, and during an evening smoking weed with one of the local ladies of the night he reads from the Necronomicon Ex Mortis (which he’s kept in a trunk in his caravan for who knows what reason, but he’s certainly that kind of guy). Needless to say all hell starts to break loose, affecting the lives of not just Ash but coworkers Pablo (Ray Santiago) and Kelly (Dana DeLorenzo). The series follows their attempts to put hell back where it came from, with plenty of gore and splat ensuing. 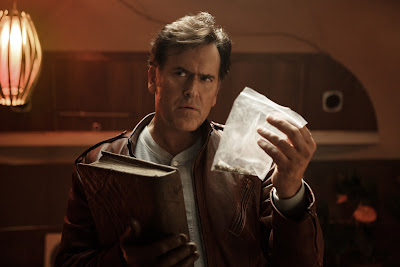 Oh yes, ASH VS EVIL DEAD doesn’t have an 18 certificate for nothing. Original Renaissance Films producers Rob Tapert and Sam Raimi (good to see their names on something again, by the way) know exactly what EVIL DEAD fans want and it’s a delight to say that this series delivers. Raimi himself directs the pilot, allowing him to indulge in a bit of knockabout three stooges stuff before the real horrors begin.

It’s an excellent pilot episode, reassuring fans that, if anything, this show promises to be even more kinetic and even crazier than the films. The comedy settles down from the physical to just wisecracking dialogue (which is often very funny and well timed by the leads) in the next two episodes, both helmed by SOLOMON KANE director Michael J Bassett. I loved KANE and I loved these episodes, which deliver just the right amount of plot (including some delicious bookshop stuff in episode three) with action and gore in their thirty minute running time. Joseph LoDuca, the original movie composer, is back for this show as well, and if you’re a horror movie music nut you’ll spot plenty or references and developments of his themes from all three EVIL DEAD pictures. 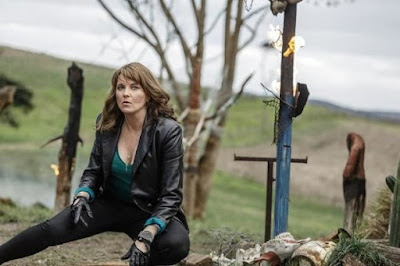 Fox’s double disc DVD set contains all ten half hour episodes (the pilot is a bit longer), with commentaries on every one. There are also two Ash featurettes and another on How to Kill a Deadite.
I’m not going to say any more as hopefully you should know if you want to check this one out now, suffice to say that everything you could want from an EVIL DEAD: THIRTY YEARS LATER is present and correct here. Bruce Campbell is great, portraying Ash as the well-loved mixture of charm, wit, selfishness and stupidity that we all love. He has one hand. It fits onto a chainsaw while the other wields his boom stick. It’s all great. I loved it. There’s going to be a second series. Life is good.

The first season of ASH VS EVIL DEAD is being released on UK DVD by Twentieth Century Fox on Monday 19th September
Posted by John Llewellyn Probert at 8:52 am