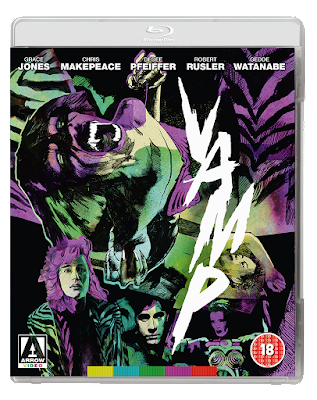 Getting a new Blu-ray and DVD release from Arrow this month is Richard Wenk’s 1986 comedy horror picture that originally saw release on VHS in the UK on the Entertainment in Video label.

Keith (Chris Makepiece) and AJ (Robert Rusler) are two friends trying to get into the college fraternity of their choice. In order to do so they make a pledge that they can get a stripper for the fraternity’s party. Off they go with rich ‘friend’ Duncan (Gedde Watanabe trying his best to be the 1980s teen movie equivalent of Charles Hawtrey) to the seedy side of the closest city.

They end up at the After Dark club, where AJ falls victim to stripper vampire queen Katrina (Grace Jones sans dialogue - presumably the budget didn’t stretch that far). With only waitress Dedee Pfeiffer (sister of Michelle) as a possible ally, Keith has to fight off not just all the dancers at the club and the other vampires that live in the area, but a gang of albinos led by Billy Drago as well.

The central idea of VAMP is worthy of an EC comic strip (like Joe Orlando’s Midnight Mess) or an R Chetwynd-Hayes story (hence the reference to THE MONSTER CLUB at the top there). The film boasts some endearing acting from Makepiece and Rusler in their scenes together and some decent post THE HOWLING Greg Cannom makeup effects (it looks as if he used the same contact lenses and basic facial appliances he used on that picture as Rob Bottin’s assistant).

This, plus Grace Jones as the scariest stripper (and the most believable ancient Egyptian vampire) ever, should have meant a movie as entertaining and scary as Joe Dante’s earlier werewolf picture. But somehow it just doesn’t work. Whether that’s due to a sluggish middle act, the American horror movie tradition of having incredibly boring strip routines, some bits of stilted dialogue, or just a general lack of urgency about the whole thing it’s hard to tell. I’ve seen VAMP a couple of times now and have always wanted to like it, but after a very promising start it seems to lose its way. The constant use of pink and green lighting is interesting but after a bit it gets rather wearing on the eye as well.

Arrow’s new ‘Special Edition’ release includes a new 45 minute making of that includes interviews with writer-director Richard Wenk and stars Makepiece, Rusler, Pfeiffer, Watanabe and Drago, a blooper reel (from what looks like blurry VHS footage), some rehearsal stuff with Grace Jones, and a daft short film about Dracula Coming to New York that makes the comedy of VAMP look restrained. You also get an image gallery, a reversible sleeve, and the first pressing will contain a booklet with new writing on the film by Cullen Gallagher.

Richard Wenk's VAMP is getting a Blu-ray and DVD release from Arrow on Monday 3rd October 2016
Posted by John Llewellyn Probert at 8:33 am