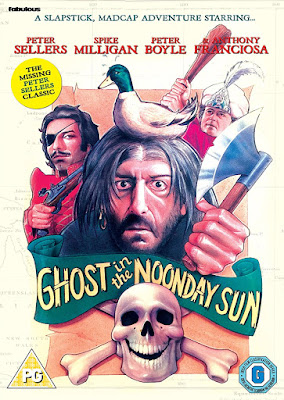 “I Did Not Laugh Once”

The DVD cover up there claims that this is “The Missing Peter Sellers Classic”. It is not. It is not a classic of any kind. Instead, it is a film that has only been heard of by a few and seen by even fewer. In fact this release by Fabulous Films is GHOST IN THE NOONDAY SUN’s worldwide DVD premiere.
There is a very good reason for this.
It is terrible.
Terrible. 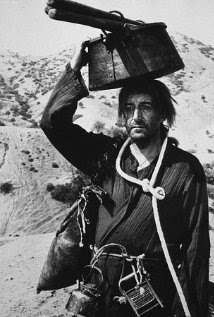 Less a comedy pirate movie and more a shambles of lazy non-existent writing, appalling overacting, and utter lack of narrative cohesion aided by random bits of stock footage, the term sheer desperation came to mind many times as I watched this sad and sorry example of British comedy.
Do you want to know the plot?
Why?
Ok here goes. Peter Sellers (in probably his worst ever performance) plays ship’s cook Dick Scratcher (oh the hilarity) who kills pirate captain Ras Mohammed only to discover the man’s pirate map turns invisible upon death.  He therefore needs the captain’s ghost to tell him where it is, but only Spike Milligan (going full Q6,7,8,9 and beyond before his surreal British comedy show had been renewed after a six year hiatus and obviously itching to do some barking mad performance art / daftness) can channel the ghost. 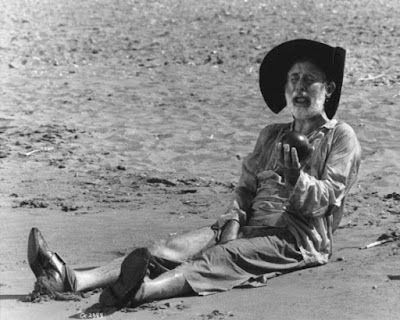 Add in an opening half (!) of random nonsense involving appalling jokes, a giant plastic duck, and an opening theme song so sluggish and dull one can only assume it was written for something else, rejected, and then had ‘pirate words’ stuck on it for this load of rubbish and hopefully I’m conveying some of what it was like to actually watch this. The only actor who emerges with any dignity is Anthony TENEBRAE Franciosa, who actually makes a very good and endearing pirate hero, even when he’s wearing a giant plastic head and wandering around a burial ground.
All the above may have encouraged you to watch this embarrassing pile of redundant cinema. If so, then on your own head be it.There are no extras because Good God why would there be any? Instead, let me finish up with a few quotes from Fabulous Films’ own press release:

“It was an absolute living nightmare”
Antony Rufus Isaacs, producer.

“It’s the only film I can ever remember where the producers got sacked after the first week by the star”
Robin Dalton, agent.

“It turned out to be the biggest disaster of my life”
Peter Medak, director.

Ah yes, Peter Medak, of THE CHANGELING, THE KRAYS, LET HIM HAVE IT, and...er...SPECIES 2. Blame him for this less than the movie’s star. Peter Sellers apparently tried to have the film shut down, faked a heart attack so he could have tea with Princess Margaret, went water ski-ing instead of turning up for filming , and got Medak replaced by Spike Milligan (!) as director for a couple of bits that are so awful it’s obvious.
Can I write any more about this? No I can’t. The disc is going in the bin & I’m cracking open the Shiraz. In fact I already have. Hic.

Posted by John Llewellyn Probert at 9:30 am

Email ThisBlogThis!Share to TwitterShare to FacebookShare to Pinterest
Labels: 1970s, Films You Should Never See, Trapped in the Room With It