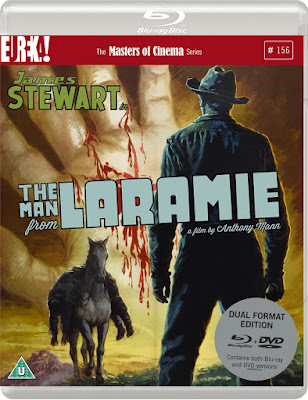 Well, not exactly, but Anthony Mann’s final collaboration with James Stewart has been described as ‘a psychological revenge drama of Shakespearean proportions’ and there’s certainly a touch of King Lear about it. It’s getting a sparkling new dual format DVD & Blu-ray release from Eureka that’s definitely worth a look. 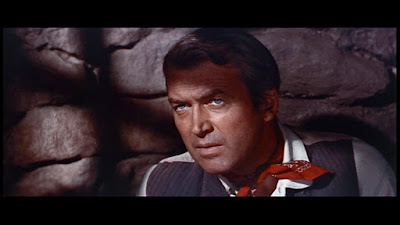 Will Lockhart (James Stewart) arrives in town looking for the man who murdered his brother. He gets into trouble with local cattle baron Alec Waggoman (Donald Crisp), who is losing his sight and is plagued by dreams of a lean figure murdering his sadistic son Dave (Alex Nicol). Ranch foreman Vic (Arthur Kennedy) has been promised half of Waggoman’s estate when he dies but Waggoman is notorious for changing his mind. Meanwhile, someone is selling rifles to the local Apache population who perform regular raids on US cavalrymen, burning them alive. 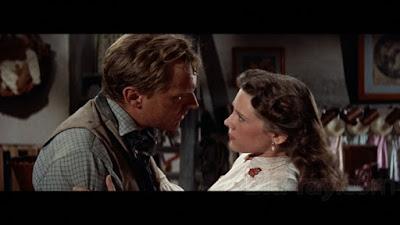 More a melodrama played out against the landscape of New Mexico than what one might consider a typical Western of goodies against baddies with a shoot out at the end, THE MAN FROM LARAMIE boasts a well thought out script and an excellent, measured central performance from James Stewart ably assisted by Arthur Kennedy. The other star here is Anthony Mann, who really knows how to use the Cinemascope frame (2.55:1) to show off the landscape to its best advantage, as well as composing shots that would have been completely ruined in TV pan and scan showings.

Eureka’s disc contains a new, specially recorded commentary track by film critic Adrian Martin and an informative talking head piece by Kim Newman. You also get 2.0 and 5.1 sound options (the 5.1 is just fine) and a booklet on the film with new writing and an Anthony Mann interview. 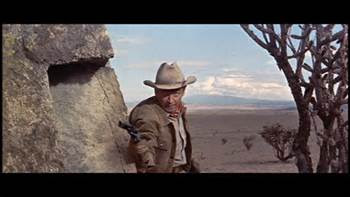 There’s a tendency these days to dismiss Westerns of the 1950s and earlier and instead concentrate on the works of Sergio Leone, Sam Peckinpah and the movies that came after theirs. It’s understandable because those directors have been so lauded, often at the expense of their predecessors. To do so, however, is to render the works of Anthony Mann and others a serious disservice. If, like me, you are such an offender then there is no better place to begin making amends than with Eureka’s THE MAN FROM LARAMIE Blu-ray.

Anthony Mann's THE MAN FROM LARAMIE is out in a dual format Blu-ray and DVD edition from Eureka from Monday 5th December 2016
Posted by John Llewellyn Probert at 5:17 pm