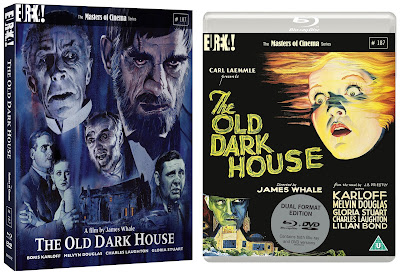 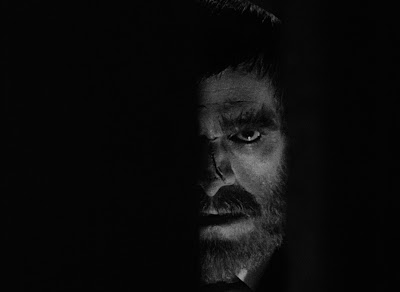 Lost in Wales in the midst of a terrible storm / normal Welsh weather, two groups of travellers find themselves overly challenged by the mud-choked road (most likely the A470) and end up taking refuge at the titular mansion where they encounter the bizarre collection of characters who live there, ranging from mute butler Morgan (Boris Karloff) to gin-loving potato enthusiast Horace Femm (Ernest Thesiger). 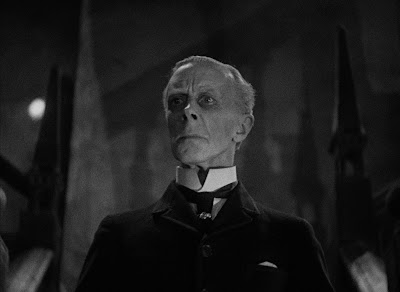 The rest of the Femm family are, if anything, even more strange than Horace. The head of the household is an old lady with a beard (Elspeth Dudgeon, but billed as John) while mad Saul (Brember Wills) is a pyromaniac. Will Gloria Stuart survive so her heart can go on (with the rest of her) & survive a trip on James Cameron's TITANIC? Will Melvyn Douglas escape to eventually end up in John Irvin's GHOST STORY? And how many potatoes will actually be consumed at dinner? 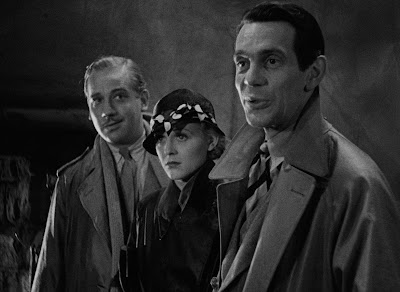 An inspiration behind pretty much every movie , TV show and newspaper cartoon of its kind that followed (THE ADDAMS FAMILY owes this a huge debt), THE OLD DARK HOUSE crackles along as a superb mixture of horror and eccentric humour. The opening half hour is probably the best, and the movie definitely loses something when Ernest Thesiger and his amazing nose aren't on screen. Also in the cast are Charles Laughton as a self-made man quoting lines taken directly from Priestley's novel and Eva Moore as Rebeca Femm - a more sinister, more restrained and far more effective version of the mad old lady character that would be essayed by Una O'Connor in 1935's THE BRIDE OF FRANKENSTEIN. 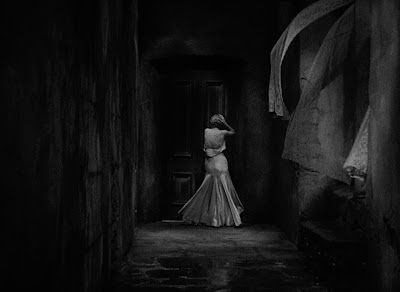 It's all top quality stuff and every horror fan (in fact every film fan) should watch it at least once. Eureka's 4k transfer (actually the same that's on the US Region A Cohen Media Group disc) is as sparkling as Universal have made their 1931 DRACULA and FRANKENSTEIN look on Blu-ray. 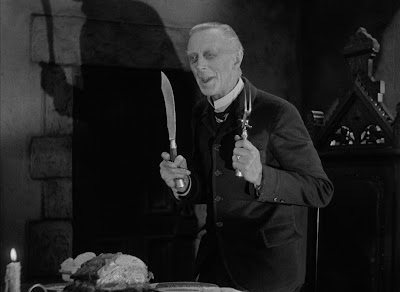 Eureka have gone the extra mile with the special features,  making this the disc to own over the Region A. They've ported over the entertaining Stephen Jones and Kim Newman commentary track from the old Network DVD, and you also get two audio commentaries ported over from the old US Kino DVD - a Gloria Stuart commentary track and another by James Whale biographer James Curtis. 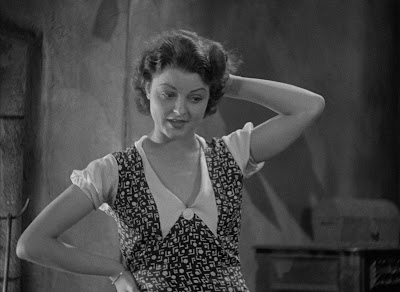 A brand new extra, and a highlight of the disc, is Meet the Femms -  a fantastically informative and entertaining video essay by critic and film-maker David Cairns which lasts about 40 minutes and is well worth a watch. Cairns even manages to include a plug for giant frog 3D horror picture THE MAZE (1953) so he's all right by me. 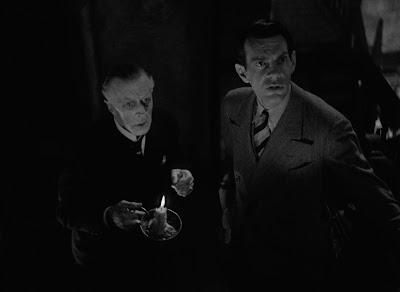 There's also a conversation with Sara Karloff entitled Daughter of Frankenstein and an archival interview with director Curtis Harrington detailing his quite amazing efforts to preserve the film from not just obscurity but from being a 'lost' film. Both of those can also be found on the Region A Blu-ray but what isn't is the 2018 UK re-release trailer. 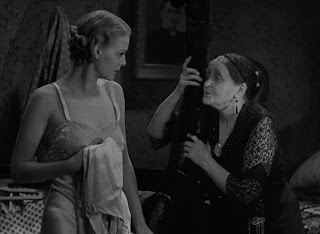 Finally you get a booklet with an essay by Philip Kemp that told me things I didn't know (especially about J B Priestley) and some lovely Graham Humphreys artwork. 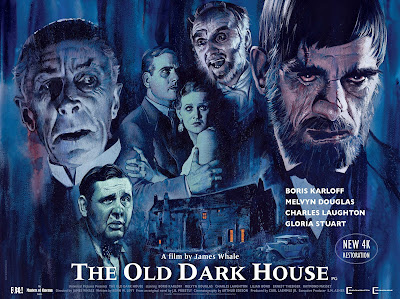 James Whale's THE OLD DARK HOUSE is out from Eureka in a splendid dual format package from Eureka on 21st May 2018.

The new transfer is also currently doing the rounds at selected UK cinemas.
Posted by John Llewellyn Probert at 8:56 am