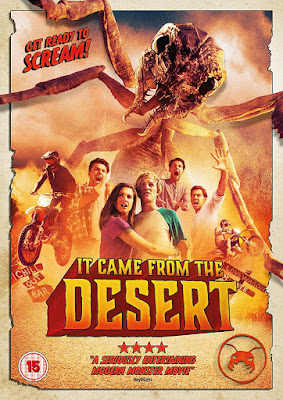 After having its UK premiere at last October's Frightfest, Thunderbird Releasing are bringing out this cheery low budget monster movie on UK DVD. 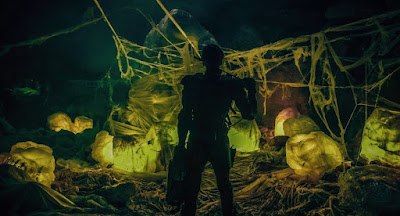 It's based on a 1980s video game, apparently, but if you don't remember it don't worry - hang around for the end credits and you'll get an entertaining run through of what the game was like in all its pixellated, blipping and burping glory.

We're in a desert somewhere in America (but actually Spain which is somehow appropriate). Something has gone wrong with project T.H.E.M (aha!). "We combined alien DNA, ant DNA and tarantula DNA and blew them up to massive size for the good of mankind" says scientist Dr Renard (Mark Arnold). There we are, then.

And of course the ants have escaped, killed everyone in the research complex, and are now looking for a source of ethanol so they can breed. Cue a party in the desert attended by the usual collection of teens. Biker boy Lukas (Alex Mills) and his mechanic brother Brian (Harry Lister Smith) wander off and find the complex. Video game style they also find weapons, armour and motorbikes to help them defeat the giant ant horde.

An affectionate and good-natured giant insects on the loose movie, IT CAME FROM THE DESERT proudly wears its influences on its sleeve. One of the first things we see is Doug McClure's name on a movie poster (for AT THE EARTH'S CORE) and there are plenty of references to films we all know and love without the practice ever becoming nudging and annoying.

The actors are likeable even though some of them are likely 'starting out' (to be charitable) and the special effects are of SyFy channel CGI quality, which means they're passable but in this case the film is fun enough that it doesn't matter.

Extras are just a VFX bit and a trailer, but who cares in a film that contains a scene where a giant ant bangs his head and then tells his colleague to stop laughing at him. Is this the first film ever to feature ant subtitles? Or indeed insect subtitles of any kind? Recommended for giant ant fans everywhere.

IT CAME FROM THE DESERT is out on UK DVD from Thunderbird on Monday 25th June 2018
Posted by John Llewellyn Probert at 8:11 pm