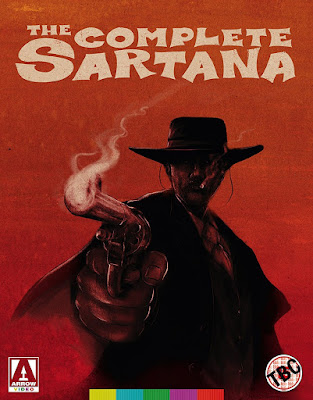 "Or...If you Meet Sartana, the Angel of Death, Light the Fuse, Pray for Death, Trade Your Gun For A Coffin, and Have a Good Funeral...Sartana Will Pay!"

Oh yes indeed - Spaghetti Western fans rejoice! For here we have, presented beautifully by Arrow Films for your entertainment, the five movies that make up the 'official' series of Sartana films made between 1968 and 1970. Let's dig in: 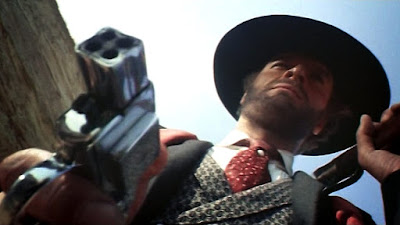 The first in the series, and the only one directed by Gianfranco Parolini ("Frank Kramer"), who after this went on to make the great SABATA trilogy with Lee Van Cleef and Yul Brynner. An enormous box of gold is stolen, but when it's opened there are rocks instead of the loot, which pretty much everyone in the cast wants, including William Berger, Klaus Kinski and a host of others. Gianni Garko plays Sartana, our Clint Eastwood wannabe title character who has a better costume (I think) but nowhere near the charisma. It's still fun watching him getting embroiled in a plot that becomes so complex by the end you'll wonder if it's possible for anyone left alive to double cross anyone else. For the second or third time. 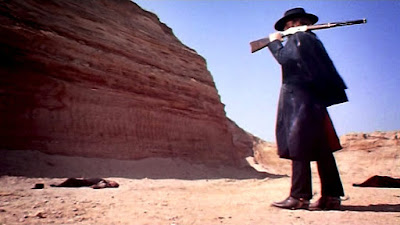 Extras include a commentary track by Mike Siegel, a new 22 minute interview with the director, and a useful and very well put together visual essay on the principle cast members of the series.

Giuliano Carnimeo ("Anthomy Ascott") takes over directing chores for this and the other films in the series. The second Sartana film boasts such colourful character names as Slim Shotgun, Tracy Three Aces, Shadow, Buddy Bill, Butch Dynamite and Hot Dead (played by Klaus Kinski) and takes place in the towns of Hot Iron and Poker Falls. Everything is, of course, played completely straight, and this, combined with signs with mis-spellings and grammatical oddities lend a slightly Zucker brothers air to the proceedings.

Someone pretends to be Sartana and robs a bank. Every bounty hunter in Spaghetti Western land wants the $10 000 offered for Sartana's head. Will he prove his innocence? Will the denouement be more complicated than it really needs to be? Will Buddy Bill turn out to be the Artful Dodger 30 years on and badly in need of a shave?
Extras include an interview with Italian screenwriting god Ernesto Gastaldi (who wrote this and one other in the series). There's also a commentary track by C Courtney Joiner and Henry Parke and a 24 minute interview with cast member and stuntman Sal Borghese. 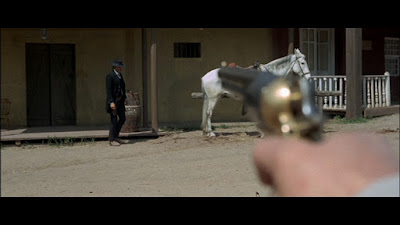 George Hilton plays Sartana in this one & he's joined by fellow giallo standby Erika Blanc. It's all to do with stealing gold again, and this time Sartana, another bounty hunter called Sabata (!) in the Italian version (Charles Southwood), evil town boss Spencer (Piero Lulli) and the usual gang of Mexicans this timer led by Mantas (Nello Pazzafini) are after it. This film's gimmicks for Sartana are the number of places he finds to conceal his gun, and the fact that he has a penchant for boiled eggs. Neither as satisfying plotwise as the first nor as fun as the second, SARTANA'S HERE - TRADE YOUR GUN FOR A COFFIN is still a reasonable Sunday afternoon timewaster for spaghetti western aficionados. 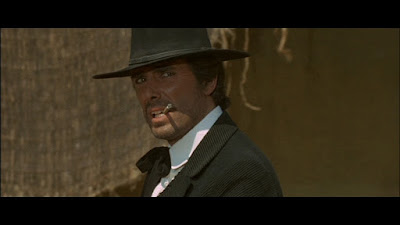 Gianni Garko is back in the title role, and this time he's helping Daniela Giordano avenge the death of her uncle and preventing her from selling her 'worthless' land to the villains who know there's gold on it. Spanish horror star Helga Line is also in this one, and it has the best music score of the lot courtesy of Bruno Nicolai. In fact, everyone seems to have upped their game with this one, so that surprisingly the fourth Sartana film is easily the best of the lot. There's far less talk, a lot more action, plenty of creative fight choreography, and the plot just belts along. If you're planning to introduce someone to the Sartana series this might well be the one to start with.

Extras on this disc include a commentary track by C Courtney Joyner and Henry Peake, and an interview with screenwriter and stuntman Roberto Dell'Acqua 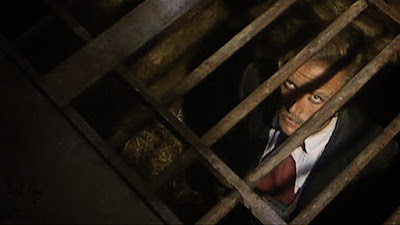 If you've been watching all the Sartana films so far or if you're just a fan of 1970s European exploitation films in general you'll spot a lot of familiar faces in the fifth Sartana film. Gianni Garko takes on the title role for the final time, getting himself locked up in prison so he can break out a chap called Grand Full who knows where half a million dollars in gold (aha!) has been stashed - in the very Spaghetti Western-sounding town of Mansfield.

With a weird clockwork robot called Alfie and possibly my favourite climax to a spaghetti western ever (it's so ludicrous it really is wonderful) LIGHT THE FUSE...SARTANA IS COMING is a fine way to end the series. It's not quite as good as the previous entry but both these final films are tremendously entertaining, and we get another Bruno Nicolai score to round things off nicely.
Extras include more Ernesto Gastaldi, more Sal Borghese and archive interviews with Gianni Garko and Giuliano Carnimeo.

Posted by John Llewellyn Probert at 9:09 am