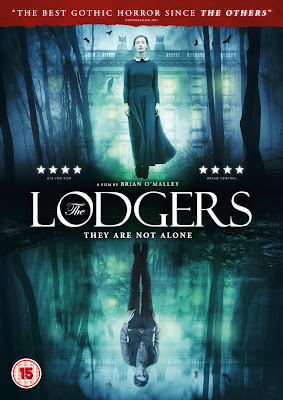 One of the best horror films from last year's festival circuit gets a UK DVD release courtesy of Thunderbird.

Rural Ireland in the 1920s. Rachel (Charlotte Vega) and Edward (Bill Milner) are fraternal twins who live in a remote, crumbling mansion. They share the house with things unseen, who have imposed three rules on them: that they must never open the doors to strangers, that they must never leave each other completely alone, and that they must be in their bedrooms by midnight.

On their eighteenth birthday their world changes with the arrival in the nearby village of Sean (Eugene Simon) a war veteran, who sparks a sexual awakening in Rachel. What he doesn't realise is that Rachel and her brother are the latest to suffer a curse that is ultimately going to impact on him as well.

A fine gothic ghost story with a terrific sense of atmosphere, THE LODGERS benefits from excellent performances, beautiful and often clever photography, an intelligent script (by David Turpin) and assured direction by Brian O'Malley, who admits in the extras his ambition had always been to film a gothic ghost story.

THE LODGERS received its UK premiere at Abertoir last November, & Mrs Probert & I were lucky enough to get the director on his own afterwards for a lengthy chat. Mr O'Malley proved to be an extremely affable and knowledgeable individual who cited Jack Clayton's THE INNOCENTS (1961), Alejandro Amenabar's THE OTHERS (2001) and J A Bayona's THE ORPHANAGE (2007) as influences on his own picture.

He also explained that both he and screenwriter David Turpin had wanted to write a ghost story set in that period that boasted a female lead, as so many of the stories from that period by writers such as M R James always featured men. He also told me the prosthetic limb we see in the movie was authentic for the time and that yes, all of those marvellous widescreen compositions we see in the picture were deliberately constructed to look like classical paintings. It was a delight to talk to someone so enthusiastic for the ghost story genre and I'll be interested to see what Brian O'Malley does next.

Thunderbird's disc also contains a 22 minute making of, deleted scenes and a trailer. THE LODGERS is well worth a watch if you're a fan of subtle, understated but deliciously creative ghost stories.

Brian O'Malley's THE LODGERS is out on DVD from Thunderbird Releasing on Monday 25th June 2018
Posted by John Llewellyn Probert at 8:46 am