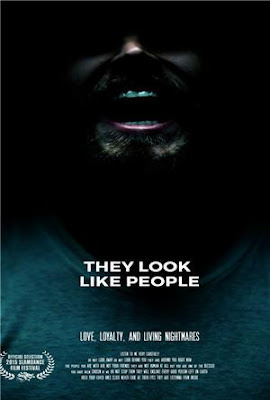 "Excellent Horror Piece About What It Is To Be Human"

One of House of Mortal Cinema's Top Ten Films of 2015 gets a VOD release from Signature as part of their Frightfest Presents label.

Christian (Evan Dumouchel) lives in New York and is working up the courage to ask out his boss Mara (Margaret Ying Drake). He bumps into his old friend Wyatt (MacLeod Andrews) who's visiting the city, so Christian lets him stay at his place.

There's a history of broken relationships and alcohol abuse is hinted at, but what Wyatt doesn't tell his friend is that he receives, or believes he receives, telephone calls in the middle of the night instructing him to prepare for a forthcoming war between humans and the creatures that are gradually replacing them.

Soon Wyatt is filling Christian's basement with weapons and barrels of acid (he's been told by the gravelly voice on the phone that acid is the only effective way to kill the enemy). He gets a phone call from Mara telling him three bursts of thunder in a clear sky will herald the start of the war, and later he thinks he sees Mara transform into one of the things in front of him.

Eventually Wyatt confesses everything to Christian. Where THEY LOOK LIKE PEOPLE goes from there leads to one of the most deliciously terrifying sequences I have seen in low budget horror cinema in a long time. 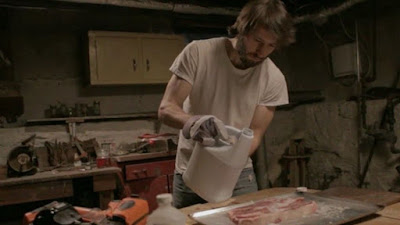 The first feature from writer-director Perry Blackshear, whose excellent THE SIREN is also on release in the UK from Signature, THEY LOOK LIKE PEOPLE boasts fine performances from its three leads and, climax aside, a fine sense of gloomy dread throughout. Is Wyatt mad or is there actually an alien takeover?

What Blackshear does very cleverly is use that raison d'être to explore how people who are friends cope with both their own and each others' psychological frailties and mistakes, and while the film does everything one would wish a good horror picture to do, the sum of what it achieves is much more than that. I do not doubt that the character names (Christian, Mara) have been chosen with care, too. I'm also sure that it's a very deliberate move on Blackshear's part that a movie about creatures that might be pretending to be us is actually about some of the most laudable aspects of humanity itself. Highly recommended.


Perry Blackshear's THEY LOOK LIKE PEOPLE is out from Signature as part of the Frightfest Presents label on VOD from Monday 8th July 2019
Posted by John Llewellyn Probert at 8:58 am