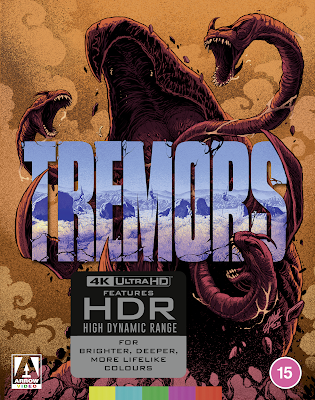 The spirit of 1950s giant monster movies is brilliantly realised in this, the first in the TREMORS franchise (there are now seven films and if you want the complete list click here) which is getting a special edition 4K UHD Blu-ray release from Arrow. 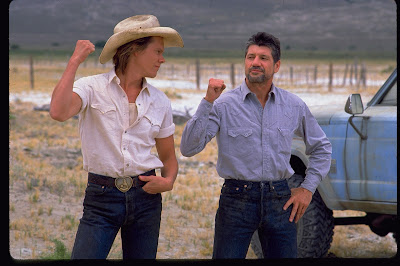 The tiny town of Perfection, Nevada (Population 14) is about to get a rude awakening as four giant earthworm-type burrowing monsters (eventually christened graboids by Victor Wong's Walter Chang character) converge on it, hunting by sound and eating anything that sets off vibrations. Can modern-day good old boy handymen Valentine (Kevin Bacon) and Earl (Fred Ward) save the day with the aid of seismology student Rhonda (Finn Carter)? 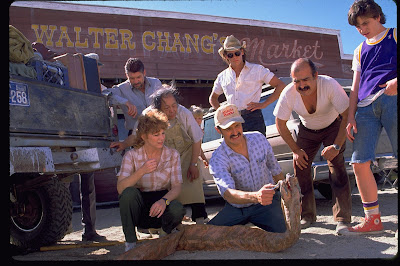 Skilfully and entertainingly pulling off the challenge of making a monster movie with virtually no night scenes and a limited location, director Ron Underwood, working from a screenplay by himself and producers Brent Maddock and SS Wilson, crafted a well-paced, action-packed, light-hearted monster movie that was a big hit. This is thanks to a combination of excellent creature effects and decent acting from an ensemble cast that includes country singer Reba McEntire and Michael Gross, who went on to star in all the sequels. It's all splendid fun & if you've never seen it you're in for a treat. 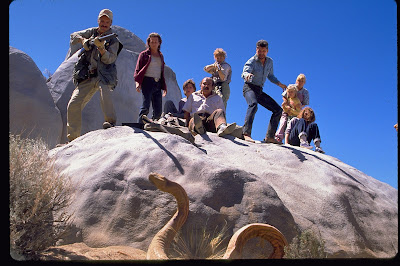 Arrow's disc is a 4K (2160p) UHD presentation that's also going to be available in a Blu-ray release. That said, having compared both versions the UHD image looks fantastic in the outdoors shots but interiors had high levels of picture noise and colours were too bright, even on the lowest resolution HDR setting on our TV. On the other hand Universal's previous Blu-ray transfer, while not having quite the same amount of detail, did provide a warmer image that ultimately was more comfortable to watch. Maybe we're just either too used to Blu-ray technology or we're just getting old. 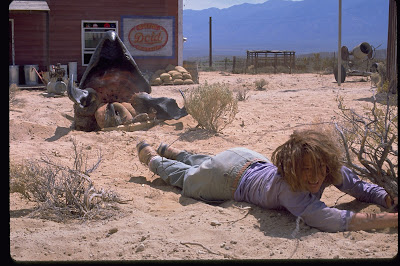 Where Arrow's release really does win out, of course, is in the extras. The old making of from Universal's disc has been ported over but there's loads of new stuff, including (deep breath): 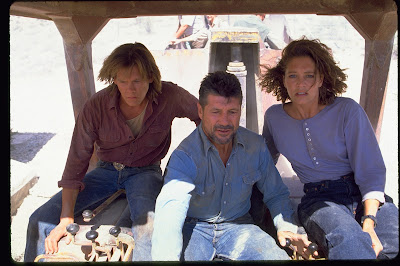 Two new commentary tracks, one from Underwood, Maddock & Wilson and the other from Jonathan Melville, author of The Unofficial Guide to TREMORS; a new making of; new interviews with co-producer Nancy Roberts, DP Alexander Gruszynski, associate producer Ellen Collett and composers Ernest Troost and Robert Folk. You also get 16 minutes of TV overdubs, on-set camcorder footage of the graboids being animated, deleted scenes, trailers, TV and radio spots. 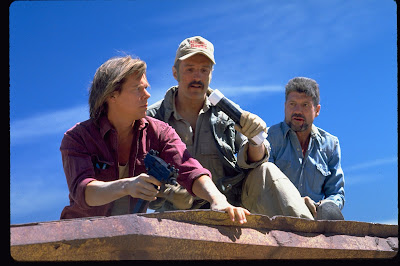 There's also a second disc which includes more interviews and three short films which are all apparently Blu-ray rather than UHD but these were not provided for review. The set also comes with a 60-page book, two double-sided posters (one large and one small), six Front Of House still reproductions and limited edition packaging. 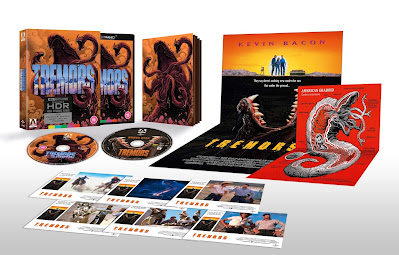 Posted by John Llewellyn Probert at 8:36 am