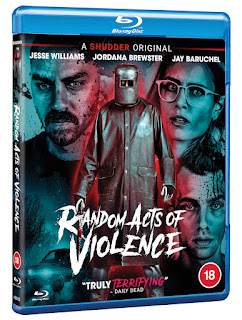 Jay Baruchel stars (along with Jordana Brewster and Jesse Williams) as well as directs, co-writes and co-produces RANDOM ACTS OF VIOLENCE, which is getting a Blu-ray, DVD and Digital release from Acorn Media International. It's one of a clutch of movies that have been airing on Shudder that are coming out in these formats, the others being the rather good TERRIFIED (2017) and the excellent TIGERS ARE NOT AFRAID (2017 as well).

For the literary inclined, it's probably worth pointing out at the start that this film is not an adaptation of Jack Womack's 1993 Random Acts of Senseless Violence, rather it's an adaptation of the comic (?graphic novel) of the same name by Justin Gray and Jimmy Palmiotti. 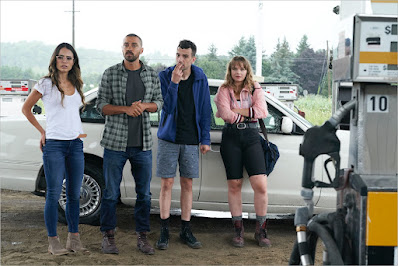 Todd (Williams) is travelling cross-country with Cathy (Brewster) and his publisher Ezra (Baruchel). They're on a tour to promote a comic book Todd created based on the real-life activities of a serial killer called Slasherman, which is nearing its final issue. But Todd's having problems. He can't come up with how to end the series, he's suffering flashbacks to a family dinner that looks as if it's going to end in disaster, and worst of all someone is killing people and leaving their bodies in the form of macabre reconstructions of Slasherman splash panels. 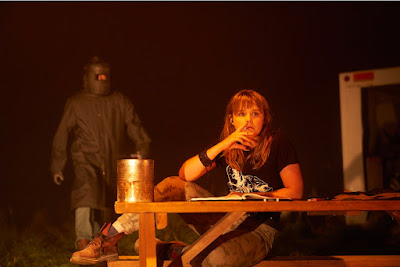 If you're a fan of the giallo genre, especially the wilder ones from the early 1970s, then RANDOM ACTS OF VIOLENCE is just for you. It's got the weird murders, the flashback that we don't understand the significance of until the end, buckets of blood (especially during the climax) and a denouement that's really quite mad but makes the film all the better for it. 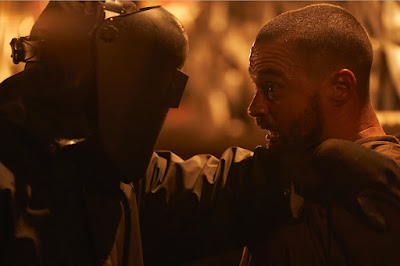 Baruchel's directorial style builds in its manic intensity, and the performances are all fine. In fact its nice to see some familiar faces - Jess Williams will be best known to genre fans from CABIN IN THE WOODS and Jordana Brewster will be familiar to anyone who loves the FAST AND THE FURIOUS movies. Extras include a 36 minute 'lockdown' interview with the director as well as a couple of short making of featurettes,

Jay Baruchel's RANDOM ACTS OF VIOLENCE is out on Blu-ray and DVD and download and keep digital from Acorn Media International now.

Posted by John Llewellyn Probert at 8:17 am