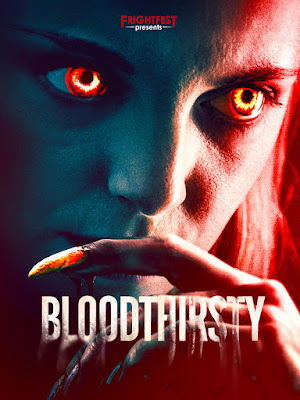 Be advised, however, that Amelia Moses' BLOODTHIRSTY, getting a digital and DVD release from Signature Entertainment is not a musical. Instead it's the psychological (mainly) tale of vegan pop singer Grey (Lauren Beatty) who has two main problems: difficult second album syndrome, and dreams that she can turn into a wild beast with a hunger for flesh.

Blink and you'll miss him Michael Ironside plays the psychiatrist who puts her on anti-hallucination medication before she sets off to the isolated mansion of famed record producer and possible wife-killer (although he was never convicted) Vaughn Daniels (Greg Bryk) who believes he has the ability to bring out her latent genius.

Grey's girlfriend Charlie (Katharine King So) comes along for the ride and to do some Night Gallery-style painting, and the film becomes a virtual three-hander as Grey works on her music by day and her increasing lust for blood by night. But what's that running around and killing things at night while Grey's busy elsewhere? Could the woods already have a beast? And could it have anything to do with how she's feeling? 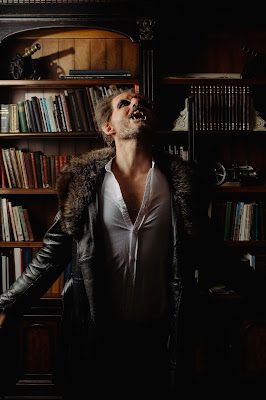 BLOODTHIRSTY is the very definition of slow burn but within that it achieves what it sets out to do well. Acting and direction are appropriately low key and the songs Grey writes (actually written by co-composer Lowell Boland) embellish the narrative well. Don't expect a major special effects extravaganza (although there is quite a bit of blood as we get to the end) and BLOODTHIRSTY is a quiet, unassuming but effective low budget horror picture.

Amelia Moses' BLOODTHIRSTY is out on DVD and Digital from Signature Entertainment on Monday 30th August 2021. Here's the trailer:

Posted by John Llewellyn Probert at 8:25 am