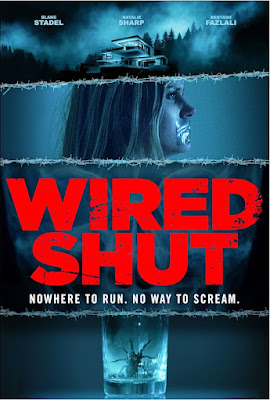 A bestselling novelist gets more than he bargained for when his daughter visits him in his isolated mountain home in Alexander Sharp's  WIRED SHUT, now out on DVD & Digital from 101 Films.

Reed Rodney (Blake Stadel), the novelist in question, has undergone reconstructive surgery to his jaw following a car accident. He spends his days in his isolated mansion reading reviews of his latest work until his daughter Emmy (Nathalie Sharp) comes to visit. The two have a rocky history and it's about to get more complicated when Emmy's boyfriend Preston (Behtash Fazlali) turns up with intentions of robbing Reed's safe.

A film that moves so slowly it's almost standing still, the plot of WIRED SHUT would barely make 30 minutes of television, and the technique of having every line and every action performed as slowly as possible to drag it out to feature length just adds to the tedium on display here. There's decent photography and the production design is the epitome of characterless and cold, presumably to reflect Reed's soullessness. Unfortunately it also embellishes the one-note tone of the performances that make it hard to believe any of these characters are actual people. There's a swath of good horror films out there at the moment but this supremely dull effort is not one of them.

Posted by John Llewellyn Probert at 9:08 am