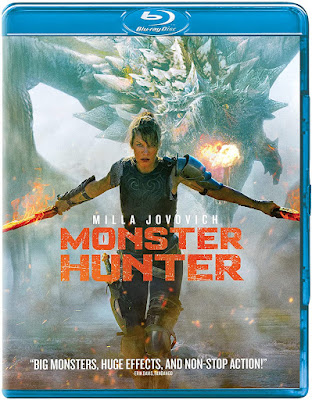 The spirit of Edgar Rice Burroughs (and his pulpy descendants) is alive and well in writer-director Paul W S Anderson's latest video game movie adaptation, which after a minimal cinema release is now coming out on 4KUHD, Blu-ray, DVD and digital from Sony. 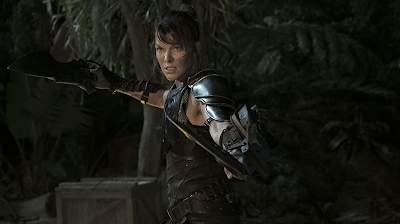 While on desert patrol, a squad of soldiers led by Milla Jovovich encounter a weird storm and pass through a portal that takes them to another dimension filled with dragons, giant cricket things and Ron Perlman and his sand-ship. The ship has encountered a bit of bother before the opening credits, causing crew mate Tony Jaa to become stranded in the same monster-filled wilderness.

After an opening act filled with fast-paced monster action Milla's squads end up as monster food and she has to team up with Tony to cross the desert, reach Ron's ship and get to the tower that's her only chance of returning home. But there are still a lot of great big things that want to stop them all.

MONSTER HUNTER feels like the modern-day equivalent of old Amicus movies like THE LAND THAT TIME FORGOT (1974) and AT THE EARTH'S CORE (1976) only with markedly better effects and a sound mix that will probably bring your house down if you play it loudly enough. In fact the only thing that stops MONSTER HUNTER being one of the best films of its type (and it's a big one unfortunately) is its script, which has a major problem with pacing. We spend over an hour getting our two heroes out of the desert and as such the rest of the movie feels horribly rushed with some fun effects and concepts all but skimmed over. Still, if you're an undemanding fan who wants to see some amazing monster effects (and these really are excellent) MONSTER HUNTER will certainly provide you with a worthwhile 103 minutes.

Extras in Sony's disc are limited to deleted scenes and three short featurettes about the making of the film and the video game that inspired it.

Posted by John Llewellyn Probert at 9:33 am