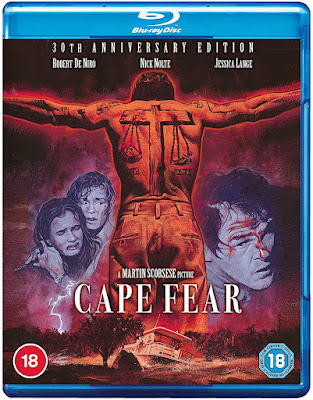 Martin Scorsese's remake of J Lee Thompson's 1962 original (you can read my review of that one here) gets a 30th Anniversary edition on Blu-ray and DVD courtesy of Fabulous Films. 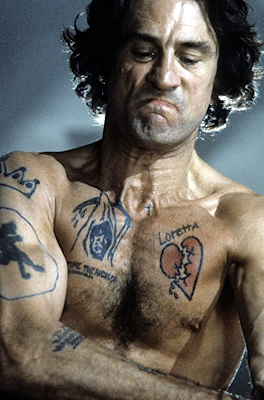 Fourteen years ago Sam Bowden (Nick Nolte) was the assigned defence attorney to Max Cady (Robert De Niro). Bowden came into possession of information that he could have used to get a more lenient sentence for Cady. Because he felt the man deserved to go to prison he failed to make use of it.

Unfortunately for Sam, Cady turned out to be a psychopath who, as well as teaching himself to read while in prison, also got himself fully acquainted with as many texts on legal practice as he could. Now Cady is out, and he fully intends to make life a living hell for Bowden, his wife Leigh (Jessica Lange) and daughter Danielle (Juliette Lewis in her least weird role). 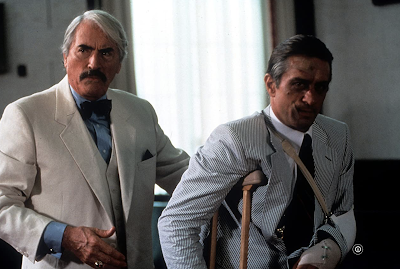 Until I received the press release for this I had no idea Steven Spielberg was originally planned to direct CAPE FEAR and that he did a swapsies with Martin Scorsese for SCHINDLER'S LIST which Scorsese felt might be too controversial. So instead of that, the director of GOODFELLAS and THE LAST TEMPTATION OF CHRIST (the main reason he didn't want to do another film with potentially touchy subject matter) gave us this melodramatic, wildly over the top remake.

The restraint switch is clearly off from the opening chords of Bernard Herrmann's reorchestrated score and if you're the kind of person who is going to wonder quite how Cady manages to be in just the right spot at the right time to menace and irritate the Bowden family so often CAPE FEAR might not be the film for you. But if you fancy a full-on-for-over-two-hours thriller then this is just the thing.

Fabulous Films' disc comes with an 80 minute archival making of, deleted scenes, behind the scenes , matte paintings, a trailer and photograph montages. The new cover you can see up there has art by Graham Humphreys and it's also included as a double-sided poster - one side with text, the other without.

Posted by John Llewellyn Probert at 9:13 am