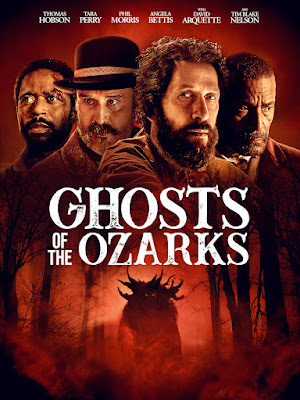 And there just aren't enough of those, are there? So it's nice to see GHOSTS OF THE OZARKS getting a UK Digital release from Signature.

We're in Arkansas just after the American Civil War. James (Thomas Hobson) is a medical man who has been invited by his uncle Matthew (Phil Morris) to come to the remote, isolated village of Norfork where a doctor is badly needed, the previous one having left under mysterious circumstances.

One evening James is beset in the forest by a man who tries to rob him of precious gems he doesn't have. Escaping he encounters a red smoke that seems to contain monsters, after which he almost immediately finds himself at the walled town of Norfork.

It's an odd place. David Arquette keeps trying to sell James hats. The bartender is blind and his wife (genre favourite Angela Bettis) plays the piano in a bar displaying paintings of people dancing in a ring and watched over by horned demons  Pretty soon James comes to realise that there's a lot that's weirder and more sinister going on in Norfork than just eccentric behaviour.

GHOSTS OF THE OZARKS isn't bad at all. The central idea is sound and the acting is fine. The problem lies with the direction and photography, both of which are flat and uninspired, giving the endeavour a 1970s TV episode look but without the graininess. As a result it's very difficult to think you're looking at anything other than actors on a set or a backlot. And that's a shame because with a bit more style and panache GHOSTS OF THE OZARKS could have been something with a very pleasingly weird atmosphere indeed.

Better music would also have been an immense help, especially at the climax and I cannot help but point the finger and Director of Photography, Composer and Co-Director Matt Glass who may have just taken on a bit more than was strictly a good idea. One suspects budgetary constraints made it a necessity, because for all the professionalism on the acting front GHOSTS OF THE OZARKS still feels less a production by experienced film-makers and more a super ambitious student project. You can't fault them for trying, though, and despite what I've said above I actually found GHOSTS OF THE OZARKS well worth a watch, both for its ideas and the extent of its ambitions. Here's the trailer:

Posted by John Llewellyn Probert at 9:02 am